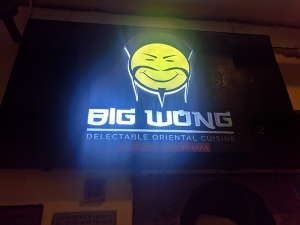 It’s hard to know what to say about Big Wong, a chain with seven or eight locations in the greater Delhi metro, past its logo—I mean, just look at it. There are Chinese restaurants in the US with the name Big Wong as well and if any of them had a logo that looked like this you can imagine how it would be (correctly) read. In India, however, there is little outrage about this sort of a thing—even if my nephews, who picked this as the location for a Chinese meal in Gurgaon in December, were a bit embarrassed about it. On the one hand, the deployment of imagery like this in an Indian Chinese chain—whose owners are not Indian Chinese—does not signify the same things that it would in a contemporary American Chinese chain, precisely because the discourses and demographics of race in India are not the same as those in the US; on the other, and it pains me to say this, it shows just how casual racism in India continues to be. The people responsible for the Big Wong logo would probably be very shocked to hear that there’s anything problematic about it.

This is because, again, there is effectively no public discourse about race in India. Not surprising, considering most of mainstream Indian society has still not managed to recognize—leave alone do anything about—its rampant casteism or its obsession with light skin. Racism in India merges comfortably with systems of discrimination based on caste, ethnicity/region and religion: all systems of discrimination that also cut across class lines.

The fact that there is no public discourse about race in India does not, of course, mean that race is not relevant to Indian society. The treatment of India’s own racial others in places like Delh (though not only Delhi)i—particularly people from the Northeastern states—is deeply problematic; to say nothing of the demonization of African students and immigrants. And lest you think that this sort of a thing is a holdover of attitudes among older people, keep in mind that Big Wong is a chain aimed very much at young, westernized, upper-middle class metropolitan Indians, people who you might think would be more likely to have sensitivities around these issues similar to those of liberals in the West; you would, of course, be mistaken (the word “chink” is used freely in westernized Indian polite society).

None of this is new, of course, but the form it takes now is different. The Chinese restaurants of my childhood, teen years and twenties traded on exoticism as well but in very different ways. Restaurant names were of the Kowloon/Nanking/Golden Dragon variety; and at the time (in the 70s, 80s and early 90s) eating at Chinese restaurants was a mark of a kind of Indian cosmopolitanism. It could be argued that Indian Chinese food was the country’s first true pan-regional food (the other contender being South Indian food of the idli-dosa-vada complex) and it was probably true that this food, thoroughly Indianized as it was/is, was what people who otherwise ate only the food of their own regional community would be most likely to eat when stepping outside their home (cuisine). And at the high end in the late 80s and early 90s the name restaurants at Delhi’s elite five star hotels were either Northwest Frontier Indian or Chinese. Now, however, the metropolitan Indian restaurant scene is quite transformed and Chinese food has dropped quite a few spots in the cultural cachet rankings. And so a newer Chinese restaurant venture like Big Wong both skews pan-Asian and is more apt to go for a kind of edginess which also sometimes grants us things like their logo.

These hipper new restaurants are very much not throwbacks in terms of their aesthetic. To walk into a place like Big Wong—and I walked into the branch at the Cross Point mall in Gurgaon, also home to Khyen Chyen—is very much not to enter a time warp. The decor is decidedly modern. And this modernity, as I indicated above, is signified by a pan-Asian rather than old-school Indian Chinese menu. This is not to say that the greatest hits of the old-school Indian Chinese menu are not represented at Big Wong, for they are. You can still get your chicken sweet corn soup, your chilli chicken and your hakka noodles. But you can also get Thai, Indonesian and Japanese dishes (all have themselves been Indianized in turn). But despite all this novelty there’s not much change in how the Indian Chinese dishes taste.

We were a group of five and we were not particularly hungry and so we did not get a massive amount of food. I got a bowl of chicken corn soup (as I always do when I eat at a Chinese restaurant in India); others shared bowls of their hot and sour and tom yum soups. We then got an order each of their chicken in brown chilli sauce, their shredded lamb in Szechuan sauce, their hakka noodles and a veg fried rice. We’d also ordered a chilly chicken starter but it never showed up—just as well as we didn’t even finish all of what did show up. All of it was just good enough to satisfy my nostalgic palate; but none of it was anything worth getting excited about (I am sorry to say that this is how I feel about most Indian Chinese food these days—I go back to it mostly for nostalgia; and yes, I should probably try one of the newer-fangled places like Fatty Bao on my next trip).

For a look at the food and the restaurant—and other aspects of its visual presentation), please launch the slideshow below. Scroll down for notes on service and value and to see what’s coming next. 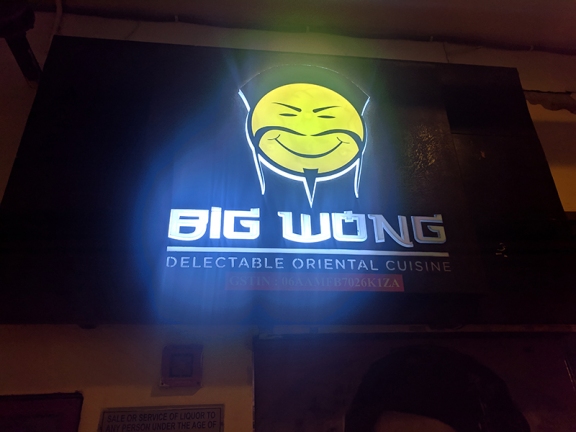 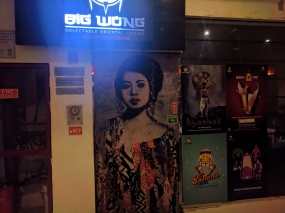 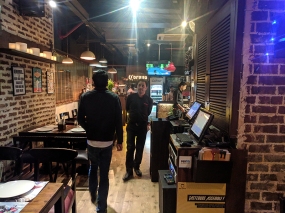 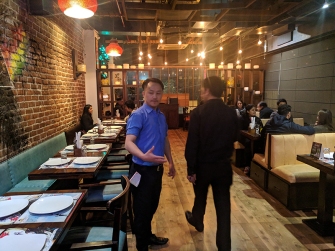 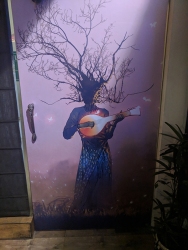 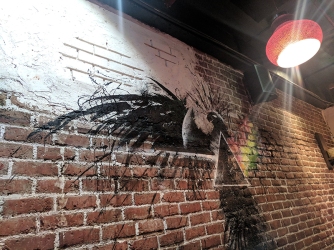 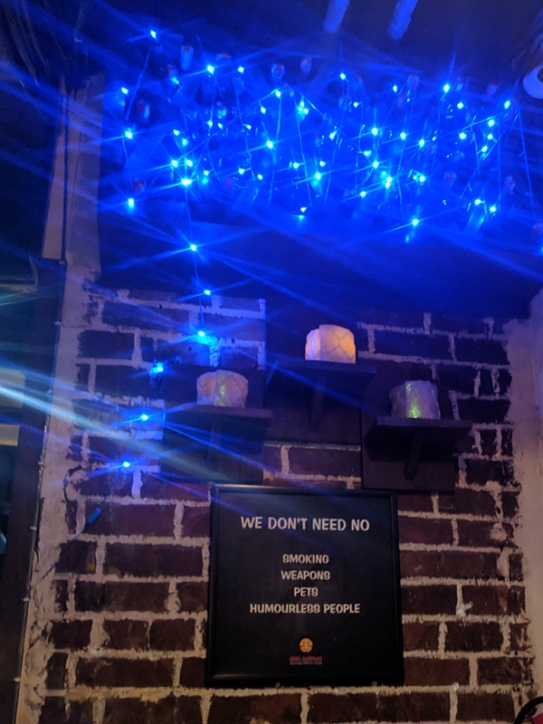 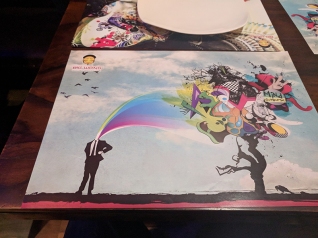 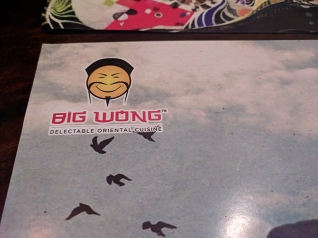 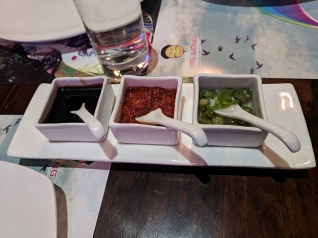 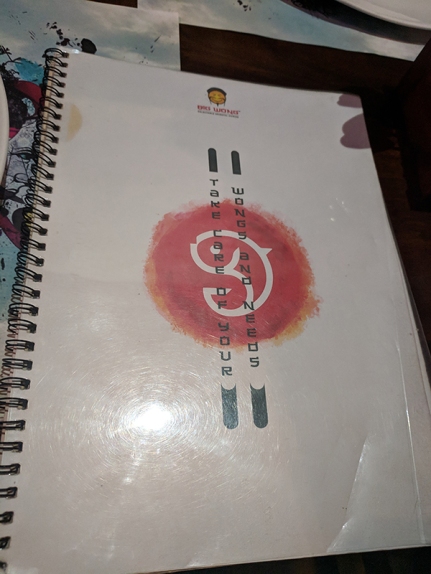 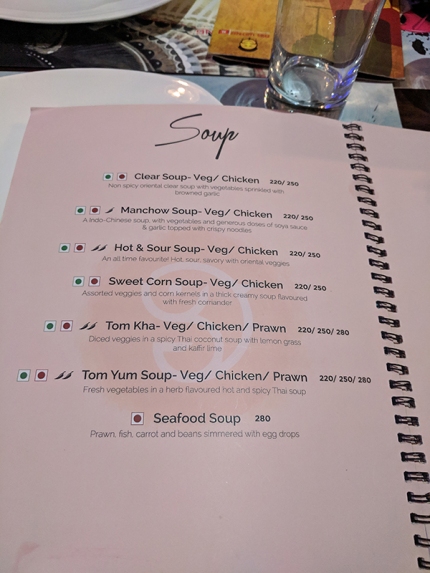 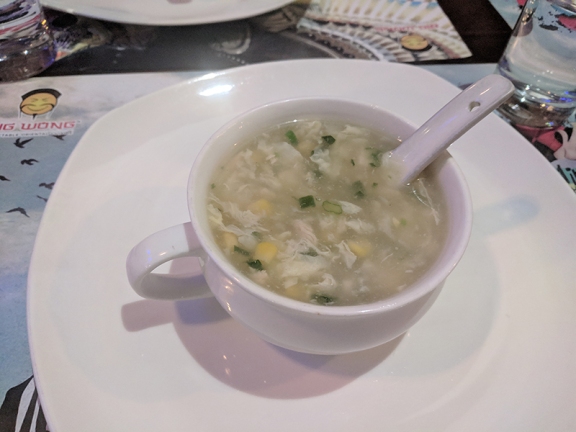 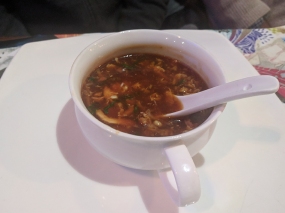 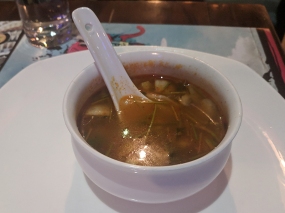 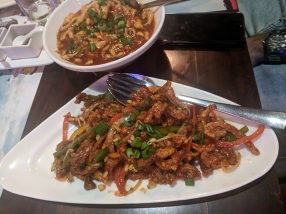 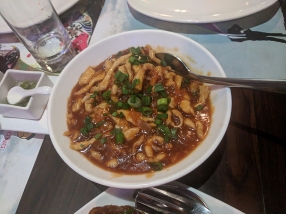 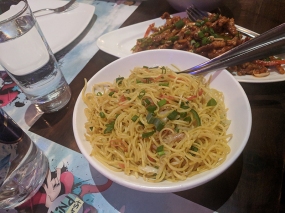 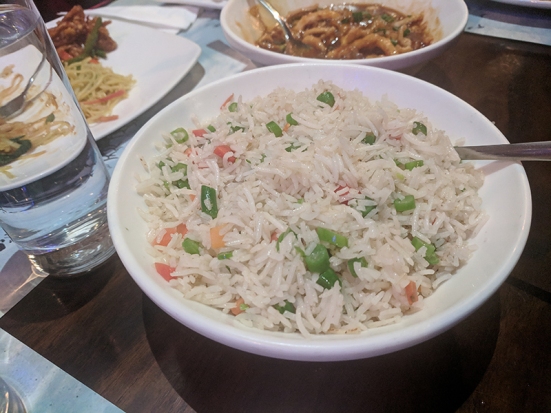 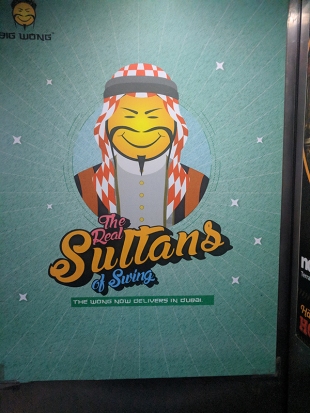 They apparently now have a presence in Dubai as well.

Service was in the usual overly present Delhi mode but it’s easily defused. Prices seemed reasonable—I was not paying and so cannot tell you what the bill came to, but based on menu prices it wouldn’t have been anything out of keeping with the quality of what we ate.

Next up from Delhi: a return to Cafe Lota, which on my visits in 2014 and 2016 was probably my favourite restaurant in Delhi. And I really do want to sit down and finally write up the third installment of my series on Indian food writing in America—actual work is taking up the time needed for that piece but I do hope to get to it very soon.