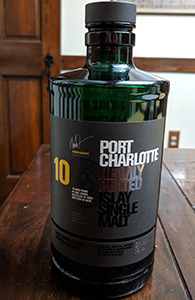 I have not really been keeping track of what has been going on with Bruichladdich’s official releases in recent years, and that extends to their heavily peated line, Port Charlotte. The regular Port Charlotte 10 yo—as opposed to the various annual releases in the PC5-11 line that led up to it—was first released in 2012 or 2013 but its status after that was not very clear. I don’t think it ever became a regular part of the range. I reviewed a bottle from that early release—back then they came in the same clear bottles as the then-new Bruichladdich 10 did—and thought it was solid but nothing special. Since then my Port Charlotte exposure has been limited to the PC releases and the occasional independent release (see, for example, the excellent Pl1 from the Whisky’s Exchange’s Elements of Islay line, a heavily sherried iteration). But a new version of the Port Charlotte 10, in new Octomore-dark livery, showed up last year and was positively reviewed by people I trust. That put it back on my radar and when I saw a bottle at a reasonable price in a local store I picked it up. I opened it for one of my local group’s tastings and it was received very well. At the time I thought there was way too much of the butyric note on the nose that I find in almost all modern Bruichladdich, but I did like it. Curious to see what it’s like now with more air in the bottle.

Nose: Big butyric blast off the top still: starts out pukey but thankfully transitions quickly to sour butter. And man, does that sour butter hang on for a while! Beneath it there’s some acidic smoke and some salt but the butter reigns supreme! It takes about 15 minutes for it to burn away enough to let the other notes emerge and then there’s a fair bit of lemon and salt and ashy smoke. More lemon with water and the butyric notes are all gone now.

Palate: Nothing butyric on the palate, thankfully. It starts out a little blank with thin smoke but then there’s a big burst of ashy smoke and vanilla and also coastal notes (kelp, brine). On the second sip there’s lemon here too but also some chalk and some tart apple. With more time the smoke is more sooty/coaly and there’s very nice balance between it and the sweeter and more acidic notes. With water there’s less smoke, more sweetness (wet stones).

Finish: Long. The smoke keeps going, getting ashier, and the salt keeps pace with it. As on the palate with water.

Comments: Very good, but I do wish there was far less of the sour butter on the nose to start. Once it burns off, though, this really shines.