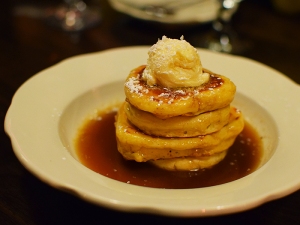 St. Dinette opened in St. Paul’s Lowertown almost exactly four years ago. They immediately got a lot of good local press. Rick Nelson of the Star Tribune gave them 3.5/4 stars and that was more or less representative of the local acclaim. The restaurant’s pedigree was established—-opened by the proprietor of St. Paul’s The Strip Club (now closed) and featuring a chef and general manager from local legend, La Belle Vie. Even though our own opinion of La Belle Vie diverged dramatically from those of many people in the area (our last meal there was eaten before I started the blog), we were intrigued by Saint Dinette. In the early going, however, they did not take reservations and this was a big problem for us as our children were (and still are) young and it’s hard to do the babysitter thing not knowing how long you’re going to be away (keep in mind that any Twin Cities meal includes a two hour round trip for us). At some point, however, Saint Dinette started taking reservations and so we put them back on our list. And last weekend we finally made it there with four friends who’ve joined us at a number of other meals. What did we find? Read on.

First, a bit about the restaurant. Their conceit is North American cuisine following the St. Lawrence river to the Mississippi down to the Gulf of Mexico—so French Canada, the American heartland to the Gulf Coast of Louisiana and Mexico. A winning combination to be sure, at least on paper. In ethos they represent the New Fine Dining: casual, and re-articulating dishes from the American vernacular in a high-end idiom. How did all of this work out for us in real terms? Not so well, I’m afraid.

Our reservation was at 7.30 but we didn’t get there till almost 7.45. This because parking was all but impossible to find. We finally made it into a parking ramp/lot a couple of blocks away and even in there had to descend roughly 500 feet before we found a spot. Our table was waiting, however, and we sat down happily in a bright room with lots of natural light streaming in through large windows and ordered some drinks. This, alas, was to represent the high point of the evening from a food and drink standpoint. The cocktails we got to start were uniformly very good but the food that followed was uniformly uninspiring. None of it, I thought, was bad (some of the party disagreed) but none of it seemed like it had any real identity and the meal as a whole did not cohere in any way. Most damning: with the exception of a dessert there was nothing that any of us wished that we had a whole order of to ourselves or that any of us wanted to come back and eat again.

What did we eat? We asked our server what on the menu would be shareable among six people. She suggested that the smaller plates would all be shareable and indicated which of the larger plates she thought would be as well. This is what we got:

Launch the slideshow to take a look at the space and what we ate and drank. Scroll down for more detail on drinks, service, cost and my thoughts on the meal as a whole. 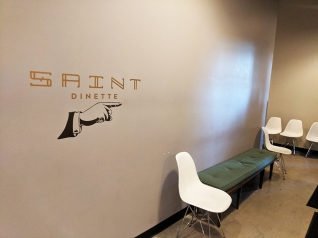 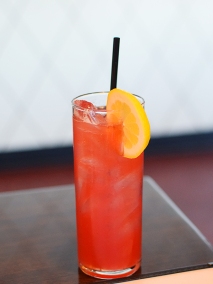 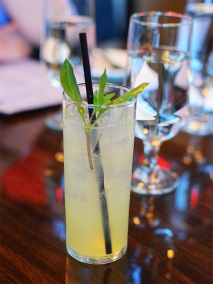 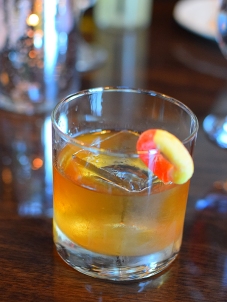 Too much going on. 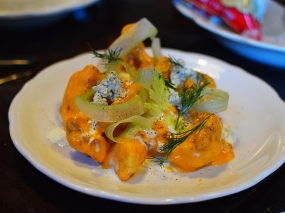 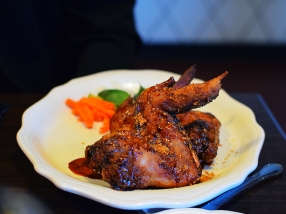 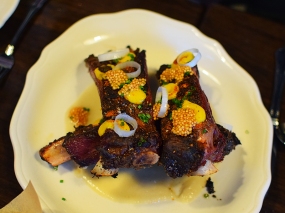 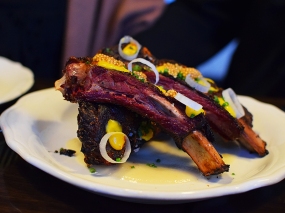 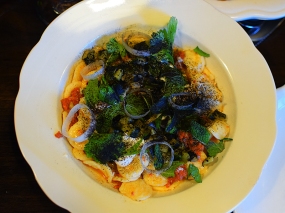 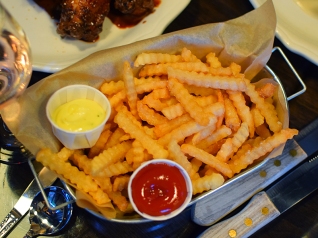 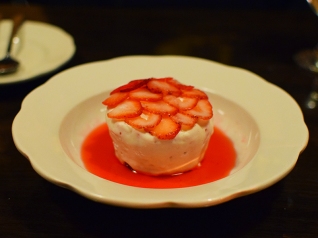 If the food didn’t rock our boats, the drinks were uniformly good. Five of us got cocktails to start:

Two people got the Hold My Bag, in case you’re worried about the count. I had the Old Fashioned and rather liked it as I did the sips I sneaked of all the others.. The sixth, a teetotaler, got their house-made soda—he was enjoying it till the server cleared his 1/3-full glass when he wasn’t looking. The drinkers went on to split a bottle of rosé.

A little undue grabbiness aside, the service was pleasant and present. The space, as I noted, is nice and bright. But while it was full when we got there it had begun to clear out by 9 pm. None of the tables that cleared after 8.30 or so seemed to get a second seating. I don’t know if that’s unusual for a Saturday night at Saint Dinette—and the weather was very nice—but it was a bit of a contrast from our other recent meals.

All of the above plus tax and tip put us at just about $63/head. Which is not terribly expensive by Twin Cities standards but seemed both too much for the quality of what we ate—none of which popped in any way—and not a good value compared to our recent meals at Hyacinth ($65/head) and especially Hai Hai ($44/head). In fact, our more expensive meals at In Bloom ($72/head) and Popol Vuh ($80/head) were better value as well. We’d go back to all those places many times over before returning to Saint Dinette. Though I am told that the cheeseburger at Saint Dinette is very good—I think the only circumstance in which I could see eating there again anytime soon would be solo at the bar, getting the cheeseburger and the flapjacks. It would have to be solo because the missus really did not care for the meal.

Well, this brings our hot streak with high-end/trendy Twin Cities restaurants to a halt. Again, it was not a bad meal per se but it was an utterly ordinary meal. We’re hoping our next St. Paul outing will be a bit better—we are booked at the Handsome Hog at the end of next week. If you have recommendations for things to get or avoid there, please write in below. And please also write in if you have vigorous disagreements with my/our takes on the current menu at Saint Dinette.