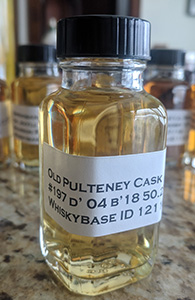 Let’s stay in the northern highlands of Scotland and go a little further up, well all the way up the coast to Wick to Pulteney. This is, of course, the itinerary we covered in the June of 2018 on our way from Dornoch to Orkney. We stopped briefly at Clynelish and then longer at Pulteney where I took the surprisingly excellent tour. “Surprisingly excellent” not because I had any reason to think it wouldn’t be good but because Pulteney rarely seems to come up when people talk about distillery tours in Scotland. Anyway, I recommend a tour of Pulteney highly, though I’m not sure there’s much else to recommend Wick to someone on a short visit to Scotland.

This particular release was a single cask, filled in 2004 and bottled in 2018: cask 197, a bourbon barrel. Which, I guess, after Monday’s Clynelish 23, means both that we’re staying in the northern highlands and staying with bourbon casks.

Nose: Briny with some malty sweetness; on the second sniff there’s some apple cider and a bit of lemon peel (a slight waxiness too). The waxiness expands as it sits as does the lemon peel. A couple of drops of water bring out more of the maritime notes and also more of the wax.

Palate: Comes in sweet and biscuity—quite unexpected after the brine on the nose. Highly drinkable at full strength with nice texture. The sour notes of cider emerge on the second sip and there’s a dry leafy thing as well. The wax and lemon expand here too with time. With a lot of time the sweeter, maltier notes begin to pop out again. Maltier still with water but the lemon peel expands as well; the pepper shows up earlier too now.