Our first meal in New York, eaten shortly not too long after arrival from DC, predictably/stereotypically/appropriately/conveniently involved pizza. We were staying on the Upper Westside, in a neighbourhood described by my primary sources of New York food recommendations as a bit of a food desert. But a short walk north from our apartment put us at a pizzeria that has received a lot of attention, and a New York Times star, in the last year: Mama’s TOO! at Broadway and 106th Street. As the name indicates, this is an extension of an existing brand. Mama’s Pizza, not too far away, has been serving up traditional New York slices for a long while now. Mama’s Too! (the exclamation mark is part of the name) takes that pizza in some new directions, both crust and toppings-wise. I do not pretend to be a pizza savant of any kind—if you’d like to find out more about where they fit in or depart from the larger New York scheme of pizza please take a look at Pete Wells’ review. Read this only to find out what four people who do not have any sort of firm ideological position on pizza thought of their offerings on one hot August evening.

When I say that Mama’s Too! was only a short walk from where we were staying I mean that it was a short walk in the context of how much we walked every day on our trip: we averaged between 4 and 6 miles a day, every day. Mama’s Too! was about 17 blocks or 17 minutes from our base. We arrived there shortly after 7 to find it full and a long line snaking out the front. This, I gather, is courtesy the New York Times attention. Most of the people in line with me—the missus and the kids meanwhile grabbed four of the very few seats available—were New Yorkers themselves but many were clearly eating there for the first time. There was a fair bit of confusion among us first-timers about how things work, none of which was helped very much by the general atmosphere of stress behind the counter.

This is how it is set up: there is one line that ends with one person taking orders behind the counter. When you get to the head of the line you place your order. There is no visible menu. You choose from what has recently emerged from their ovens and been placed in the display case to your right. What these things are you find out by asking the stressed cashier who is simultaneously talking to the chefs behind her and to people waiting for takeout orders behind you and handing slices to people who ordered before you.

When you get to the front you can only choose what is currently on display. If there is something else that they may have recently put in the oven but which has not yet come out you cannot choose to pay for it in advance and get it when it is ready. You have to take what is available now and pay for it and get back in line again later for what may come out 1-30 minutes later. The thing you pay for now may need to go back into an oven for 30-60 seconds before it is given to you. While this is happening you have to squeeze yourself between the line and the wall to its left. If you stand to its right you may get yelled at by the owner/chef even if the cashier told you to stand there* because that bit of real estate is for people picking up takeout orders. At the restaurant, by the way, you order by the slice; but doing takeout you order by the pizza—at least there’s no slice option in their takeout menu online. So if you want a bunch of different slices to go I think you’ll have to come to the restaurant.

Many of the people ordering in line also get their slices to go. If you want to eat there, as we did, you have to hope that at least some of the 4-10 available seats will open up. You will get your slices in a box and take it to whatever fraction of a table you’ve managed space at and eat it there, while being jostled by people either in line or leaving with their pizzas/slices. We got lucky as a four-top opened up right as I got in line and no one ahead of us seemed interested in it. I brought our slices and a glass of red wine in a plastic cup (because I am classy!) to the table and we got down to bidness.

What did we eat? Pickings were slim when I got to the head of the line. Accordingly, I got three slices of their house pie, one each for the boys and one for us. This is basically their take on the Margherita. Pete Wells says of this that “you can hold it in the air by the curved rim and it will stay flat and parallel to the floor” but this is a dirty lie. All three of our freshly emerged slices sagged as we had in the DC humidity earlier in the week. All three of our slices were also utterly delicious—though the boys did not enjoy the bulging crust as much as we did. The missus and I also shared an equally saggy slice that featured pepperoni and jalapeno and a firm square of their funghi pizza with mozzarella, ricotta, sauteed mushrooms and caramelized onions. The former was very good, the latter was excellent. And the boys split a square of the pepperoni which they loved.

These are big slices, if not uniformly sized, and the crusts were all thick and bready, especially the squares. We were thus quite full after this. However, I had a bee in my bonnet about trying their cacio e pepe pizza, which Wells had mentioned in his review. This sudden obsession led to a downturn in the quality of the evening but more on that below. First please take a look at these extremely crappy cellphone photos (the place was too hectic to fuss with a camera).

Hopping on a Friday evening.

This being New York the two people right in front of me were South Asian.

Signs of a larger menu, long since abandoned. 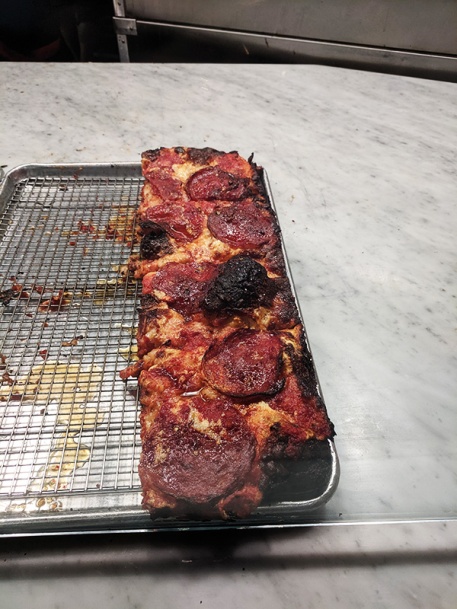 Some of what was available when I got to the front of the line.

They have a small selection of drinks. 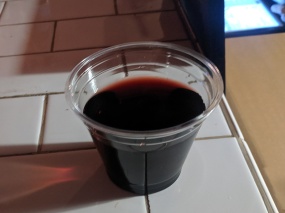 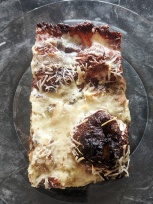 Somewhat light on the pepper but very tasty, lightly heated the next day.

And this more toasted square was very good too. Note the differences in size.

So, the cacio e pepe saga. When at the front of the line I’d asked the cashier if they would be putting some of it out soon. The chef said it wouldn’t be for another 20 minutes. Fine, I said, we’ll be here at least that long, can you let me know when it’s ready? The cashier told me she would and that I could just come to the head of the line then. However, it wasn’t yet out when we got done about 30 minutes later. I went back to the cashier to ask if it would be ready soon and she told me it would be but that I would have to get in the back of a line of others who were waiting for not yet ready pizzas. That line not being very long I got back in it. Five minutes later there was still no sign of the cacio e pepe and so the missus and the boys turned for home while I decided to wait a bit and catch up with them.

Another 10 minutes went by and the line got very long again while there was almost no pizza of any kind available. This did not help the kitchen’s stress though the owner did kindly send a bowl of pepperoni down the line for those waiting to enjoy. Then more pizza began coming out but none of it was the cacio e pepe that the four or five of us who had been waiting from the beginning were hoping for. At this point the line of new customers diverged from the waiting line, and shortly thereafter everyone else waiting for the cacio e pepe gave up and just got what was coming out, leaving me waiting alone. I figured having given 20 minutes to the cause I could give another 10. Five minutes later two things happened: the cacio e pepe finally came out and the cashier told me I had to go to the back of the ordering line! Thankfully, before my head could explode the owner/chef intervened and told her to just give me what I wanted. Having waited as long as I had, I took two squares instead of the one I’d wanted. Of course, by that time my appetite had evaporated and so I took them back to eat the next day.

All this to say, don’t go to Mama’s Too! at 7 pm on a Friday. The thing do, apparently, is to go between 3 and 5 on any given day. And whenever you go, don’t get your heart set on eating something they may not have yet prepared. Choose from whatever they have and be content in the knowledge that it will be very good. And, oh yes, if you do get a square or two of the cacio e pepe to go and heat it up in a toaster oven for breakfast the next day you will still be very happy.

So, a stressful meal in more ways than one but a very delicious one and also a very fairly priced one. I want to say that their slices and squares top out at $4.50 apiece (or thereabouts). These are, as I said, very large slices. Most people would be more than satisfied with two, I think. I had hoped that we might be able to go back later in the trip and see if some of their other slices were available but, alas, it did not come to pass. We did have more pizza on the trip though—more on that in a few weeks. Next up from New York will be dinner in Midtown; before that, however, I’ll have a report on a Lao meal in DC.

*This happened to me; he also told me the cashier had not told me to stand there; having watched Seinfeld, I did not argue.