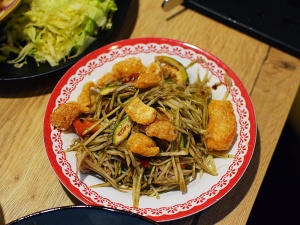 There one of the hottest restaurants in town is Thip Khao which opened in late-2014 and has garnered strong reviews ever since. That kitchen has spun off other establishments. The owners opened Hanumanh in May of this year. This was just a month or so after the opening of Laos in Town, whose chef Ben Tiatasin is a graduate of Thip Khao’s kitchen. All these restaurants are also far from the mom and pop aesthetic of the vast majority of Twin Cities restaurants where Southeast Asian food of any kind or quality can be found. The major exceptions are Hai Hai (which we liked a lot) and Lat14 (which we hope to visit soon) but both of those are pan-Southeast Asian restaurants. There is nothing wrong with that per se but it is interesting that the city with one of the largest Lao populations in the country cannot support a specifically Lao restaurant. (In a seeming reversal of the situation here, as per the Washington Post, Laos in Town’s owner and chef are both from Bangkok; it’s not clear if either is ethnic Lao.)

Of course, the DC metro’s general population is about twice as large as that of the Twin Cities’ metro but you’d think the greater Lao presence would make up for that. And as far as I can make out, DC’s Lao restaurants are similar to Hai Hai (and I expect Lat14 as well) not only in design aesthetic but in the fact they’re pitched at or at least seem to attract a mostly non-Lao clientele. Are the DC equivalents of the mostly-white, hipster’ish Twin Cities crowd that fills Hai Hai on a regular basis more receptive to granularity in immigrant cuisines? Is there a lower level of awareness among mainstream diners in the Twin Cities of the spectrum of immigrant groups here? At any rate it would appear that our Lao restaurateurs know that they cannot survive only by appealing to fellow Laos—otherwise I’d expect there would be specifically Lao restaurants aimed at them just as there are any number of Vietnamese restaurants; but the way to get non-Lao people in seems to be to fly under the Thai banner.

Can we expect any more in a metro this size? Or are we just behind the curve here? Is it just a matter of time? Or is it (also) a matter of raising awareness about the diversity of immigrant groups and cultures in the state? Of course, it’s not just a question of non-Asian diners’ expectations or preferences: at Cheng Heng most non-Cambodian Asian diners are likely to have bowls of pho on their tables. Then there’s the larger question of when the economic status of groups like the Lao and the Hmong in Minnesota will rise enough for there to be a vibrant food scene that does not depend on diners from mainstream or other immigrant communities. (And I don’t mean to suggest that an improved food scene is the most important reason to hope for greater income equality.)

Anyway, I do not have answers to these questions. If you do, or if you find them wrong-headed in some way, please write in below. For now let me tell you what our meal at Laos in Town was like. Oh yes, in case you’re wondering why we didn’t eat at Thip Khao it’s because we picked the one week they close for summer vacation to visit DC. So what did we eat at Laos in Town and what did we think of it? Read on.

The restaurant is located in the NoMa neighbourhood, a short cab ride from our hotel. We arrived to find an attractive restaurant with seating divided between a large outdoor area and a large dining room. A bar which faces both indoors and out ties them together. The restaurant is bright and attractively done up. There are a lot of Lao and more general Southeast Asian signifiers but nothing over the top. The menu is not small but it’s not overly expansive either. It is divided into sections for starters (including a lot of street food), salads, curries/soups, main dishes, and desserts (only a couple). There’s also a vegan menu and, as expected in a restaurant of this profile, cocktails with Southeast Asian flourishes plus wine and non-cookie cutter beer.

We were joined at dinner by an old, dear friend from my high school days in Hyderabad. She wasn’t very hungry and we had eaten lunch at Hill Country that day. That was a heavy, meaty meal and so we were not exactly famished either. So, three adults and two children. This is what we got:

A couple of dishes came with sticky rice and we also got an order of regular steamed rice.

For a look at the restaurant and the food, please launch the slideshow below. Scroll down for thoughts on the meal as a whole, on service and on value. 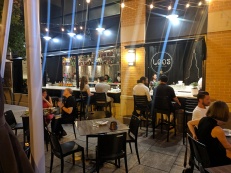 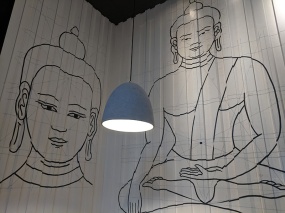 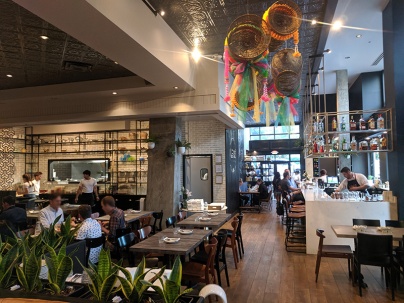 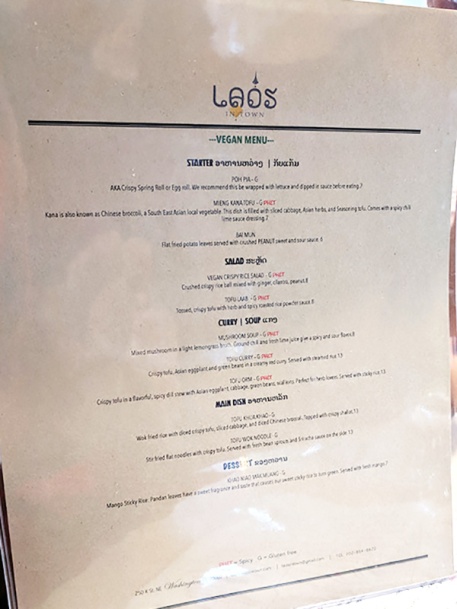 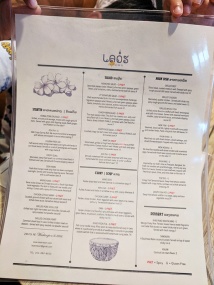 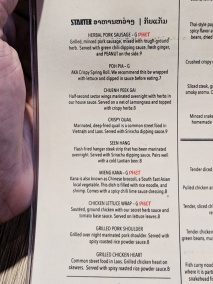 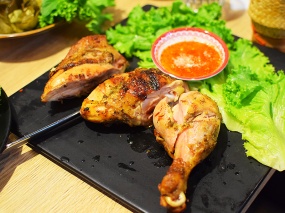 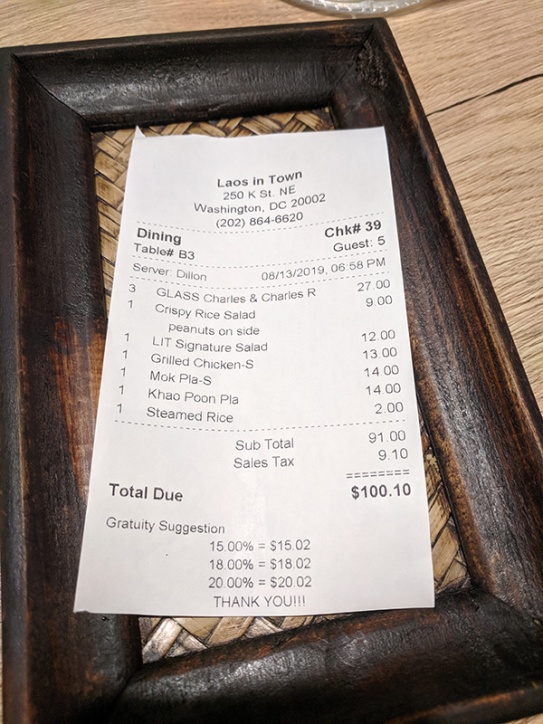 All of the above plus three glasses of wine, tax and tip came to almost exactly $120. Counting the boys as one adult diner that’s $30/head all-in, which is probably pretty good for DC. We didn’t order vast amounts of food and didn’t generate leftovers but we were well sated. As to whether that would have been the case with a lighter lunch and/or a larger dinner, I don’t know.

The food, on the whole, was tasty and, as I said, hit the spot that night after meaty heaviness at Hill Country that day, and a lot of fried stuff at Baby Wale the previous night. But none of it got me very excited. Now I have no way of knowing whether the food here is more on the Lao end of the spectrum than similar dishes served at Thai-focused restaurants in the Twin Cities but I found the papaya salad, for example, to be much lower on the fish sauce funk and not quite as hot as the Lao-style papaya salads at the better places here. And the khao poon, as I said, had less soup and heat than the ones we like here. And while the nam khao/crispy rice salads we enjoy in the Twin Cities may well be more in the Thai than Lao end of the spectrum, we do prefer those as well. In fact, of the three dishes in common between this dinner and our meal at Lao Thai a while ago, we’d pick Lao Thai’s versions.

Service, alas, was spotty. Our server was personable but neither very knowledgeable about the menu nor reliably present. When we ordered he said he would make sure the grilled chicken for the kids and the two salads would come out first; but in fact the khao poon and the steamed fish came out first!

None of this should be read as discouraging anyone from eating at Laos in Town. If I lived within reach of it I’d stop by often. However, on our next trip to DC—whenever that will be—we’ll make it a point to first go to Thip Khao. If you’ve been to both and can offer comparisons please write in below.

Coming up next on the food front, another New York report and then an account of our lunch at Rasika in DC. Both this week, I think.