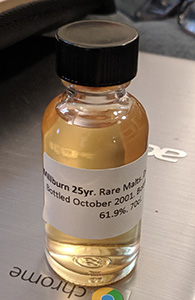 Millburn was established in the Northern HIghlands in the early 19th century, though it appears to be unclear as to when it actually started distilling whisky on the regular. In the middle of the century it was repurposed as a flour mill and only returned to distilling whisky in the 1870s. It then changed owners a few times before becoming part of DCL—one of the precursors to Diageo—in 1937. It then remained in operation before closing in 1985, one of the later casualties of the downturn that saw so many distilleries close in that decade. Unlike some of those distilleries, however, Millburn never really ascended to cult status after its demise. This is perhaps due to the fact that very little Millburn has ever been available. The only one I remember seeing in the US is a G&M release. I stared at bottles of it on shelves in Minnesota more than a decade ago but never got around to buying one. This, therefore, is my first Millburn, a 25 yo released in 2001 as part of Diageo’s Rare Malts series. I’m curious to see what it’s like.

Nose: Quite austere and closed at full strength (no surprise). There’s a malty sweetness and some medicinal notes (aspirin) but not a whole lot else at first—maybe a bit of lime? Let’s give it some time and air and see if it opens up or if water will be needed soon’ish. With time there’s some softer, sweeter fruit (peach?) and some cream. With a few drops of water there’s more fruit—plum, cherry, more peach.

Palate: All the early stuff from the nose is more expressive on the palate: lime peel, malt; and it’s sweeter here. Not a huge alcohol bite at full strength but quite tight. The lime peel expands as it sits and the cream from the nose begins to emerge here. With time there’s a sooty edge/wet wool’ish to it. Okay, let’s add some water and see what happens. Some sweeter fruit emerges here too but it remains more austere on the whole.

Finish: Medium. Not much happening at full strength at first. Begins to uncoil here too with time and there’s some peat in the hot tarmac genre. Water brings out the oak, finally—spicy rather than tannic.

Comments: Austere, old-school Highlands malt. One to contemplate and drink slowly to see everything it has to offer.