Hot on the heels of my review of lunch at Rasika in DC comes this review of dinner, almost exactly a week later, at Adda in NYC. Adda may be the hottest Indian restaurant in New York right now, at least among the foodie set. While sketching out our meals I asked New Yorkers on Twitter to recommend Indian places and Adda was the one that showed up on most people’s picks. And when I went about making plans to eat out with various groups of people it was the one that kept getting mentioned as a place people would be happy to go to.

As it happens, I went there with a group of people from Mouthfuls, the venerable New York-focused food forum. We’ve all known each other for a long time online and we’re all huge pains in the asses and most of us not easy to please. But we liked the food at Adda. Herewith the details.

Adda opened almost exactly a year ago in Long Island City and has been, as noted above, very well received—receiving, among other plaudits, two stars and a very positive review from Pete Wells in the New York Times. He hailed the restaurant as a welcome return to traditional Indian cooking in a contemporary milieu that seems to be all about “updated” or “elevated” takes on classic dishes in the inevitable small plates format. I was curious to see to what extent this promise would be kept, especially as the proprietor and chef are also associated with a restaurant in Manhattan that fits the description above of the mod places.

Well, the first thing to be noted is that, unsurprisingly, Adda shares the design trappings of the newer Indian places. Like them it traffics in the new forms of kitsch of Indian restaurant design in the West (see my thoughts about that phenomenon here). Adda’s version—which takes the form of Indian newpaper and magazine pages deployed as wallpaper—is more to my taste than what I found later in the week at Baar Baar and Bombay Bread Bar, but I can’t say that seeing Narendra Modi, even in cartoon form, is generally good for my appetite. As for the space, it is narrow, filled with uncomfortable chairs and loud. So, a contemporary restaurant. How about the food?

The menu is divided into three main sections: appetizers that include chaat and pakodas and three meat dishes that no Indian would think of as appetizers; a selection of dishes made in the tandoor; and larger plates, vegetarian and non-vegetarian. There are also a few sides plus breads etc. The choices are a canny mix of the less common and the expected. Goat liver and brains, yes, but also butter chicken and palak paneer and a dal that is basically dal makhani. Of the former, I found a bit too much of a rich sameness in the flavours of the liver and brain dishes—I preferred the keema pao to both (and the brioche’ish pao served with all three dishes was very good). Of the latter, I didn’t find anything notably different about their butter chicken or dal—though both were acceptable. I did, however, like their palak paneer, with decent paneer for a change and a focus in the rest on greens and not cream. Their biryani was as ho-hum as that served at most curry houses. The goat curry was fine in an Indian railways kind of way, though the meat was inconsistently tender. Those looking for kormas will meanwhile be happy with their lotus root kofta.

Among the actual snack’ish appetizers, the dahi batata puri was made very well but was too sweet for my liking. I much preferred the crisp kale pakodas and the alu-channa chaat. The tandoor section yielded two big hits: the bhatti da murgh—a coriander and cumin crusted chicken leg; and especially the whole pompano, cooked just perfectly. It also featured the biggest bust of the meal: tandoori cauliflower that had good flavour but was texturally a mushy mess. Is this how they normally do it? If so, they should stop. What else did we eat? Paneer khurchan, which was just okay; seasonal saag, a mix of greens, again cooked sans cream, which was very good; baingan bharta, which was no better than what I turn out without paying too much attention. I don’t know if they have desserts but we were too full to eat any anyway.

For a look at spectacularly crappy photographs of the space and food please launch the slideshow below. I used my cellphone to take pictures and while Android’s Night Sight mode is often very good, it was defeated here by a combination of their yellow led lighting and my general inattentiveness. Having looked at these ugly pictures anyway, please scroll down to find out what we thought of the service, how much all of this cost and what I made of it on the whole. 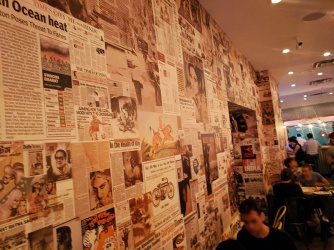 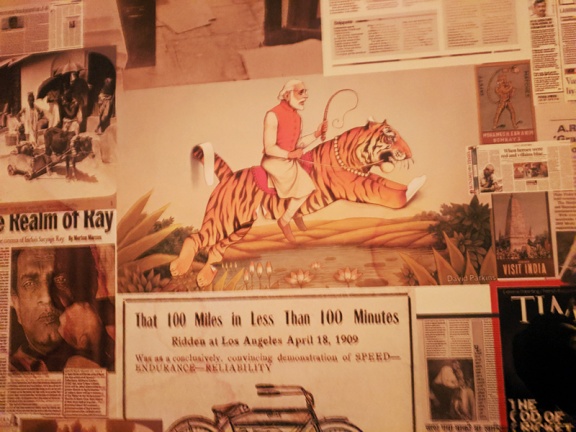 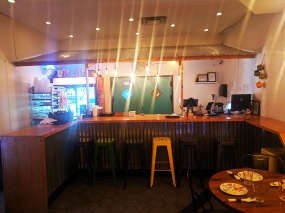 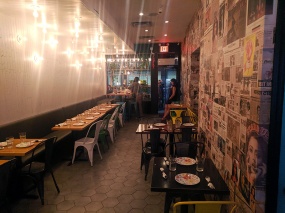 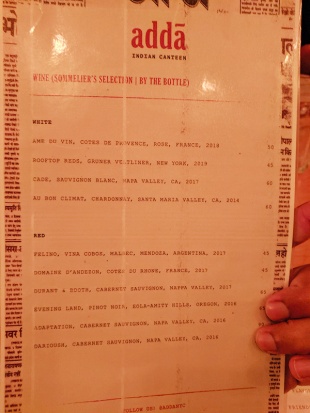 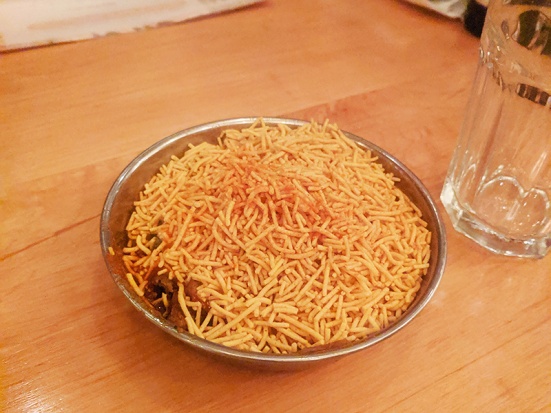 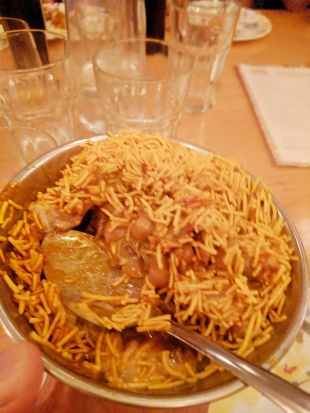 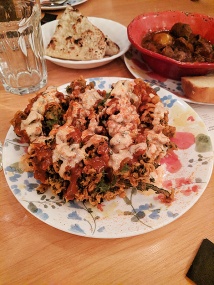 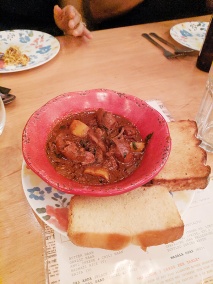 I prefer my liver fry to be much drier.

Not sure which of the starters this came with. 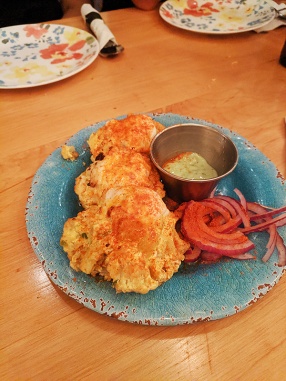 A bit of a disaster. 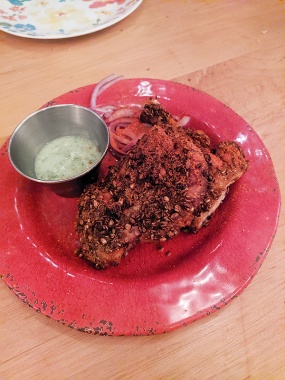 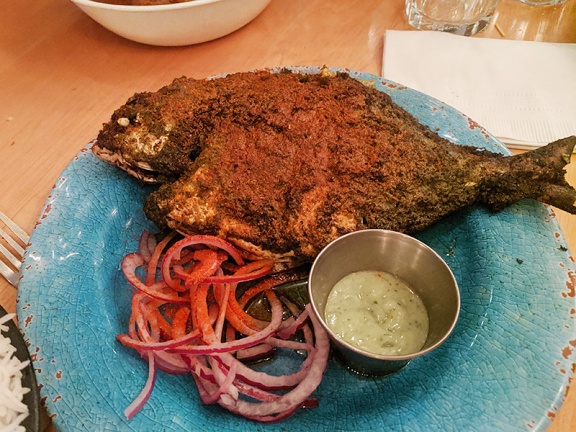 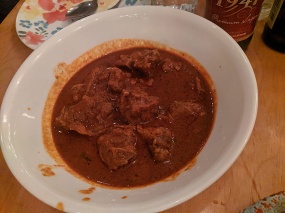 Not sure why it’s called “Junglee” (wild). 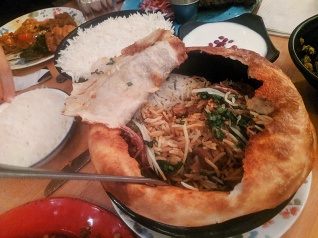 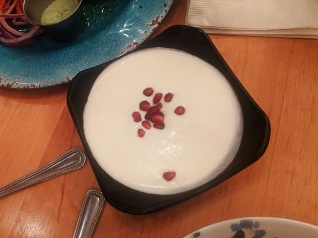 The raita was nice. 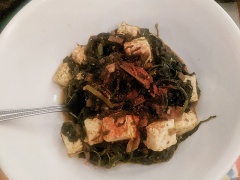 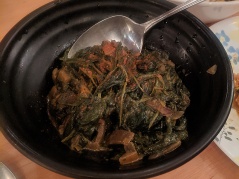 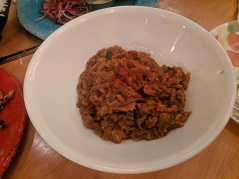 So, service and the overall vibe. Did I mention the place was loud? It was loud and very packed at 8 pm on a Tuesday. Service was friendly, intermittently clueless, and a bit harried (one appetizer didn’t arrive until we asked about it; at that point mains were already on the table). We were surprised when they informed us not too long after 9 pm that it was last call for the kitchen. And the place was empty by the time we left, not too long after 10. So much for the city that never sleeps.

Cost: just about $531 with tax and tip. A lot ($67/head) but we were 8 people and drank 7 beers ($6 each) and 7 glasses ($9 each) of wine between us. So it would have been about $400 for just the food, tax and tip or about $50/head. Not cheap either way but not bad for New York—and quite a bit less than I paid a couple of days later with a different group at one of the mod Indian places in Manhattan.

Worth it on the whole? Probably. There is nothing particularly revelatory about any of the food but most of it is done well, even if most of it is over-spiced. I think it’s good to have a place like this in the larger scene but, as an above-average home cook, I’m having a tough time deciding what other than the pompano I’d want to come back and eat again if I lived in New York (having said that, I probably will bring the missus on our next trip to NYC). However, if your only frame of reference for Indian food of this kind in the US is either the old generic curry house or the new mod’ish “small plates” place whose calling card is unnecessary twists on regulation fare (see my next Indian report from NYC) then you should definitely eat your way through Adda’s menu.

Up next from New York: dim sum! But before that, my last report from DC and another report from the Twin Cities.