Here is a variation on a dish I make on the regular but which I have not gotten around to posting a recipe of yet. Why do I say “a variation on a dish I make on the regular”? Well, because that’s what home cooking is, or at least what it is to me. I rarely measure ingredients, add more or less (or none) of some things on different occasions, and generally improvize each dish each time I make it. In that sense the recipes I post on the blog are lies or at least not accurate representations of how I actually cook. Recipes suggest exactness but I’m not a very exact person. A recipe I think should be treated as a general roadmap: you don’t want to deviate so far from it that you end up somewhere completely different but you don’t need to have it dictate every stop along the way either.  At least you don’t want it to dictate one fixed route for every destination.

This roadmap analogy is a bit shaky and so I will now abandon it and say only that the best recipes are those that allow reasonably confident cooks to create their own versions of them; it’s by doing that that one becomes a confident cook. And when you’re dealing with “traditional food” it’s important to remember that there is rarely a single recipe, a single way to make something. What you may have is a more or less general flavour profile for a dish, a more or less general texture or consistency, certain ingredients that are or are not used, certain techniques, but no two home kitchens will make things in exactly the same way. Home cooking is not restaurant cooking and should not aspire to that kind of reproducibility or to the stupid tech-bro framing of “The Perfect X” that is its tedious logical endpoint. That’s my view anyway.

What it means in this case is that this is a recipe that seeks to indicate a family resemblance rather than an exact snapshot. If you make it exactly like this it will come out well; but if you change a few ingredients or their ratios, well, you might be doing what I’ll do the next time I make it. On the other hand, if you change things and don’t like the result, well, then you shouldn’t have fucked with it, should you? 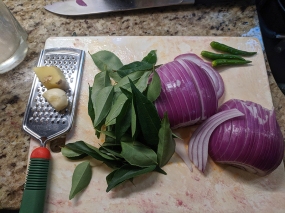 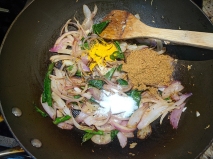 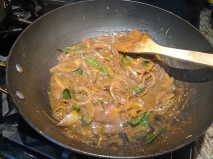