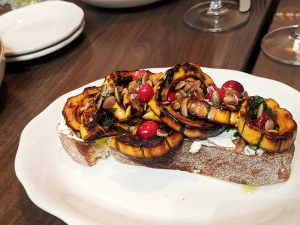 We first ate at Hyacinth in March. That was a nice dinner but nothing so very special; and on our drive south all four of us agreed that if we lived in St. Paul we’d eat there every once in a while but that it wasn’t anything we needed to drive an hour each way and pay a sitter a lot of money for. Nonetheless, I had wanted to go back in the summer or early fall to see what their kitchen would do with the best of Minnesota produce but, alas, it wasn’t to be. But I did get a chance to go back earlier this month with friends from work (the missus wasn’t along). As it happens, I liked this meal more than our first. Here are the details.

We had a reservation for a table for 5 at 7.30 on a Wednesday. However, as we were running early I called the restaurant to see if they could move us up to 7 and they were happy to do so. Our table was all the way in the back. This was an improvement on our door-side seating in March—as you may recall, we got a blast of cold air every time that door was opened on that occasion. Perhaps because we were all the way in, and by the counter, the restaurant also seemed much brighter than it had in March—or have they turned the lights up a bit? Well, sound levels are not turned down—it’s still a very loud restaurant—and it was a full house that night. Some have complained about the volume of the music there but I can’t say I noticed it over the sounds of the people. Still, we managed to make conversation easily enough.

To the food. As this was not our regular dining out crew we did individual orders of starters and mains; though we did get desserts to share. And as it happened we picked off each others’ plates anyway.

None of the descriptions of the secondi really did anything for us and so we all opted for full size portions of the pastas.

They had three desserts on the night and we thought it would be rude to not get one of each.

Launch the slideshow for a look at the space and the food. Scroll down to see what we drank and for notes on service and cost.

Taken as we were leaving. 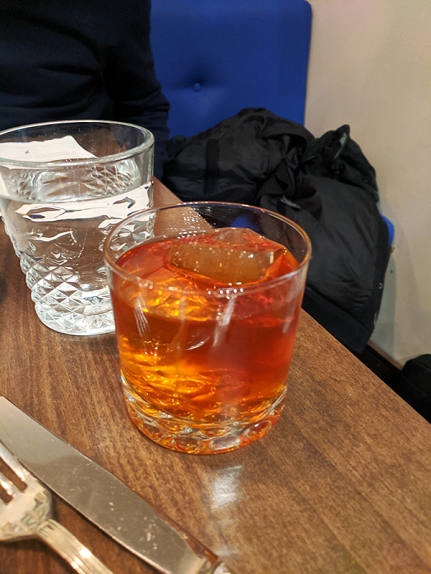 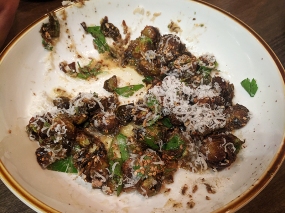 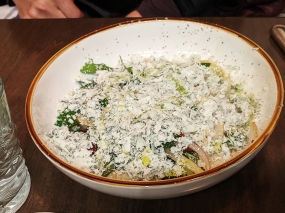 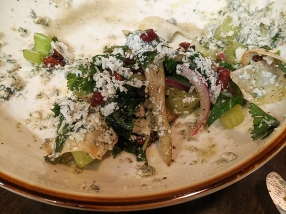 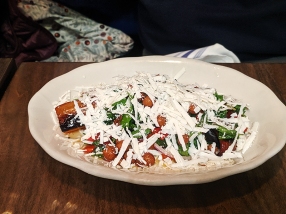 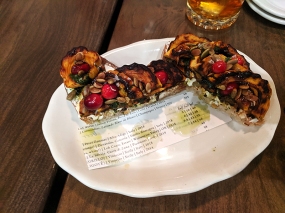 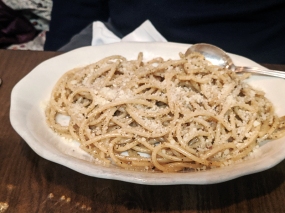 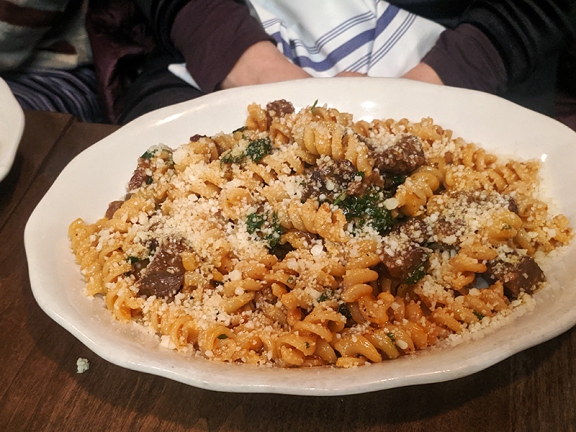 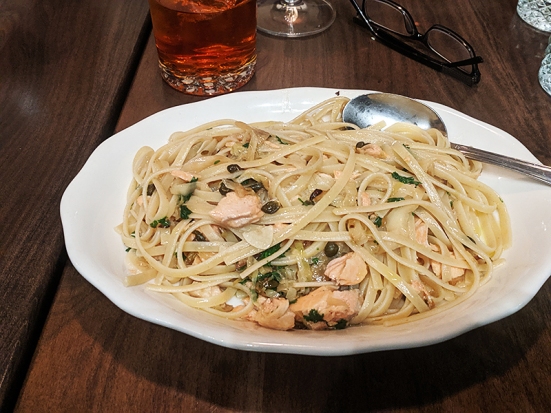 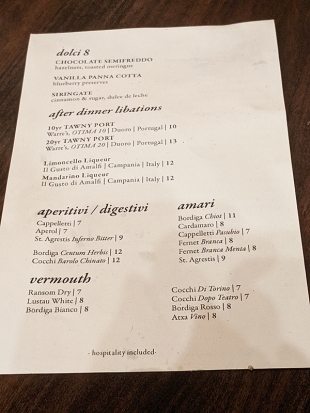 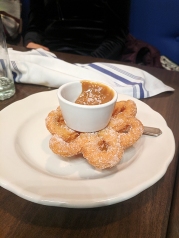 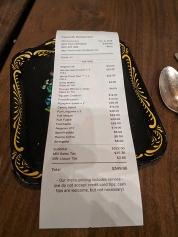 Between the five of us we drank six glasses of wine, two cocktails and a couple of non-alcoholic beverages. The cocktails were mine: I had the two Negroni variations they do—with London and Piedmontese gins—and liked them both. If I had to pick I’d go for the Piedmontese gin version (#11). Of the wine there were two rounds of a chianti-sangiovese blend and the second, unfortunately, came from a corked bottle. They replaced the glasses without any fuss. Service was better than last time. Again, perhaps because we were all the way in, right by the servers’ station, we were constantly checked on and had no trouble getting anyone’s attention when we needed it.

All of this came to almost exactly $350 with tax and included gratuity, or just about $70/head—very close to the per head cost in March. Was this a good value? Well, as you can see above, I thought that the first course was quite a bit superior than the second. This may partly be a function of getting the pastas as full main courses rather than as smaller mid-courses. The pastas were mostly fine but all a bit too much, and none very interesting, at the full portion size. Still, you’d think a place with a claim on being among the best Italian restaurants in the city would hit all the pastas out of the park. I’d take the pasta courses at Tenant over any of these any day. Nonetheless, I’d say this is good value in the Twin Cities these days—compare with our dinner at Joan’s in the Park, which cost $35 more per head and which I’d say was a fair bit inferior.

On the whole, however, this meal did not alter my sense of Hyacinth as a superior neighbourhood restaurant but not one worth taking a lot of trouble to get to. This is not a diss: I think that is exactly how they see themselves. And again, if we lived much closer I could see us popping in for dinner more than once or twice a year.

This meal did make me think that maybe we should give Bar La Grassa another try—maybe take some friends with us this time. Our dinner there was fine but the portions were oppressively large. Perhaps some time in 2020. Coming up next from the Twin Cities will be either a report on another return—this time to Homi—or on our recent dinner at Lat 14 in Golden Valley.

Happy Turkey Day to those who partake.