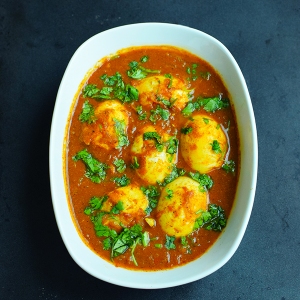 Another month, another anda/egg curry recipe. This actually has very similar ingredients as last month’s anda curry but with a bit of crucial +/- turns out very differently in terms of both flavour and texture. This is less aggressively spiced both because there’s no mellowing coconut milk being added in this version and because it was made with my children in mind. I’m happy to report they loved it and asked that I make it again. For my kids at least this has to do not just with the less aggressive spicing but also with the fact that the sauce is pureed and so there’s no onion or other crunchy bits floating around in it. It feels like my life’s work right now is to convince them that onions are actually why they like almost everything they like to eat. (You may not need to be so convinced but you’ll like this pureed sauce  too.) They are also not yet able to resolve their relationship with dhaniya. They like the flavour of dishes that are garnished with it but perform intricate surgery to get every bit of green off their plates before they eat. Fascinating, I know.