Indian Chinese food, as I’ve said before, is arguably the country’s true national cuisine. (I am speaking here not of the more recent, putatively more “authentic” Chinese food that has made inroads into the higher end of the market in major metros but which has a more limited reach.) This is true in two senses. It is available all over the country—in large cities and small towns, from fancy restaurants to street stalls to dhabas in the middle of nowhere—and has been for many decades. And it is a cuisine that at this point has been adopted without much/any rancour in every part of the country it has gone to (which is to say, again, to every part of it). This latter cannot be said, for example, of North Indian restaurant food—which is also everywhere but whose popularity inspires grumbling in many places outside North India. The only other contender is South Indian food of the idli-dosa-vada-sambar kind (I refer to it generically because that’s largely how it’s presented and received outside the South)—but that has never quite shed its (broad) regional origins. Indian Chinese food, on the other hand, is now of everywhere and from nowhere. And in most places there are no Indian Chinese people actually associated with preparing or serving it.

The one city where this is still not true is Calcutta which remains the one place in the country with an appreciable Indian Chinese community and which was the place from where the cuisine radiated to other parts of the country in the middle of the last century, mutating as it went. For my parents, who came of age in Calcutta in the 1950s and 1960s, eating Chinese food was a mark of cosmopolitanism. At home they ate Bengali food—though fairly different iterations of it as my mother’s family is from West Bengal whereas my father’s family were partition-era refugees from then-East Bengal—but when they went out it was usually to eat Chinese food (and also occasionally Continental food). Through my visits to the city in my childhood and teenage years in the 1970s and 1980s it was always Chinese food that we went out to eat as a treat, though never in Tangra, the bastion of Calcutta’s Hakka Chinese population since the 1950s.

In those days Tangra had unsavoury associations for Hindu Bengalis. It was the site of tanneries—leather being one of the major occupations of the Chinese population of the city—and for fastidious upper caste Hindus this was an unfortunate juxtaposition. The solution, however, was simple: go get the food to go—or in the case of the rich, send your driver to go get it. These days, however—which is to say since the last couple of decades—Tangra is a very different place. The tanneries are now gone and the neighbourhood’s Chinese character has diminished. But while many of the older restaurants have also disappeared, those that remain—and those that have sprung up more recently—are often large and fancy compared to those of yore. And there are plenty to choose from.

Calcutta is a food-obsessed city and pretty much every person you ask will have strong opinions on where you should go to eat anything. This can be a bit of an issue if—like me—you no longer have anything but a nodding acquaintanceship with the city but have lots of relatives and friends who are born and bred Calcuttans. But when I asked around, online and off, for recommendations for current Tangra restaurants worth a look Golden Joy was the one whose name came up in everyone’s lists. And so that is where we went. We took with us my parents and one of my nephews (all in town from Delhi for a family wedding).

Modernity is present in the Golden Joy menu in the form of the occasional Thai dish and also dim sum selections but by and large that menu is the preserve of the traditional Indian Chinese all-stars. And it is from these that we ordered. When we went out as a family to eat Chinese food when my sister and I were children—in the small towns outside the air force stations we lived in from South Bengal to North Punjab, to restaurants with names like Golden Dragon or Nanking—we always got chicken corn soup, chilli chicken, ginger fish, mixed fried rice and Hakka noodles; and we got all those on this occasion too with my own kids in tow. I’m not myself a big fan of gobi manchurian but I discovered that my nephew had somehow made it to his mid-20s without ever eating it and so we got that too. Plus a few more dishes. It was a lot of food but my parents took the leftovers back to the home of the cousin they were staying with and the bride-to-be and her friends devoured it all over the next day and a half.

For a look at the restaurant and the food, launch the slideshow below. Scroll down to see how much it all cost etc. 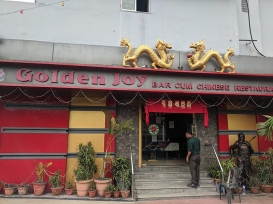 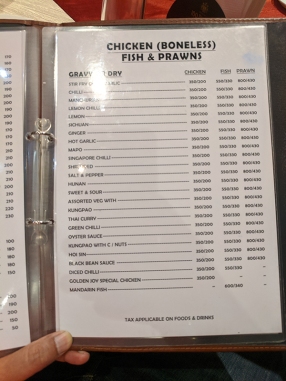 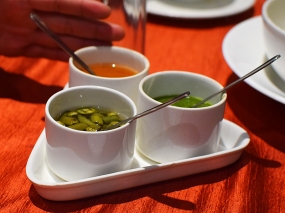 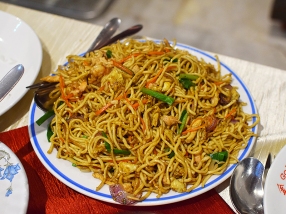 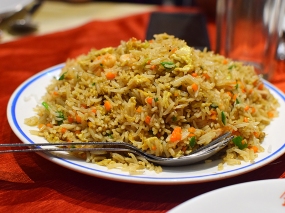 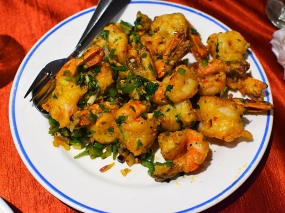 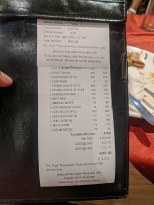 All of this came to about $60. It was enough food for 8-10 hungry people, so a very good deal even by Indian standards.

We arrived a bit on the early side for lunch on a weekday to find a nearly empty restaurant. I really didn’t need to make that reservation, I thought. But by the time we finished eating it was heaving with people—and it’s a very large restaurant. The food was all very good on its own terms. As I’ve also said before, my only allegiance to Indian Chinese food these days is a nostalgic rather than a gastronomic one but Golden Joy turns out a much better version of that food than a place like Big Wong in Delhi. And I suspect I would like the newer-fangled mod Chinese places far less—though if the pandemic ever ends and I get to go back to India again I should really put that prejudice to the test. I don’t know when I will go back to Cal again but I wouldn’t mind returning to Golden Joy when I do. That is, of course, if they make it through the downturn of the pandemic as well.

I should say as well that while Chinese food has been thoroughly indigenized, the status of Chinese people as visible racial others is another matter entirely. Many Indian Chinese were interned in camps during the war with China in the early 1960s and the recent border conflict with China has seen a resurgence of nationalist anti-Chinese sentiment—though good luck getting people to give up on their chowmein. And, of course, the coronavirus had already led to an upsurge of violent anti-Chinese sentiment—which extended to people from the Northeastern states as well. It’s not just in America that the adoption of a cuisine provides no guarantees for the minority populations whose food it is. I may as well end on that bummer of a note.

Note: this post was originally accidentally published from a draft that did not contain the penultimate paragraph on anti-Chinese sentiment.