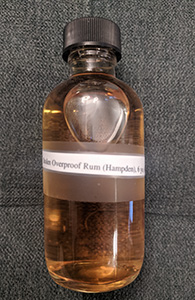 Despite our greater proximity to the Caribbean, the US gets far less interesting rums from the region than does Europe. The rum revolution (well, sort of) that took portions of the single malt enthusiast market by storm in the last half decade was centered almost entirely on releases from European bottlers. Well, here finally is one that was released exclusively in the US. It’s got one of those silly names that makes you think Diageo might be involved but the word on the street is that this is a 6 yo Hampden. The bottles are 375 ml and still available and very reasonably priced (<$25/bottle in many markets). That means there’s a good chance this will be the best value of any booze I’ve reviewed this year: I’ve not had many Hampdens but all the ones I’ve had have been great. Hampden rum, with its dunder-fueled, high ester spirit, had also until recently been the funkiest spirit I’d willingly put in my mouth but that crown has since been passed to the two marcs I tried in the last month and a half (especially this Jacoulot). Will this seem tame now?

Stolen Overproof Rum (61.5%; Hampden; from a sample from a friend)

Nose: Aniseed, bananas, bananas, bananas (over-ripe, thrown on a garbage heap and doused with diesel). After it sits for a minute or two there are sweeter notes of molasses, banana bread, raisins and orange peel; the rotting notes recede. Keeps softening as it goes with more orange peel and some toffee to join it. Softer still with a big squirt of water but after a bit there’s also a bit more acid and more of the aniseed.

Palate: Aniseed here too along with a lot of white pepper and spicier oak notes (cinnamon, clove). It has a big bite (as expected) but is approachable nonetheless. On the second sip there’s more of the expected Hampden funk but not a whole lot of it. More vegetal and herbal (dill, sage) as it sits. Water makes it much more peppery and tingly and pulls out more of the diesel.

Finish: Long. There’s some char here, some smoke. The gasoline emerges late and it gets more herbal here as well. As on the palate with water.

Comments: After Wednesday’s marc this noses positively refined! If this is indeed a Hampden it’s not as funky as the few others I’ve tried. It is very good indeed though: young rum is so much more complex than young whisky. Hmmm I think I might have to track down a bottle or two.