Our trip to Kansas City, in case I haven’t mentioned it before and in case it hasn’t already become obvious, revolved largely around the eating of barbecue. Gluttons for smoked meat though we are, we knew we needed to punctuate these barbecue blowouts with at least a couple of other kinds of meals or risk the very real possibility of untimely death. And so in doing my internet research I looked for interesting sounding restaurants that were some distance from barbecue. One of the names that came up a few times was a place with the unlikely sounding name of Waldo Thai. I put it on the long list but when a friend of a friend recommended it on Twitter I looked closer at its menu and we decided to give it a go. And a very good thing too that we did so. Not only was this a nice changeup from barbecue (our two previous meals had been at Arthur Bryant’s and Joe’s Kansas City), it was an excellent Thai meal, one of the best we’ve had in the US outside Los Angeles. Herewith the details.

Waldo Thai’s unlikely name it turns out is due to its location in a neighbourhood named Waldo. I can tell you I was very disappointed when I found this out. It is apparently the successor restaurant to a previous Thai restaurant located elsewhere in the metro. I’m not sure what the focus of that restaurant was but Waldo Thai’s specialty is Northern Thai food. They have an extensive menu, a goodly portion of which is given over to Northern Thai specialties. Their non-Northern dishes also are not limited to the usual American Thai restaurant suspects. There was a lot on the menu we wanted to try but given we were unlikely to come back any time soon we decided to stick with the Northern Thai or Lanna section.

The restaurant, by the way, is not your standard-issue Thai restaurant in other ways as well. It is aimed not at the affordable end of the market, as most Thai restaurants in the US seem to be, but squarely at people willing to spend money at trendy shared plates restaurants (another one of which we went to the following evening). It is a very attractive restaurant with nice design touches; they have a serious cocktail program; and the food is very much chef-driven. I don’t know how unusual it is for Waldo or greater Kansas City to have a Thai restaurant of this nature but it impressed us coming from the Twin Cities metro. Here the only East Asian restaurants with similar aesthetics, ambitions and prices are pan-Asian or fusiony in nature (your Lat 14s and your Hai Hais). That Kansas City supports a Thai restaurant such as Waldo is impressive (and I should note that they were doing pretty good business at dinner on a Tuesday evening).

What did we eat? I know I said that our non-barbecue meals were supposed to be a break from gluttony but the truth is we ordered rather a lot.

From the “Shareable” section of the menu we ordered a number of things the boys were guaranteed to eat:

From the Lanna/Northern Thai section we got three dishes:

To drink, a cocktail each for us. Some of their bespoke cocktails have unfortunate names (the missus refused to drink something called “Concubine” even though it sounded good and I similarly looked askance at the Kungfu Panda). Instead I ended up with I’m Not Sweet (they must have known I was coming), a makrut lime leaf-infused riff on a martini; and the missus got a Mekong River, pandan and cucumber-infused vodka with ginger, galangal, lime and soda. Both were very good, very refreshing and very complementary to the flavours of the food.

For a look at the restaurant and the food and drink launch the slideshow below. Scroll down for thoughts on service and price and to see what’s coming next. 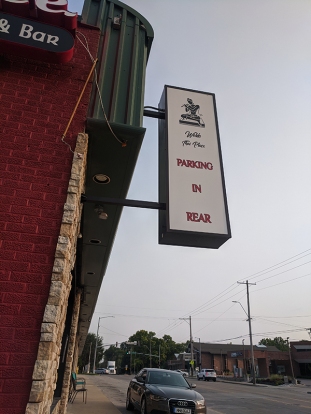 There is a lot of signage in the front but entry is actually through the patio in the rear. There’s a large parking lot back there too, even if far too many of the spaces are reserved for customers of the adjacent Jimmy Johns. 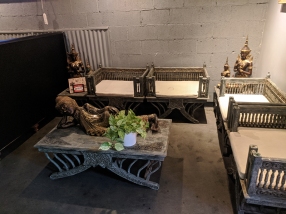 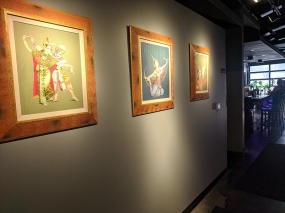 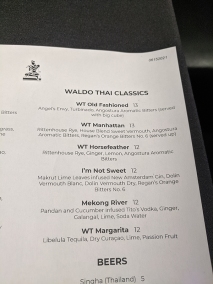 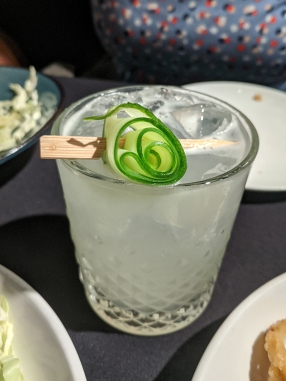 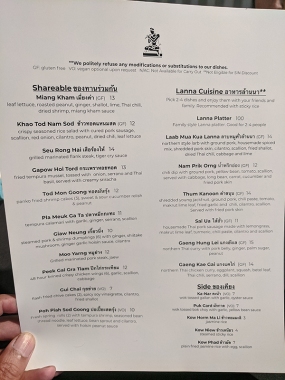 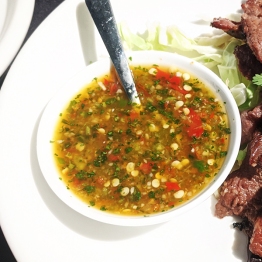 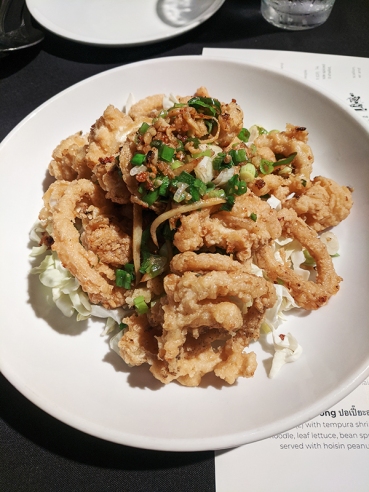 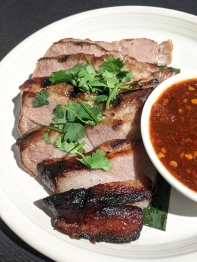 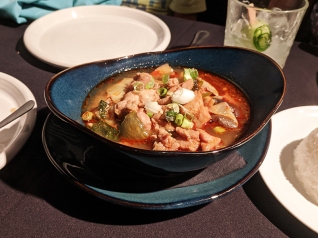 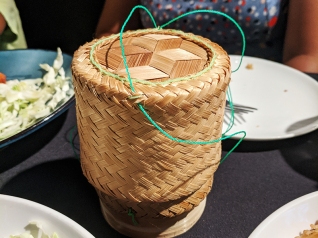 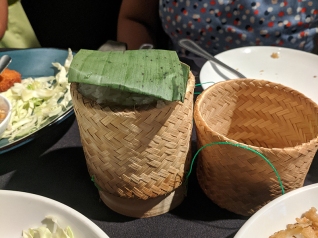 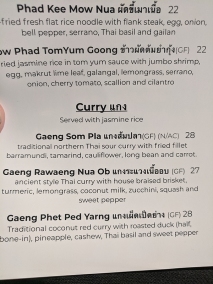 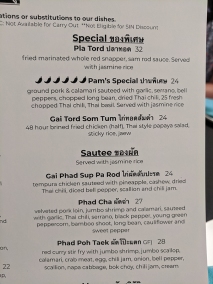 Service was very adept, very polished. We had a pleasant conversation with our server, originally from Mexico, discussing the larger immigrant cuisine scene in Kansas City. He was not enthusiastic about the Mexican food available, in case you’re wondering, but was bullish on the whole.

Price? With tax and tip it came to $157. We took a lot of leftovers back to the AirBnB (and later back to Minnesota in our cooler); it was enough food for at least five adults. So about $32/head. Throw in a few more drinks and you might get to $40/head for five adults. That’s pretty good value for the quality of the food and the unusual nature of the regional proffer. If we lived in Kansas City we’d eat here often, and not just because we were told the menu turns over seasonally. If you live there and haven’t been—or if you might visit too—you should really go.

Okay, the next Kansas City report will also be smoked meat-centered. That will be on the weekend. I’ll get back to Twin Cities reviews next Tuesday (probably).