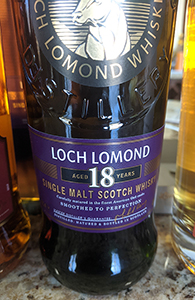 Back in April I reviewed a trio of recent official Loch Lomond releases: the Loch Lomond 12 (newly dubbed “Perfectly Balanced”); the Inchmoan 12 (“Smoke & Spice”); and the Inchmurrin 12 (“Fruity & Sweet”). Those bottles were actually purchased with two other Loch Lomonds, one official release and one independently bottled. This 18 yo is the other official release. It’s not the new Loch Lomond 18 though. That one also comes with an accompanying epithet now (I’m not sure what it is—maybe “Historically Dubious“?). It was/is my first time trying the Loch Lomond 18 though and I was interested to see what I would make of it compared to its younger siblings, all of which I had quite liked (especially for the price). Here now to kick of another week of Loch Lomonds are my notes—I’ll have the review of the fifth from this quintet, an Inchfad 15 (bottled by Cooper’s Choice) on Wednesday; and I’ll close the week with another Inchmurrin (bottled by the SMWS).

Nose: A more restrained version of the 12 yo, it seems like. There’s fruit—but not a large amount of it and not particularly musky/tropical—and toasted oak and then a bit of sooty smoke; none of the funkier, mineral/gingery notes in the younger stablemates. As it sits there’s more citrus (lime). A few drops of water soften things up and pull out a bit of cream and shift the citrus from lime to lemon.

Palate: Comes in a little thin in terms of texture and also flavour: there’s a papery, almost cardboardy note. As on the nose, the fruit makes more of an impression after a few minutes—here too it’s mostly citrus along with some muskier accents (very faint passionfruit, some pineapple). With more time still the muskier fruit expands and there’s more oak to go with it (not tannic, not obtrusive). Okay, let’s add water. Yes, lemon here too and cream.

Finish: Medium. Oak, spice and a bit of smoke (more wood than soot here). As on the palate, the fruit expands here too with time. The fruit is muskier here with water; the oak returns at the end.

Comments; If the new Loch Lomond 12 was a more restrained version of the new Inchmurrin 12,  this older Loch Lomond 18 is a more restrained version still of the new Loch Lomond 12. An argument could be made that this is the superior whisky on account of better balance and the absence of any real flaws. However, I find it difficult to pick between them as I like the more exuberant fruit of the 12 yo more than any single element here. Well, I suppose if a new label and name is not the only difference the new 18 yo may have more fruit as well. Perhaps I’ll check that out too at some point.