And so I finally come to the end of my meal reports from our trip to Madison in August. I know it will be hard for you all to face the coming weekends without the succour of these brief reviews but somehow you will have to manage.

As I’ve noted in my other reports, we experienced variable weather in our three days in Madison, ranging from the sunny and extremely hot to the extremely rainy. Somehow, this only impacted one of our meals (we ate breakfasts in our hotel room). We managed outdoor dinner on the first night (at Strings Ramen), outdoor lunch and dinner on the second day (at Bandung and Ian’s Pizza) and lunch on the third day (at Settle Down) but there was no hope of eating out on the third evening. The rain was torrential and it was unrelenting. As we were unwilling to eat in with an unvaccinated child in tow it had to be takeout then. How did it end up being sushi and what was it like? Read on.

Having eaten pizza the previous evening and burgers and related things for lunch that day we were not in the mood for more American food. My first call was to a highly recommended Lao restaurant, Lao Laan Xang—but as luck would have it they’d closed that day due to a kitchen malfunction. I then tried to order Vietnamese food from the also highly recommended Ha Long Bay, but despite calling non-stop for 45 minutes I was not able to get through (they do not have online ordering). And so we decided to go for the unlikely choice of picking up sushi to eat in our hotel room. As Red was the place recommended from all directions for sushi in Madison that was our port of call.

I placed the order online and after receiving a text notifying me of the imminent readiness of the order set off in the rain to pick it up (thankfully, the restaurant was close to our hotel). I arrived to find a large, splashy restaurant full of people dining inside. They do have attractive looking outdoor seating as well which must be nice when it isn’t pissing down. Our order was indeed ready and waiting and it was only a few minutes later that we were tucking into it in our room.

What did we get? The younger boy asked for tempura and rice and miso soup and that’s what he got. The missus got the chirashi (several pieces of sliced fish plus pickled and fresh veg over sushi rice). The older boy asked for two orders of shrimp nigiri and an order each of yellowtail and salmon and that is what he at with great gusto. I got the sushi dinner, which comprised 9 pieces of nigiri of the chef’s choosing (in case you’re thinking this is an uncharacteristically small amount of food for me to eat, you are right—I also polished off leftovers from Bandung).

Since we weren’t eating in we couldn’t verify the identities of every piece of fish in the chirashi and sushi dinner—though in the slide show below I’ve taken some educated guesses—based on the menu on the night—at the non-obvious fish in the latter.  Launch the slide show to take a look at the space and our dinner. Scroll down for thoughts on the experience on the whole, to see how much it cost and to see what’s coming next. 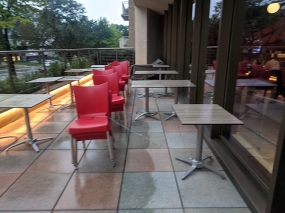 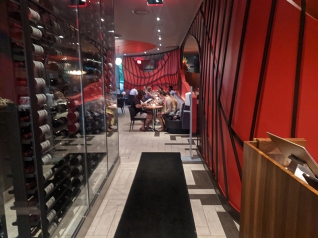 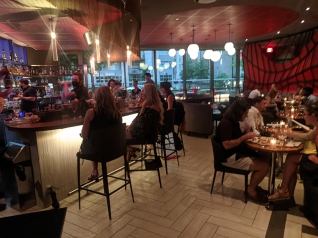 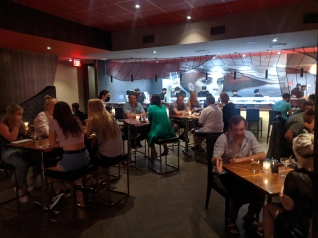 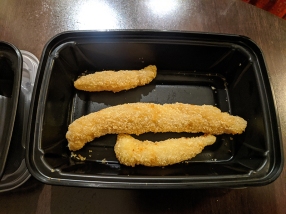 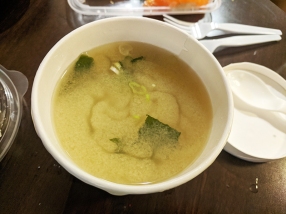 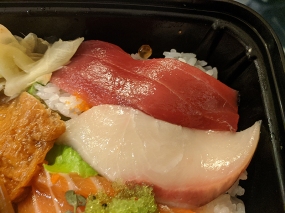 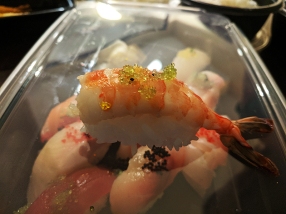 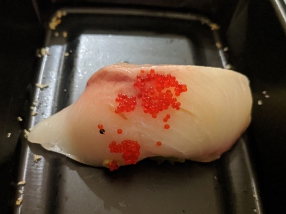 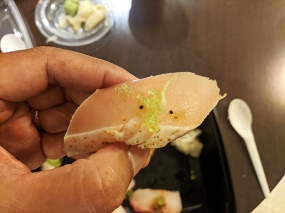 Of course, takeout eaten in a hotel room is not the optimal way to eat or judge sushi but given the less than ideal circumstances the quality seemed pretty good and better even in that state than anything we’ve eaten in the Twin Cities at places of similar ambitions and price. If we were to go back to Madison I’d be happy to try them again in person. Cost? $140, which is quite a bit to pay for sushi eaten in your room but is also less than we paid for sushi of lesser quality eaten in person at Saji Ya in St. Paul this month. So probably fine all things considering.

Okay, that’s Madison in the rear view mirror. The next two reviews from the Twin Cities will be of Mexican restaurants of very different types. In between there’ll be a look at a Mexican grocery store.

One thought on “Red (Madison, Wisconsin)”