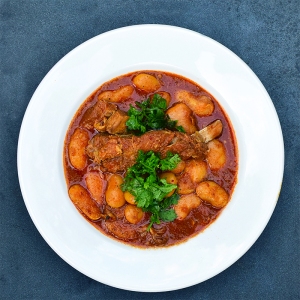 I am being told I should do a better job of self-promotion and so here it is. After many years of saying (truthfully) that I have no financial relationship with Rancho Gordo I have now developed a small one. I have written a digital booklet of bean recipes for Rancho Gordo that was “published” last week and announced to those who receive their occasional newsletters and follow Rancho Gordo’s founder/head honcho, Steve Sando on Twitter. And now I am telling you about it here as well. The booklet contains six bean recipes. It’s titled “Indian Bean Recipes: Traditional and Not-So Traditional”. Four of the six recipes have already appeared on the blog. The other two have not and probably will not and so you will have to download the booklet here to see them. The good news is the booklet is free for you to download and since I was paid upfront you will not be putting money in my pocket by downloading it.

As a result of Steve kindly putting a link to the blog in the newsletter announcing the booklet I also seem to have a fair number of new readers and so I thought would offer a brief overview of how the blog works.

This started out as a whisky blog (way back in early 2013) and I still regularly review whiskies (and other spirits). Those reviews are posted on Mondays, Wednesdays and Thursdays. On Tuesdays I post a restaurant review—unless I’ve been traveling these reviews are of restaurants in the greater Twin Cities metro (I live in southern Minnesota). On Thursdays I post a recipe. Any extra stuff—an additional recipe, a look at a market etc.—usually shows up on weekends. On the first of every month I post a look ahead to the month of booze reviews on the blog and either the same day or the next I post a poll to select the recipe posts for the month from my ever-growing backlog.

The full list of my posted recipes can be found by clicking on the Cooking tab above and you can also find all my restaurant reviews (from the Twin Cities and elsewhere) by hovering over the Restaurants tab. Whisky reviews can likewise be found by hovering over the Whisky tab. Most of the other stuff has not been updated in years so please don’t bother with them.

If you are here for the food stuff, you may also be interested in some of these posts:

Well, that’s about it. If you’re new, I hope you’ll stick around. And I’m always happy for comments—whether in agreement (the best kind) or in disagreement (“the only thing worse than being talked about…”). If you make a recipe and it doesn’t turn out well, or if you have questions about ingredients, please let me know. Feedback on and suggestions for restaurant reviews are also always welcome. And, of course, if you do have an interest in whisky (or other spirits) as well, do weigh in there too.