I thought I’d get the poll to select November’s recipes up a few days earlier than usual. The first Thursday of the month is coming up very soon and so it’ll be good to have to time to make whatever the first recipe turns out to be one more time before putting it up.

Several frosts have happened since the previous version of the poll and my vegetable garden is mostly dead (only a few cauliflower plants are still going). Many of these recipes were made with garden produce in September and October though. I’ve been putting eggplant in everything I’ve made since August, it feels like. All September’s recipes were eggplant-centered and here too it shows up in two pork dishes, along with another variation on alu-gobi made with garden cauliflower. Also on the list is a potato dish to which I added dried cranberries just to troll my friend Aparna (she was gratifyingly outraged) but which came out rather well that way. Rounding out the list are a couple of dishes that didn’t make the cut in the last few polls. Will this finally be the month for the mirchi sabzi (made originally with garden peppers) and the pork rib fry? Let’s see.

I will leave this poll up till Monday morning. You can vote for up to four recipes. The four highest vote-getters will be posted in November on Thursdays, though not necessarily in order of votes received.

Pictures of the finished dishes are below for reference. And here is the poll (which I will leave up till Monday): 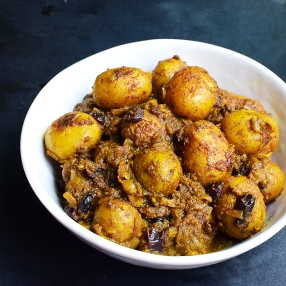 As always, if you’ve actually made any of the priors months’ recipes that you voted for (or even if you didn’t vote for them but made them anyway), do let me know how they turned out.