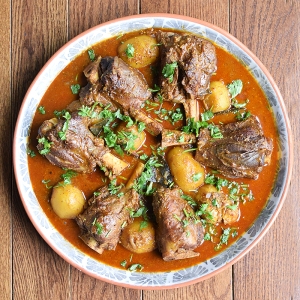 Yes, it’s time to help me select recipes to post next month (on Thursdays, as always). I have eight candidates this month and I’m afraid that as written none of them are vegetarian. Two, however, can be made vegetarian—one by omitting the small shrimp I threw in on a whim, the other by replacing smoked ham hock with smoked tofu or tempeh or similar. And I know it’s a long shot but I hope a bunch of you will vote for the gurda-kapoora masala even though it features goat testicles. The recipe will work even if you leave out the testicles (assuming you can find some to buy) and use only kidneys or a mix or kidneys and liver or kidneys and liver and keema. The rest I think should not be such hard sells. But who knows, maybe you’ll surprise me and the goat balls will be the runaway winner of the poll. END_OF_DOCUMENT_TOKEN_TO_BE_REPLACED 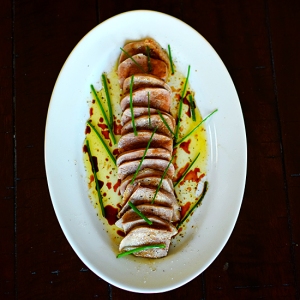 The recipes poll is back, baby! I didn’t post one for March, largely because I wanted to clear some of my backlog and partly because, headed to Delhi, I knew there’d be at least one recipe I’d post from the trip (that turned out to be this one). I now enter April with no backlog at all, no recipes already jotted down. Which is not to say that the recipes in the poll are things I’ve never cooked before. Well, one was learned in Delhi just over a week ago and my approach to another was overhauled then as well. The other four are things that I have made before but have not written down ingredients or steps for. I won’t be recreating them in April so much as riffing in the spirit/taste memory of the originals. Most of the pictures in the slideshow below are therefore indications rather than promises of what the new versions of these dishes will look and be like. END_OF_DOCUMENT_TOKEN_TO_BE_REPLACED 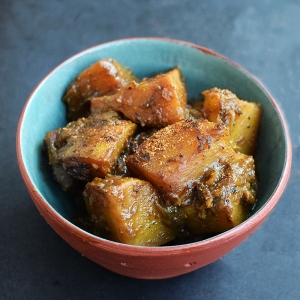 Here is the poll to select the recipes for the coming month, to be posted, as always, on Thursdays. January’s poll saw the recipe for baingan masala with keema finally making the cut. Will this finally be the month of the recipe for masala-fried spare ribs which has been getting rejected for even longer? Let’s see. After a nearly all-vegetarian run in November and December, January saw only one vegetarian recipe make the cut. This month’s poll features three vegetarian recipes and three non-vegetarian recipes. It also features two recipes that may not seem particularly Indian and one that centrally involves a non-Indian ingredient. As always, you can vote for up to four candidates and the top four vote-getters will be posted (though not necessarily in order of rank). END_OF_DOCUMENT_TOKEN_TO_BE_REPLACED 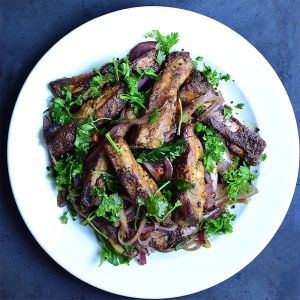 Thursday is recipe day on the blog. Though there are five Thursdays this December you will not be getting five recipes from me. We will begin the month with the recipe poll on the first Thursday.

The summer and my vegetable garden are now a faint memory—though it’s not actually gotten very cold here yet: on December 1 the maximum was a positively tropical 52f or so. Still, signs of the summer persist here with the presence of an eggplant and pork dish that I first made back in early October when my eggplant plants were enjoying their last hurrah. It didn’t make the cut in November but who knows, December may be its month. It’s joined on the poll by another past also-ran: a masala-crusted stir-fry of spare ribs that I rather like but which has failed to garner enough votes to make it out of last place in the last two polls. I have one more packet of spare ribs left in the freezer from the last pig we went in on and if this makes the cut this month I will quite enjoy frying them up again. The other four dishes are new to the poll, all of them vegetarian. END_OF_DOCUMENT_TOKEN_TO_BE_REPLACED 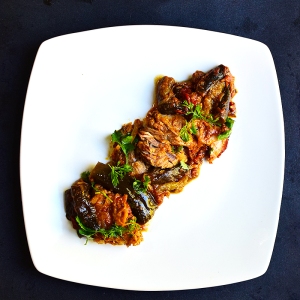 I thought I’d get the poll to select November’s recipes up a few days earlier than usual. The first Thursday of the month is coming up very soon and so it’ll be good to have to time to make whatever the first recipe turns out to be one more time before putting it up.

Several frosts have happened since the previous version of the poll and my vegetable garden is mostly dead (only a few cauliflower plants are still going). Many of these recipes were made with garden produce in September and October though. I’ve been putting eggplant in everything I’ve made since August, it feels like. All September’s recipes were eggplant-centered and here too it shows up in two pork dishes, along with another variation on alu-gobi made with garden cauliflower. Also on the list is a potato dish to which I added dried cranberries just to troll my friend Aparna (she was gratifyingly outraged) but which came out rather well that way. Rounding out the list are a couple of dishes that didn’t make the cut in the last few polls. Will this finally be the month for the mirchi sabzi (made originally with garden peppers) and the pork rib fry? Let’s see. END_OF_DOCUMENT_TOKEN_TO_BE_REPLACED 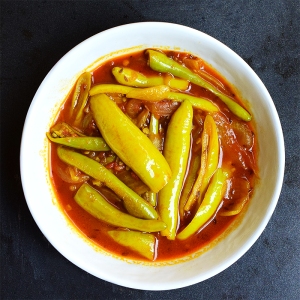 And here now is the poll to select the recipes for this month.

Unlike September, October will not be focused on a single main ingredient. My garden is still giving me eggplant, courtesy our warmer than usual September, but it’s now a manageable trickle rather than a flood. Two of the recipes on this list of candidates were very good too, as it happens, for using up a glut of other garden produce this summer and early fall, namely hot peppers and tomatoes. And though my cauliflower harvest was no more bountiful than it has been in the past (i.e not very bountiful) the cauliflower recipe is also inspired by my own crop of white, yellow and (so far, one) purple cauliflower. But it’s not all vegetables. If after 4 weeks of vegetarian recipes some of you are hoping for some meat, there are two chicken recipes (one curry with lots of tomatoes and one roast with zero tomatoes) and one with pork. Cast your votes for up to four of these recipes below. END_OF_DOCUMENT_TOKEN_TO_BE_REPLACED 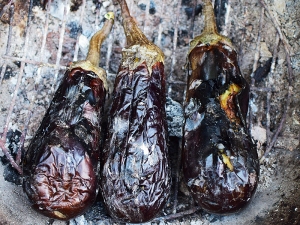 Yesterday’s look ahead to the coming month on the blog presented the usual long list of whisky reviews and invitation to nominate those you’d particularly like to see reviewed. Here now is the poll to select the four recipes for September. There are six recipes on the poll and you can vote for up to four of them. The top four vote getters will show up on the remaining four Thursdays of the month. In the past—when I did a version of this poll on Twitter and also the last couple of times on the blog—I’ve used the ranking to sequence the posts. But this month I might juggle that depending on the selection. And oh, there’s a twist this month: all the recipes feature eggplant/brinjal. We have been drowning in eggplant from my plot in a local community garden and as a result I’ve been cooking it in all kinds of ways of late. END_OF_DOCUMENT_TOKEN_TO_BE_REPLACED

As in July, the poll to select recipe posts for August will be conducted here on the blog instead of Twitter. The poll function on the blog allows for more choices and also allows multiple selections. This month’s poll includes three of the dishes that didn’t make the cut in July plus five new ones. (I replaced the crab curry in July’s poll with a crabmeat poriyal in this one.) You can vote for up to three dishes. The poll will be open till noon Minnesota time on Tuesday.The top four vote-getters will be posted in order on Thursdays this month, starting on Aug 5—the others will enter the poll for September. Photographs of the dishes are included to give you a better sense of what you are voting for. END_OF_DOCUMENT_TOKEN_TO_BE_REPLACED

For a while now I’ve been doing polls on Twitter at the start of each month to figure out the sequence of the month’s recipes. Twitter’s poll function is very limited, however, and so I’ve decided to do these polls on the blog going forward. If you are among those who are interested in my recipes please respond to this poll in the next 48 hours. You can vote for up to three options. The top four vote getters will be posted on the remaining Thursdays in July. The others will enter the pool for August’s poll. END_OF_DOCUMENT_TOKEN_TO_BE_REPLACED