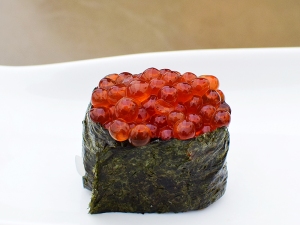 If dim sum is one of things we most look forward to eating in Los Angeles, so is sushi. My views on Minnesota sushi being just about as beloved as my views on Minnesota dim sum, I will say no more about that. I will instead only reiterate that it is very easy to find good sushi all over Los Angeles county—you don’t need to go to the temples of sushi in order to eat very good fish served atop very good rice. And if you’re in Torrance one of the best choices for that combination is Sushi Nozomi. I’ve previously reported on a meal eaten there six and a half years ago, a bit on the run on the way to the Long Beach Aquarium. We stopped in again on this trip—Torrance being much closer to our new base of operations in Seal Beach than to our previous in Koreatown—and this meal was even better. Herewith the details.

I should note first of all that Sushi Nozomi, like a lot of the other restaurants in the large strip mall it is situated in, still has excellent tented outdoor seating (with heaters if you want them). This arrangement is seemingly now rarer and rarer in the South Bay (and probably elsewhere in Los Angeles too). Yesterday, for example, I called place after place in Long Beach, Gardena and Torrance only to hear from them all that they have suspended outdoor service. With more and more diners obviously jazzed about eating indoors most restaurants cannot staff indoor and outdoor spaces and so have punted the latter. I am sorry to say, however, that unlike in L.A proper places in the South Bay do not seem to be asking patrons to show evidence of vaccination before entry—the mandate seems to not really be in effect down here. And so we were all the more glad that Sushi Nozomi still has outdoor seating. There were three tables set out and having arrived just as they opened we grabbed the one 4-top and got down to bidness.

What did we eat? A lot. I think I’ve mentioned before that our older boy has in recent years developed a taste for sushi. This is both a source of parental pride and a source of financial stress. Thankfully, his brother has recently decided he does not like sushi—I think there was an encounter with too much wasabi somewhere—and so it did not turn out to be a ruinous meal. The non-sushi eater got a chicken teriyaki plate. This came with salad and miso soup, both of which were very good. It was also a very large portion of chicken and rice and the older boy supplemented his sushi selections with some of it as well.

At the fishy end of things, this was our order: the missus got the “Sushi Lunch” combo—8 pieces of nigiri plus a choice of tuna or California roll (she chose tuna). The pieces were as follows: maguro/tuna, hamachi/yellowtail, sake/salmon, hirame/haibut, shiro maguro/albacore, ebi/shrimp, ika/squid, tamago/”omlette”. The boy ate the shrimp nigiri off her plate and then both joined me in eating sections of a few waves of a la carte orders. He ate three more pieces of shrimp, two pieces of hamachi and a piece of hirame. This latter was a first-time try for him and he quite liked it. Next time we’ll expand to some more white fish. He also wanted to try spicy tuna rolls and I was only to happy to shunt him in that direction (predictably we then ended up eating most of these).

And so the rest of the a la carte nigiri as eaten by the adults (mostly me except where noted):

If you’re counting you’ll have noted that I ate 13 pieces of nigiri. The cost of just these 13 pieces before tax and tip was $61.20. I hadn’t actually done the calculation ahead of time but this is right on par with the lunch “Sushi Omakase” combo at $60 which comes with 10 pieces of nigiri plus toro roll. Perhaps there were other fish not on the nigiri menu that were on that combo but considering mine included two pieces of uni and two of ikura I think I did pretty well. I’d guess the Omakase combo probably comes with multiple pieces of fatty tuna in addition to the toro roll, none of which I am very interested in.

So how was the sushi? It was all very good but I’ll single out the following for special praise: the uni, the hotate, the kanpachi and the ikura (a few globules of the roe were a tad deflated but it was still excellent on the whole and a great chaser for the uni). The only disappointments really were that they did not have any kohada/gizzard shad or iwashi/sardine that day as both are fish I really enjoy (I would have swapped the awabe/baby abalone out for one of them and got the other as my 14th piece). The missus likewise gave the thumbs up to her lunch combo and her unagi.

For pictures of the restaurant and what we ate, launch the slideshow below. Scroll down to see how much it all cost and to see what’s coming next. 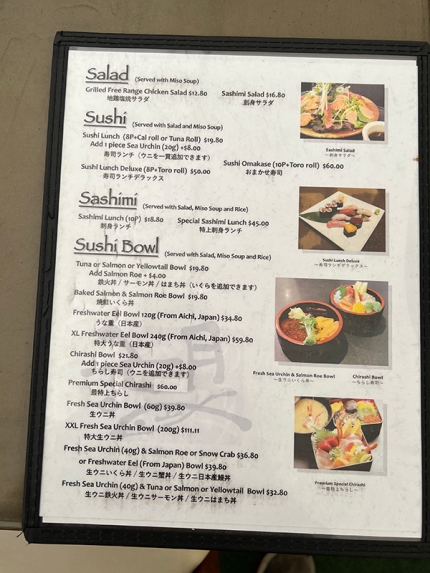 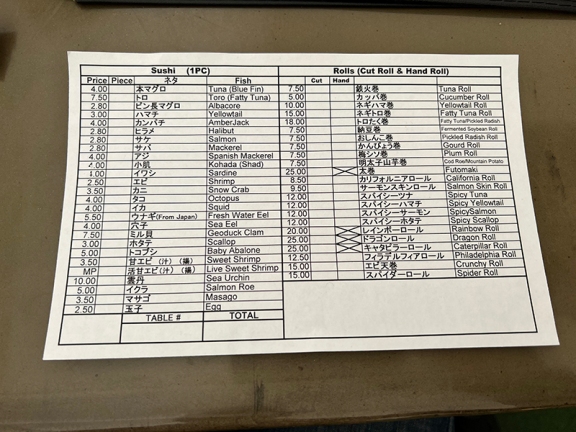 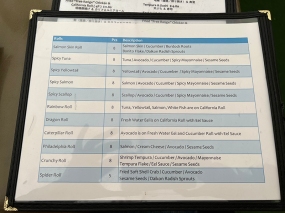 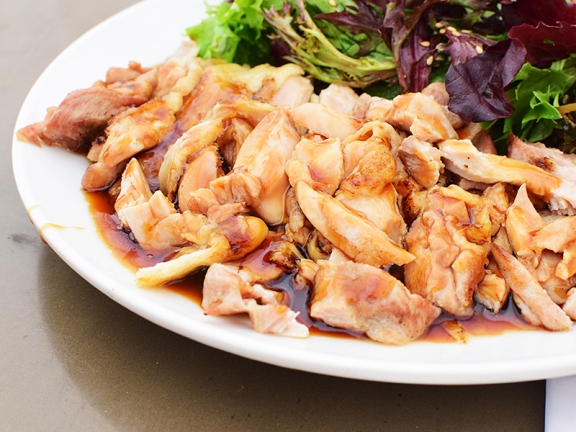 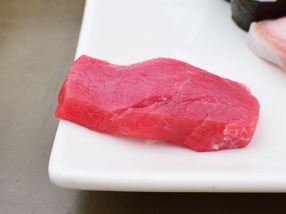 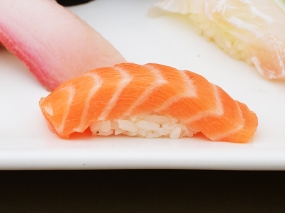 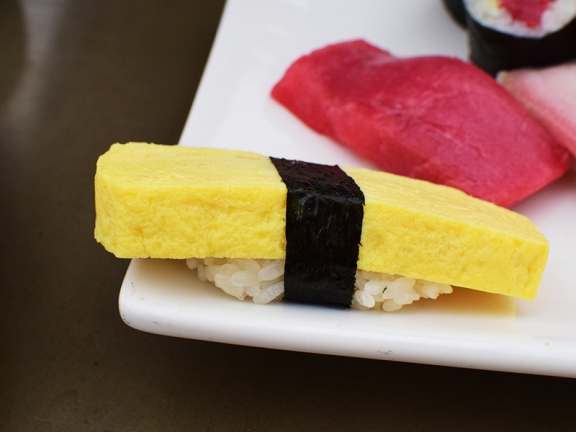 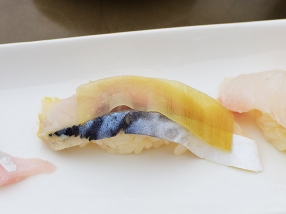 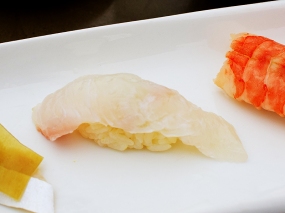 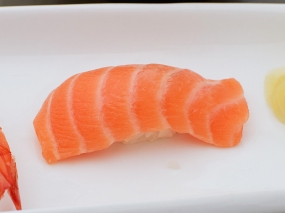 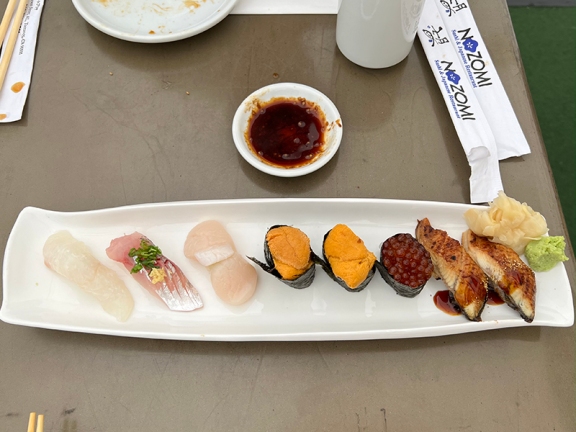 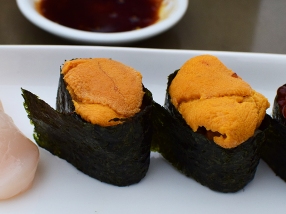 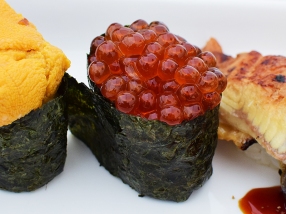 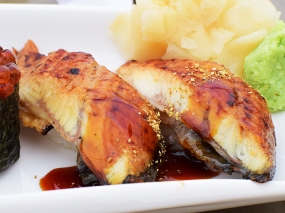 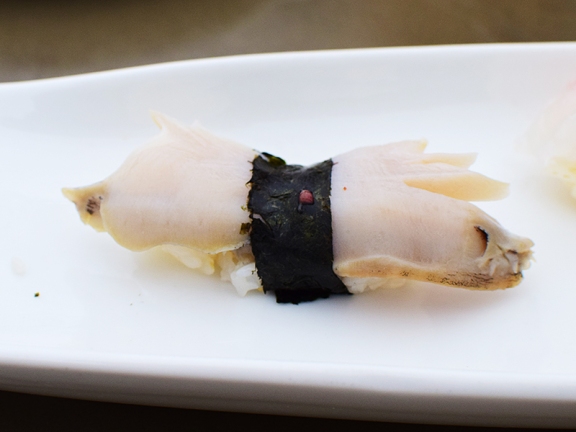 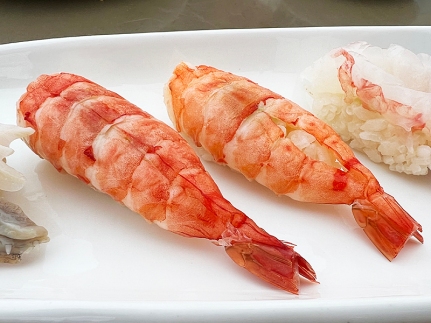 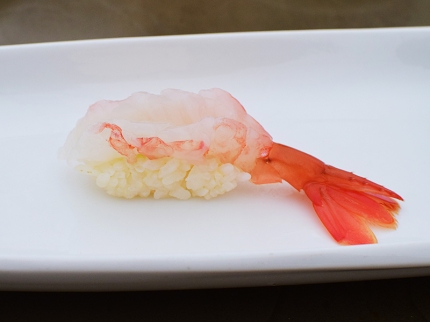 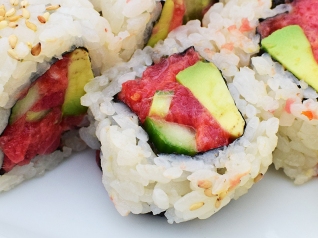 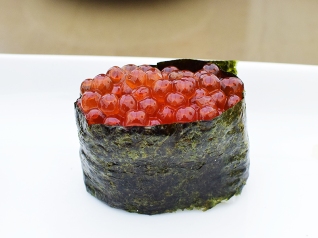 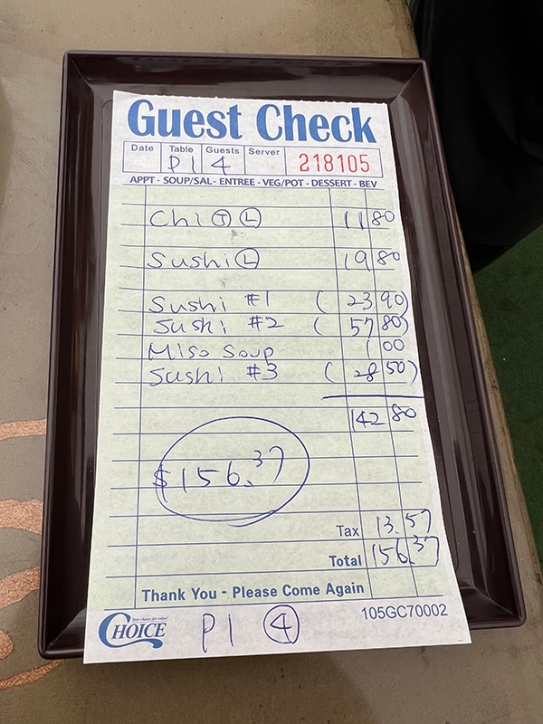 The total for all the a la carte sushi, the lunch sushi combo, the teriyaki chicken lunch and an additional bowl of miso soup came to just about $185 with tax and tip. All of the a la carte sushi—mine plus the pieces eaten by the missus and the boy minus the spicy tuna roll—was $98 before tax and tip. Which is really an excellent deal for the quality and quantity (22 pieces of nigiri in case you haven’t kept count). Oh yes, service was very friendly and capable. All in all, a very good meal on the way to the beach.

Our sushi eating will not end with this meal. We’re here till Thursday and tonight we’re scheduled to eat a more formal omakase at a much smaller place in Little Tokyo that is requiring proof of vaccination for entry. I should have that report in a few weeks. Next up from Los Angeles will be a Mexican seafood meal and then probably Indian or Korean.