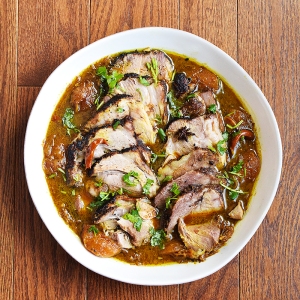 Thanks to our habit of purchasing pork a half-pig at a time from local small farms, we usually have several pork roasts in our chest freezer at any time. I sometimes cube these up and use them to make pork curries of one kind or the other (for example); sometimes I marinate them with spices and stick ’em in the slow cooker (for example). And sometimes I experiment with hybrid preparations of one kind or the other (for example). Today’s recipe falls in the last category. It involves the use of Indian spices but also apples and white wine—which to my mind seems like something I would associate with cooking from somewhere between France and Germany. And there’s also fish sauce and Sichuan peppercorn in there. All of this may make it seem like a fusion dish—and, depending on how you define fusion cooking, it may well be one—but to me the end result seems very much like a curry variant anyway. Indeed, when I improvised this in January we enjoyed it alongside dal and Indian veg dishes with rice/quinoa; but it was also very good just mopped up with bread. No matter how you locate it on a map, however, it is very tasty.

2 thoughts on “Braised Pork with White Wine, Apples and Spices”