Even by my very low standards this is a very low-utility restaurant report. I’ll tell you why in a bit. But first a bit about the restaurant. Spring Park, a western suburb of Minneapolis is located alongside Lake Minnetonka, and Vann—Norwegian for “water”—is located just across the street from the lake and boasts lovely views of it from its large windows. The chef is Erik Skaar whose path to Spring Creek included stops in Tampa Bay, Denver and Seattle before a return to the Twin Cities where he cooked at the Bachelor Farmer and Tilia before finally opening his own restaurant in late 2019. No, it wasn’t the most fortunate timing. But they made it through the first two years of the pandemic and have now seemingly hit their stride again. We finally made the trek out to Spring Park earlier this month to try their food, and we were very glad we did.

Here”s why this is a low-utility report. Vann’s menu structure has changed a number of times. It appears they started out with a regular a la carte menu, Then at some point last year they switched to a three-course menu for $75 with three choices for each course. This later became two choices per course. Then in May they switched to a fixed five-course menu (with no choices) for $95. This is what we ate in early June. And then—just as I began to belatedly put this report to together—they announced last week that they are going back this Wednesday to the three-course format with choices (presumably for $75 again). So if you want to eat a meal that resembles this one you’d better go out there tonight. But, based on our meal, it seems likely that no matter what format you encounter you’ll have a good meal.

You do have to like seafood though. Vann is Norwegian for “water” and their emphasis is on seafood (though not entirely at our meal). By the way, though there were a few Nordic touches at our meal (fermented spruce tips) this is not a Nordic restaurant. Indeed, Japanese cuisine seems to inform Chef Skaar’s minimalist approach even more. Japanese ingredients (preserved sakura leaf, hakurei turnip, mibuna) and preparations (namelaka) were present everywhere on the menu we ate. I’m not suggesting that this is a fusion restaurant; it’s just more evidence that these days Japan is a touchstone for American fine dining chefs as France once was.

This is what we ate:

The meal began with an amuse of gougeres smeared with Norwegian butter. The gougeres were airy and the butter was very nice but we did find this a slightly odd start to the meal that followed (and both thought that some nice crusty bread with that butter might have been more welcome). Indeed, the first course proper—which featured a porcini meringue, uni cream, caviar and the aforementioned preserved sakura leaf—worked much better as an amuse. At any rate, we liked it very much. We also very much liked the second course which featured barely poached prawns, blanched English peas and braised hakurei turnip. Not very many things on the plate, each cooked perfectly, forming a whole greater than the sum of its parts. Next up was a round of firefly squid in a vermouth beurre blanc with daikon and mibuna (a Japanese green in the larger mustard family). We really enjoyed this as well and came very close to asking the two women at the table alongside ours who just about poked at theirs with a fork if we could take their plates off their hands. We also rued the lack of bread to mop up that beurre blanc.

The most substantial course of the meal did not feature seafood: veal chateaubriand with fermented spruce tips, roasted porcini and pickled ramps. This was also very good. So, that’s four out of four courses so far that we really liked. Dessert we both thought was not quite at that level, though enjoyable in its own right. It featured a cherry mousse with white chocolate namelaka and cherry in various other forms as well.

Drinks? We began with a glass each of rosé. The missus stopped there and when I asked our server if he could recommend a second glass for me that might go well with the rest of the menu he kindly offered to pour me two half-glasses instead: first, a Slovenian white that I really liked (Pikasi Pilena) and then a Spanish red to close things out.

For a look at the restaurant and what we ate, launch the slideshow below. Scroll down for thoughts on service and cost and to see what’s coming next. 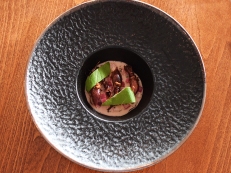 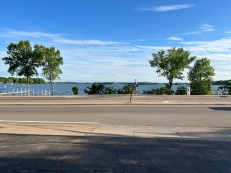 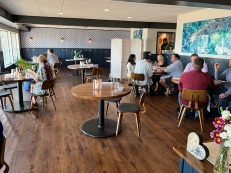 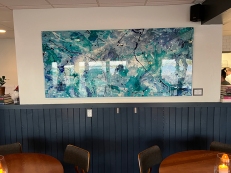 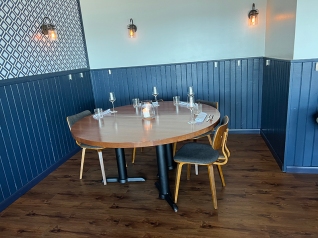 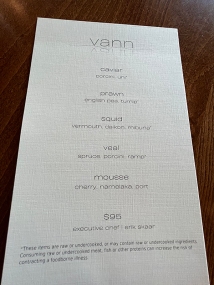 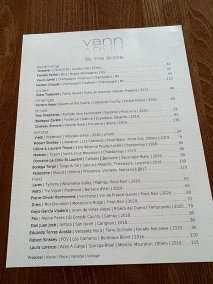 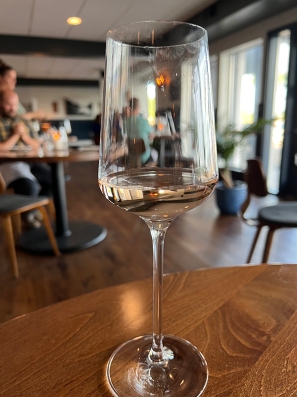 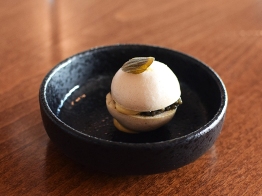 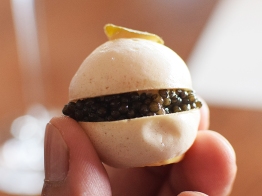 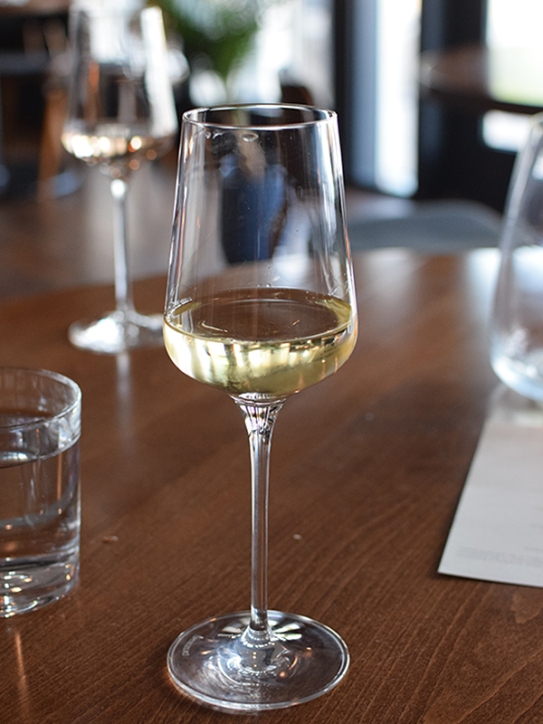 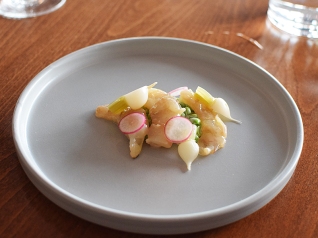 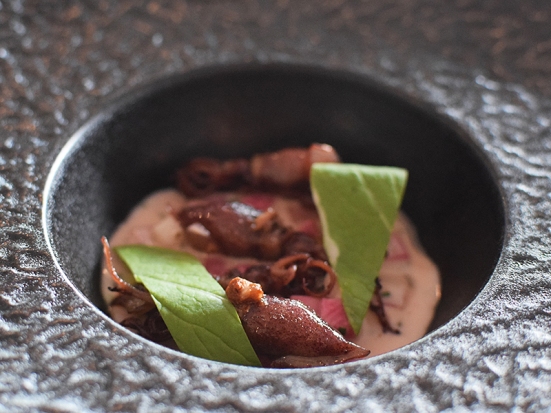 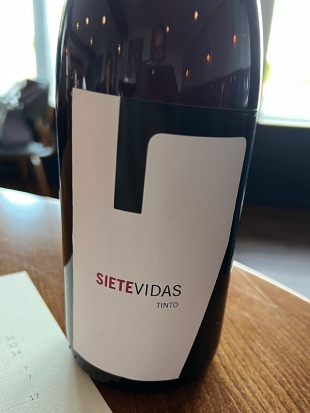 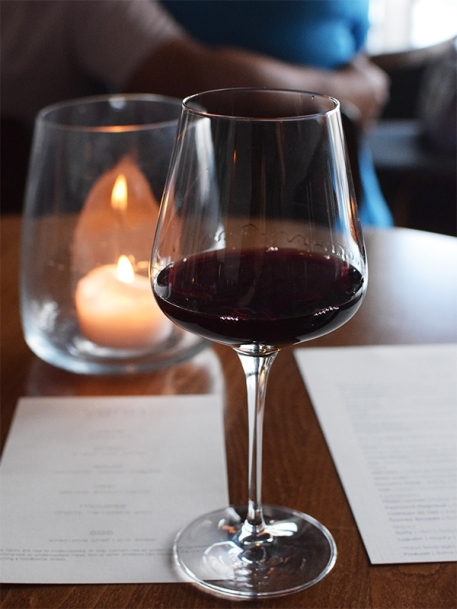 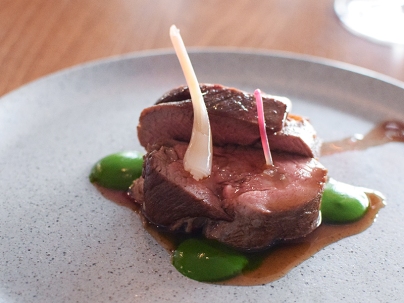 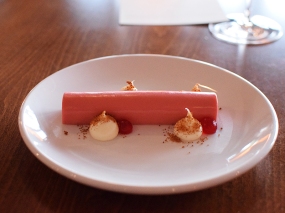 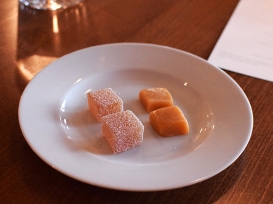 Service was very pleasant: present when needed and otherwise unobtrusive. Our server answered our questions when he could and checked with the chef when he couldn’t (which we appreciated greatly). Towards the end he popped out with an annotated menu with more details on it. There was a bit of a mixup with the wine. We’d ordered a sparkling rosé but had failed to notice that it had no bubbles in it (what can I say? My conversation is sparkling enough). But I did notice a much higher price than expected for the rosé on the check, which is when we realized our server had misheard and poured us a far more expensive rosé. We were happy to pay for what we drank but he insisted on charging us for the lower-priced wine we’d ordered.

The total cost with what was effectively three glasses of wine plus tax and tip was just about $293 or—getting out my calculator—$146.50/head. That’s pretty steep in the Twin Cities metro, even for a meal focused on seafood. Our meal at Spoon and Stable last fall was $106/head in comparison and even our dinner at Alma in the spring was cheaper at $140/head. I guess there’s a lot of money in the western suburbs—though I must note the restaurant was not close to full at any point on the Saturday evening we were there. I do hope that was an aberration. High price aside, we thought this was a very good meal and we look forward to hopefully eating there again towards the end of the summer.

Alright, what’s next? Probably casual Mexican from Minneapolis. That’ll be next week.