My meal reports from the Big Island, where we spent a week towards the end of June, have so far covered both a formal restaurant (Volcano House at Volcanoes National Park) and a more informal affair at Kona Grill House, where a formal kitchen prepares food to be eaten casually at outdoor tables. Today I have a review for you of a more informal setup yet, one that’s not very unusual on the Big Island and probably elsewhere in Hawaii as well. Randy’s Huli Chicken sets up their grilling apparatus by the side of the Mamaloa highway, a little south of Kona, and they grill their namesake chicken—and other things besides—till they run out. Your best bet if you don’t want to be disappointed is to go early. We’d passed them the day before we stopped while on the way to a beach further away and had made a mental note to pick up food for dinner in the evening. By the time we got back there—long before sunset— however, they were long gone. We made no such error the next day, stopping in for an early lunch after a visit to a coffee farm in the vicinity. I am happy to tell you that the food is very good.

Their main offering, of course, is huli huli chicken, so named because marinated whole chickens are turned ceaselessly as they cook over hot coals. Why Randy’s has only one “huli” in the name, I’m not sure. It’s a very informal set up. Big grills with chicken etc. on the go behind a large tent where you order and have the food served to you; you then either take the food to go or score a spot at one of the large tables under an awning at the far end of the parking lot where they set up. We decided to eat there so as to not have anything compromised on the drive and a very good decision it was too.

What did we get? Several of their plates:a roast chicken plate, a pork ribs plate, a brisket plate, and a roast pork plate (this latter is served doused in a brown gravy. Each plate comes with rice and sauteed corn. We also added a side of potato-mac salad. And we purchased a red bean paste pastry for dessert (very nice).

Everything was at least good. The brisket was probably the least of the four. The chicken, unsurprisingly, was the star. And portions are very large as well. We were three adults and two hungry boys and we took enough food home for dinner the next day.

For a look at the setup and the food, launch the slideshow below. Scroll down for a few more thoughts and to see what’s coming next on the food front. 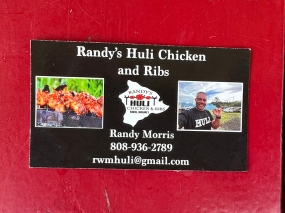 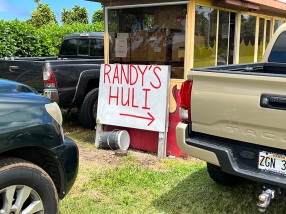 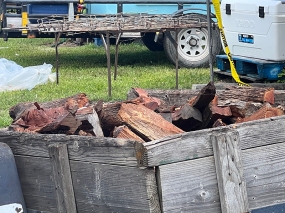 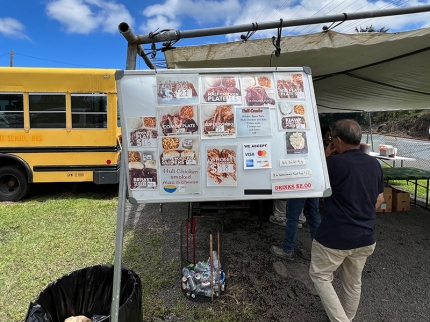 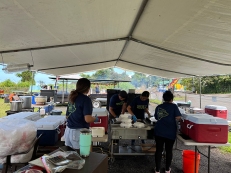 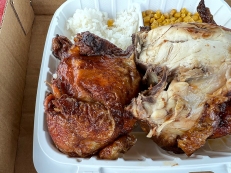 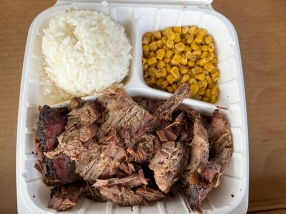 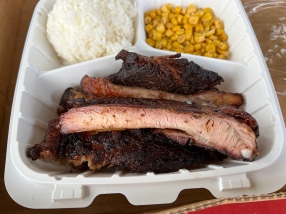 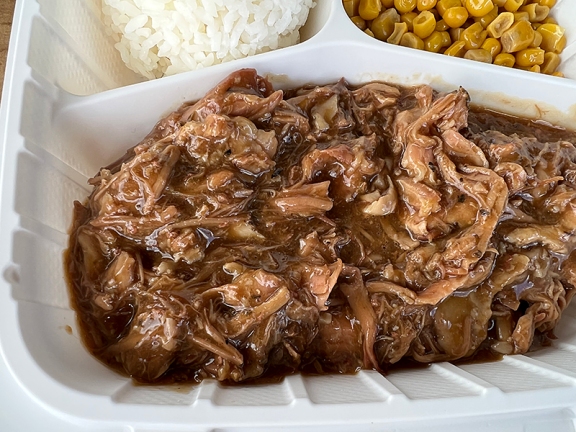 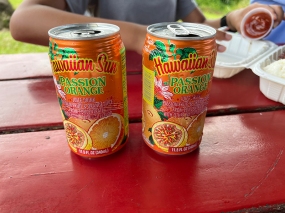 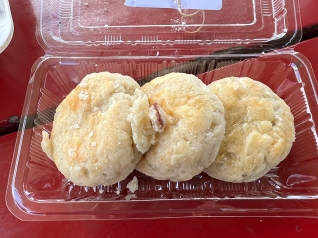 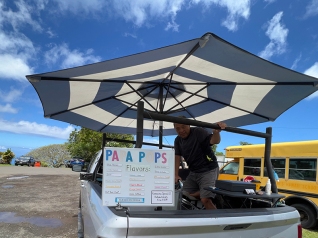 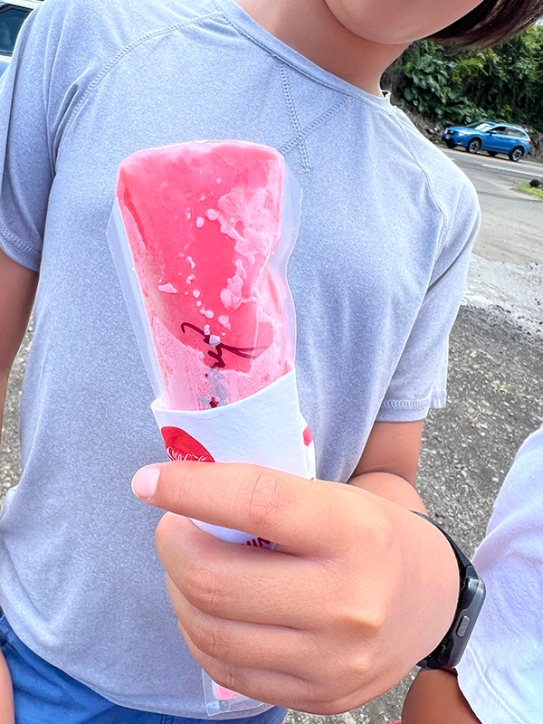 Everyone there was very friendly. One of the other advantages of eating there is that a truck sets up alongside that sells very good frozen fruit pops. These were much appreciated by the younger members of our party.

I didn’t save a receipt so can’t tell you how much exactly it all cost but you can work it out from the menu. I can tell you that I recommend a stop at Randy’s Huli Chicken highly if you are in that part of the island. Bear in mind though that they are closed on Mondays, Tuesdays and Wednesdays and are likely to be gone before the official closing time of 6 pm on Thursdays and Fridays. And on Saturdays and Sundays their hours are more limited yt.

Alright, coming on Tuesday will be my second review of Khaluna. Next weekend I’ll have a Thai report from Los Angeles and a report on lunch at the Big Island at a place that bills itself as the southernmost restaurant in the United States.