On Sunday I posted a look at the green market in Hmong Village, one of the two major Hmong markets/food court complexes in St. Paul—Hmongtown Marketplace being the other. I was there—sans the family—with some friends and, as much as I like the green market there, lunch is the primary reason we were there. My friends had not been there before and so it was also an opportunity to introduce them to the pleasures of the food court. We got there around 1 pm on Saturday, and after some adventures in the parking lot we entered the building and made our way through the maze of the shops and stalls to find the food court buzzing.

Indeed, it was far busier than it had been the last time I was there for lunch in the summer—not this year but several years ago. (They close quite early in the evening, by the way (6 pm most nights), and I’m not sure what the offerings are like close to closing time.) For a while it seemed like finding a table would be even harder than finding a parking spot had been. We stalked the long row of tables that runs opposite the long main drag of the food court, looking for people who seemed like they might be getting done with their meal, picked a group and waited discreetly till they were done. I should say here that going to Hmong Village for lunch on the weekend in a group larger than four, maybe five tops, is not the best move. The tables are all sized for four and you can’t pull two together.

Once you do find a table, however, look for the number on the wall alongside. When you order from one or some of the vendors, if you’re getting something they can’t hand you right away, give them the number and they will bring it out to your table when it’s ready. When you’re done, the tables will be cleared by food court staff and somehow any non-disposable bowls and plates will make it back to their origin. That said, most of the food will be served in takeout containers. This can make sharing a bit of a challenge but you can do as we did: rip the lids off some of the containers and use them as plates (I always wonder if it would be controversial if we took some plates and bowls with us).

Once you’ve found a table the next thing to do is to figure out what you’ve going to get. If it’s your first time you’ll notice that many of the establishments have near identical things on offer. Can you go very wrong picking one or another? I’m not going to pretend that I’m an expert on the Hmong Village food court and can tell you who has the best Hmong sausage or whatever. I can tell you that I always get papaya salad from Mai’s Papaya, the papaya salad specialist at one end of the food court. You can have them customize it to your preferences. I’d guess that a number of the grilled and fried meats are fairly interchangeable across the vendors. The number of customers in front of the different places could be your guide or it could also make your decision easier if you’re not in the mood to wait.

On this occasion we got a bunch of the food court’s greatest hits as attested by a number of aficionados. In addition to the papaya salad from Mai’s Papaya, we got the crispy pork from Lucky Food Express; beef intestine skewers from Mai’s Kitchen (a separate establishment); the Crazy Steak from Santi’s (make sure to get both the pepper paste and the wasabi sauce to go with); and a three-item combo from Lucki’s Kitchen (on this occasion, braised pork belly, a pork red curry, and bitter greens with crispy pork). We rounded out our order with some Hmong sausage and red kapoon—both from Mai’s Kitchen, more for reasons of proximity to our table than anything else.

A meat fest to be sure—and I’m not sure how feasible it is to eat well at this food court if you are a vegetarian. The meat was all very good though. The consensus favourites at the table were probably the Crazy Steak (seasoned skirt steak grilled to your specification and sliced thickly), specially dipped in the wasabi slurry, and the crispy pork from Lucky Food Express. I really liked the skewered and grilled beef intestines and the bitter greens as well. The one dish that left us unmoved was the red kapoon. Two of the party got boba smoothies to end and that was as much as we did for dessert.

For a look at what we ate and at the food court—starting at one end and going in order to the other—launch the slideshow below. Scroll down to see how much it cost and to see what’s coming next. 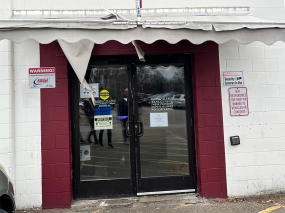 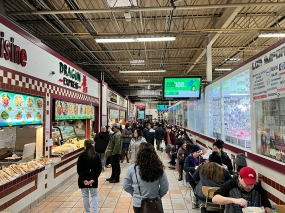 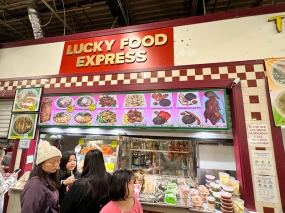 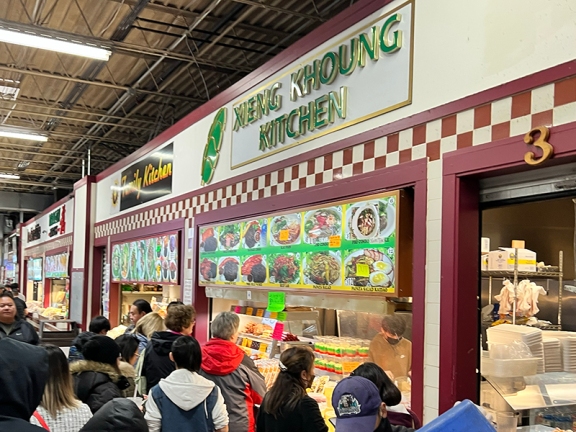 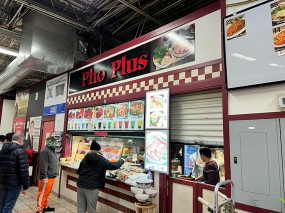 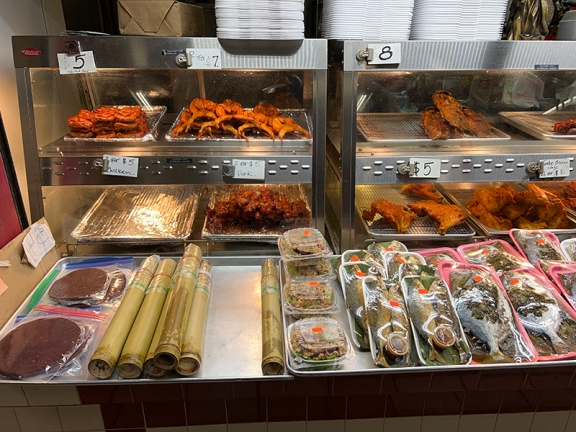 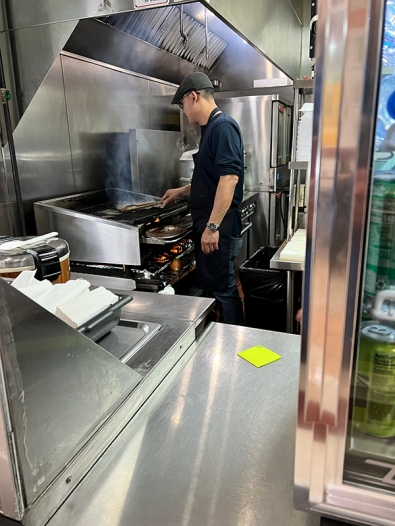 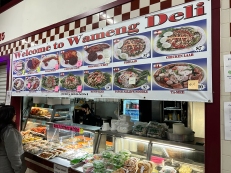 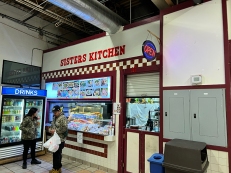 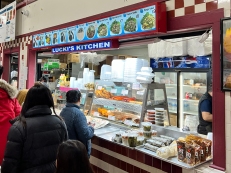 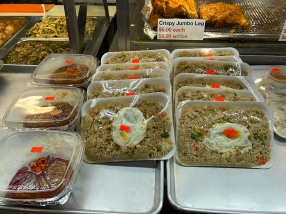 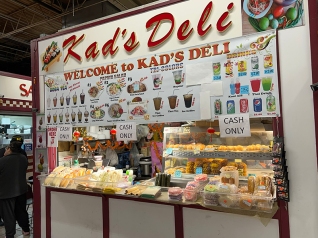 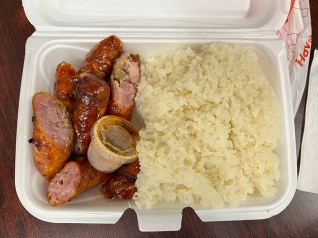 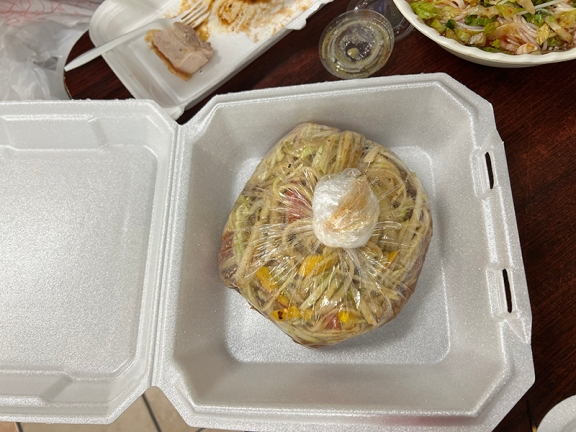 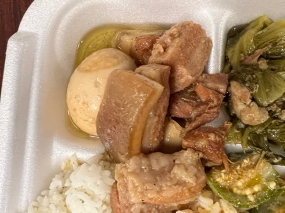 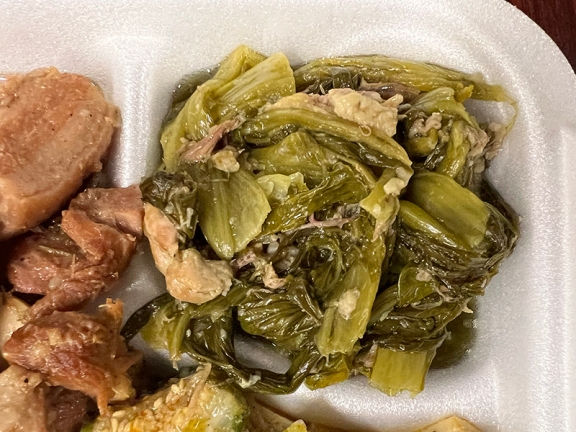 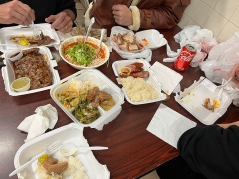 Price of the above? I want to say roughly $22/head. The Crazy Steak was the most expensive at $25, but it’s a lot of meat and totally worth it. The best deal is probably the three-item combo from Lucki’s Kitchen for $9. If we lived closer—and if I were younger—I would, as I said to the two recent college graduates in the party, like to hit Hmong Village repeatedly over several weekends and explore the food court one quadrant at a time. That’s not going to happen though and we’ll probably go back to Hmongtown Marketplace again before returning to Hmong Village—not that finding parking at Hmongtown Marketplace or a table in their much smaller food court is very much fun either.

Oh, the outing almost had a bad end. I had promised the missus I would bring an order of the crispy pork from Lucky Food Express back for her—and had sent her a picture of the order we ate to whet her appetite. But when I went over there at the end of the meal to place the takeout order I was told they didn’t have any more. I scoured the other vendors’ offerings to see if anyone else had something similar but they didn’t. But as luck would have it, my friends were getting other things to go from Lucky Food Express and when I came back dejected (hell hath no fury like the missus when she has been tantalized with and then denied crispy pork) there was a fresh batch just brought out—what the guy had meant was that they didn’t have any just that minute…

What’s next from the Twin Cities food scene? As I said last week, maybe Mexican, maybe Filipino—or maybe something else altogether.