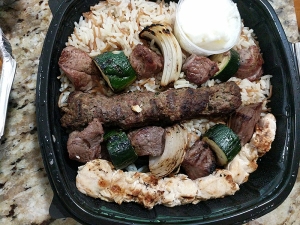 It took the pandemic but I finally made it to Beirut, a Lebanese restaurant in West St. Paul that people have been telling me we should eat at for years. They’ve been open since 1983 (in the same spot? I’m not sure). That makes them older than Babani’s but a few years younger than the original Mediterranean Cruise Cafe, which opened in 1979 in Eagan (though the current location in Burnsville is of a later vintage as is the spin-off Ansari’s in Eagan).  As per this write-up in City Pages from a few years ago, in their early years they served a largely American menu with a few Lebanese dishes that got few takers. Now, it’s all Lebanese food all the time, and as far as I can make out, they are a neighbourhood fixture—still run by the same family though I believe the interior has gone through some changes. They are open for socially distanced dining-in but I was there this on Saturday to pick up take-out dinner. Here’s a brief report on what we got. END_OF_DOCUMENT_TOKEN_TO_BE_REPLACED