The road of excess, I quipped the other day to my old friend William Blake, leads to the palace of wisdom. He looked at me resentfully and jotted something down in his little notebook. I assume he was being a dick because he didn’t have an invitation to a gathering in St. Paul on Friday that featured a lineup of whiskies that would have cleansed anyone’s doors of perception and made everything appear to Man as it is, Infinite (that’s a reference to another little gem I tossed off a few weeks ago). Where was I? Right, the road of excess leading to a gathering in St. Paul this past Friday.

But let’s back up a little first.

As all those on the Malt Maniacs & Friends Facebook group know, Twin Cities based Malt Maniac, Rich Howard was invited this past summer to put together a lineup of distinguished whiskies for a wedding celebration. The budget started out in the low thousands of dollars and very quickly began to escalate, finally stopping just a little north of $15,000. That’s a lot of whisky, you’re thinking, but you’re wrong and really shouldn’t jump to conclusions like that. Rich’s brief from the father of the bride was to emphasize quality over quantity. In the end I believe there were fewer than thirty bottles purchased. This event was, I gather, a high point of the wedding celebrations. Still, a large number of the bottles survived the event largely unscathed and were entrusted to Rich for safekeeping. To many of us who’d followed the planning of the event from the early stages this seemed evidence of both a just universe (“Superb whiskies entrusted to a whisky geek”) and a deeply unjust one (“It should be me, dammit!!”).

Luckily, Rich is a generous sort of soul and he proposed to the father of the erstwhile bride (whose generosity has already been established) that they put together a second gathering later in the year bringing together a number of Rich’s whisky geek friends to take a fuller measure of the lineup. This gentleman (let us henceforth refer to him as John, for that is his name) agreed readily and in the fullness of time it came to be that we gathered this past Friday at the home of two other generous souls named Tom and Michele to celebrate John and Rich’s birthdays and the whiskies themselves. (That’s how many generous souls it takes, you see, to cancel out a miserable bastard like me.)

[Now I should say before going on that I am fully aware that this post is square in a very nauseating genre of reportage in which one talks about decadent private events in public, sparking envy, disgust and/or pornographic responses in people who were not present. I am also aware that $15,000 is rather a lot of money and that no collection of whiskies or other luxury goods can possibly justify such prices; and that an evening like this makes clear that even at the prices I normally pay for bottles this passion of mine is a little hard to reconcile with my generally socialist impulses. Of course, being aware of the contradictions doesn’t make them go away, so please feel free to heap coal on my head, to lampoon me, and to call for my blood to stain the gutters red, come the revolution.]

The lineup was rather spectacular. The principal tasting was of a 12 malt flight in this order:

(Stars indicate the ones I tasted at least a little bit of.)

Outside of the main flight the following were also open for tasting, as aperitifs before the main event got underway, as substitutes for anyone who wanted to sit a particular whisky in the flight out, and as supplemental tastes at the end of the evening:

And for those who wanted to take a bourbon/rye detour:

We tasted small pours of the main flight together in sequence, Rich introducing them all, enduring only a tiny bit of heckling as the evening wore on. As informative as Rich’s preambles were, the most remarkable thing about his performance may have been his ability to pause mid-syllable whenever a camera was pointed in his direction, flash a 5000 watt smile and then resume exactly where he’d left off.

The pours were just large enough to give everyone a good sense of each whisky but not large enough to risk anyone getting drunk over the course of the 3-4 hours we were there. This was not the kind of occasion, though, at which one takes notes or tries to get at every facet, or even very many facets of each malt. We were not seated at tables with pen and paper but were roaming the room, chatting about every subject under the sun, including but not limited to the excellent whisky in our glasses. Somewhere in there one of the guests, Dennis materialized with bagpipes and presented a resounding rendition of “Happy Birthday”. Bagpipes, like hemorrhoids or sarin gas, are not universally beloved, and it is testament to the power of the whiskies we were drinking that your correspondent did not throw himself out of a third storey window. I kid, I kid: the credit goes entirely to Dennis’ restrained yet somewhat idiosyncratic performance. Later in the evening the enterprising teenaged son of our hosts who runs an online business selling military surplus gear emerged and made a couple of sales to two gentlemen who I suspect usually have a different notion of formal dress.

This is not to say that we did not pay attention to the whiskies or appreciate them, far from it; it’s just that a gathering of this kind is not the place to generate detailed whisky reviews and that the taking of detailed notes (despite what the obsessive nature of the regular fare on this blog may suggest) is not the only or best way to enjoy any whisky, no matter what its age, cost or provenance. I have reviewed some of them before in detail (see here for the Glen Ord 30 and here for the Lagavulin 21) and detailed notes on some of the others, taken in very different circumstances, will appear here later.

For now, I will note only that on the night it was between the Lagavulin 21 and Laphroaig 27 for consensus favourite, with the Lagavulin winning by a nose, I think; or maybe I’m just projecting my preference onto the group. And I think most people had the Highland Park 40 and the Talisker 35 in their top five as well. Th other standouts for me were two whiskies that were not in the main flight: the Caol Ila, 1985, which, in my opinion, was superior to the also-excellent Port Ellen; and the G&M Longmorn 1971, which I’ve had and loved before (and will be reviewing formally soon). And the Laphroaig 21, despite being sandwiched between the two peat-sherry monsters at the end of the evening, made a good showing too. The Ardbeg 1975 was excellent as well but, as on the previous occasion that I tasted it, did not make me as melancholy for a bygone era of Ardbeg as some of the talk about it had led me to think it might. It is quite possible, of course, that its more subtle charms were muted a little by following the Talisker 35 (rather boisterous and vibrant for its age); I regret deeply that I have no photographs from the evening that could be used as leverage to unlock a further sample for more careful review. (Or do I?)

So, how to end this post? Well, in reviewing the Lagavulin 21 some weeks ago I’d noted that I’d just recently tasted the Laphroaig 27 and pronounced the experience to be the End of Whisky. (The Lagavulin 21, of course, gave that dramatic statement the lie just a few days later and trumped the Laphroaig again when tasted in close proximity.) Drinking those two unfeasibly excellent whiskies alongside the rest of this stellar lineup might have been expected to prove a little enervating after the initial exhilaration passed: what, after all, could follow such a sequence, especially for someone like me who does not have access to other whiskies of similar reputation and cost? As it turns out, as much as I enjoyed all of these whiskies, I left with a renewed appreciation for what I do drink on a regular basis: whiskies which do not break the bank but at a fraction of a cost of many of the bottles we drank on Friday provide almost as much pleasure (and in some cases more).

And as for gems like the Lagavulin 21 and Laphroaig 27, in a reviewing culture where scores in the 90s are often tossed about with abandon they bring proper perspective. And as whiskies released in our own era they ought to remind us that great whisky is still being made and bottled; and while not everyone, alas, can afford to buy these particular bottles or have a chance to sample them, there are other bottles out there, within reach (as the Lagavulin 21 was on initial release), that can put the same expression on our faces that all of us at the tasting on Friday sported for most of the evening. At any rate, that’s as much wisdom as I am capable of two nights later.

Thanks again to John and Rich and Tom and Michele, and to everyone else who made the evening such a pleasurable experience. 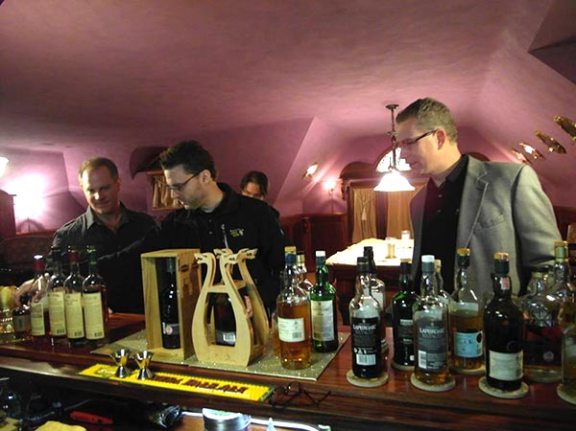 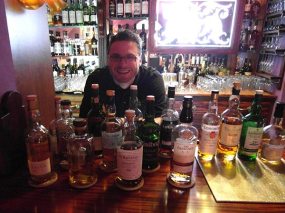 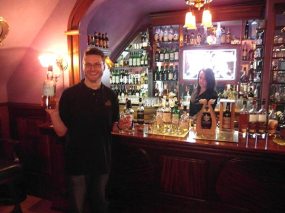 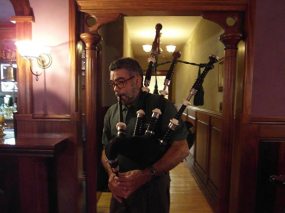 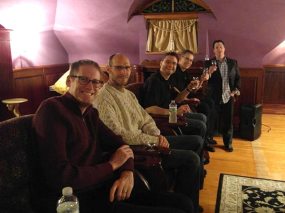 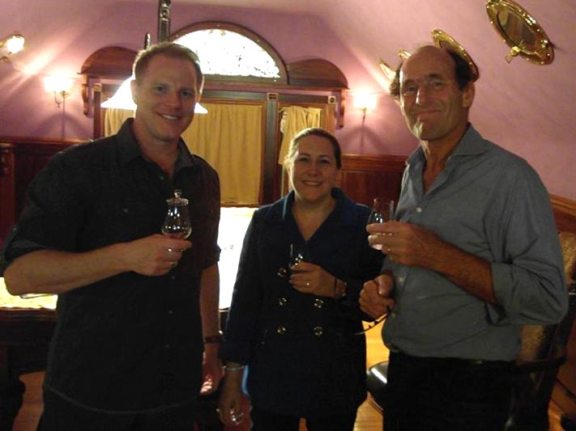 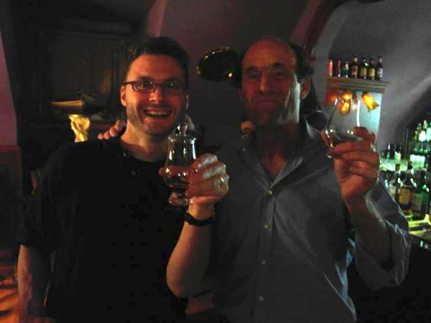 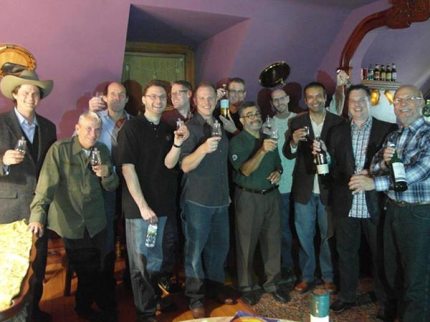 10 thoughts on “Of Weddings, Birthdays and Whisky”