Okay, so in my last Delhi restaurant review I noted of Indian Accent that it must surely be on the short-list of highly talked about and ambitious restaurants in the city and environs. It has recently been joined on this list by a restaurant very far away from it in price and ambience, though not, as you will see, in culinary scope. I refer here to the new(ish) restaurant at the Crafts Museum in Pragati Maidan, the unfortunately named Café Lota. We ate two wonderful meals there, but before we get to them let’s take a bit of a necessary detour first.

“Why ‘unfortunately named'”? ask all my non-South Asian readers. Well, because while a lota technically is any water receptacle of a certain shape, in day to day usage it connotes a particular use to which many lotas are put: for holding the water that is used to um cleanse certain parts of one’s body after certain excretory events have taken place. This, by and large, is the association that springs to the mind of the vast majority of South Asians when they hear/read the word. Naturally, given my general gravitas I found this to be the most wonderful bit of naming I had encountered in a long time (imagine a Bidet Bistro or the TP Diner), but given the location–at the very serious Crafts Museum–I was at a loss to understand how it had come about. And then I found out.

Our second meal there was in the company of a well-known journalist who is very well connected to the NGO/social welfare crowd in Delhi. A little into the meal he waved cheerily at a group of very distinguished looking older women at another table and one of said older women came over to chat. The conversation turned very quickly to the restaurant and I said that we’d been wondering what they would do during the summer and monsoon, given that it is an outdoor restaurant. She said something like “We have been wondering about that”. Since she seemed to have some connection to the place I finally saw my opportunity and asked who had named the restaurant. She said, “I did”; in retrospect this was a sign that I should have ceased the line of questioning, but the follow-up was already on its way out of my mouth: “Somewhat unfortunate associations, no?”. Oh, she was not pleased with me. She kept her composure and informed me that while such associations would perhaps occur to some (“cretins like you”, she must have parenthetically added but not said) the more important thing is that this was the restaurant at the Crafts Museum and if I would only go inside and watch a 5-minute video interview of the great American designer Charles Eames I would learn that in the 1960s he had declared the lowly lota to be the most perfect object he’d seen in India. As I had a reputation as a diplomat to maintain, I responded, “Well, that’s all very well for Charles Eames but a five minute interview is not going to erase associations formed and maintained over 44 years of my life”.

At this point she excused herself before I could also ask her why the restaurant at the Crafts Museum should care more for what some hotshot American designer said about the lota than about what every craftsperson at the museum (not to mention middle-class cretins like me) thinks when they hear the word. Ah well. I doubt I made any sort of impact on her world-view, but as I said on a Facebook conversation where I recounted this conversation right after it happened last month, someone needs to say these things to people who are more in tune with the views of American designers than the associations of the everyday Indians the museum is supposed to celebrate and educate. It emerged later that the person I’d alienated–only the latest in a long series–is the very distinguished Dr. Ruchira Ghose.

Anyway, on to the food, which is far less giggle-worthy or clueless.

So, what’s the deal with the food at Café Lota and why is it getting so much buzz? The reasons are these:

1. They mostly serve updated takes on various classic dishes and flavours from different regions of India.
2. These updated takes are somehow both deeply traditional and rather modern.
3. In some cases the “modern” bit comes largely from plating and composition and in some cases from innovative re-castings of familiar dishes.
4. The food is almost uniformly excellent.
5. The food is incredibly reasonably priced.

Points 1-3 above, unfortunately, are a little hard to get across to people who are not familiar with these dishes/foods in their usual avatars. But it should be borne in mind that not everything is in this vein: some of the dishes are very traditional indeed, though usually with a bit of a twist. The following covers what we ate over two lunches with friends–we ended up eating almost everything on offer over the course of the two meals. 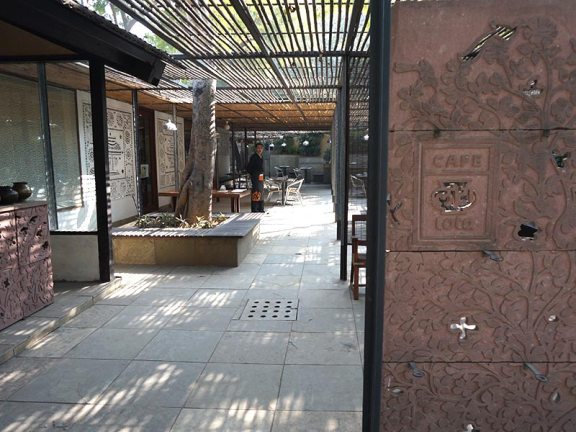 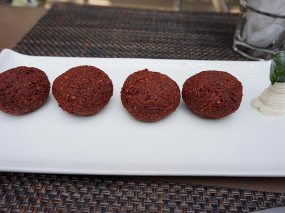 “beet root chops, “bhaja moshla” cream cheese” The beet root chops are classic indeed and no one who has eaten them in Calcutta will find anything objectionable about them; the bhaja moshla (fried spices) cream cheese is less classic, to put it mildly, but it works very well here. (Chops in this context refer to what would probably be croquettes on American menus.)

As you will see, there is nothing untoward going on inside the chops. These were much lighter than is usual though.

“palak patta chaat” Battered and fried spinach leaves with a very nice chaat. Really lovely–we got this on both occasions. (Cafe Lota)

“”fish n chips”” The fish part is Amritsari-style batter-fried sole fillets, with popped amaranth seeds in the crust. The “chips” part is thick sweet potato fries. Quite nice. I only wish there had been a Patiala peg to go with….

“arbi ke kabab” Crumbed and fried balls of mashed colocassia. Calling them kababs is cutesy and the dish itself is nothing special. 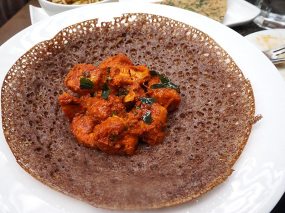 “chicken ghee roast” We got this on the second occasion, which is a shame because I missed the chance to eat it twice. The chicken was perfectly tender and the spicing was very balanced, and the appam, made with roasted coconut, was divine. One of the best things I ate on the entire trip. 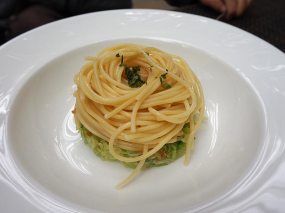 The soup, a tangy and spicy tomato base, is poured around the noodles and veg. Attractive presentation, but just so-so results. 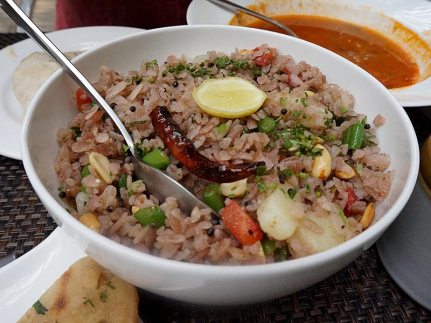 “kanda batata laal poha” Red rice poha (husked, flattened and dried rice). This is not a dish that can rise to great levels but it is very good comfort food, and it is to the chef’s credit that he doesn’t try to tart it up.

“bhatt ki churkani, alu ke gutke, bhang ki chutney” A platter of Kumaoni dishes. A “curry” made with an indigenous bean, a lightly spiced potato dish and chutney made from bhang (hemp seeds)–plus a very nice raita. The hemp chutney was a little grainy but quite nice.

A closer view of the bhatt bean. 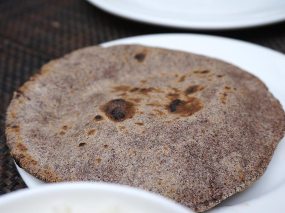 “raagi ki roti” We got a roti made with raagi (millet) to go with. Our boys were huge fans of the wide range of breads they got to eat in India and this was an exciting one for them.

Close-up of the raagi ki roti.

“kerala chicken stew” A lighter version of a classic dish. We got it with red rice and to be safe got an appam on the side as well. This was just lovely.

It was served with a bean sprout chaat.

And a spinach pao (bread). The spinach pao was striking to look at but entirely boring to eat. Also, I’m not sure it’s visually very attractive to have so much dark green together.

“konkan fish curry” No such complaints about this Konkan fish curry which we got with red rice. Again, as with the stew, this was made with a lighter touch than is usual (as at Swagath, say) but had lovely, classic flavour.

“parsi salli boti” The classic Parsi dish of mutton (goat) in a tangy mutton curry topped with shoestring fries (the Parsis are not into the healthy eating thing). Very nice.

“bhapa doi cheesecake” A very nice idea, reminiscent of Indian Accent’s mishti doi cannoli, but not quite as successful as that dish. The doi is just too dense. This has been reported by friends who’ve eaten it on other occasions as well–more experimentation needed. 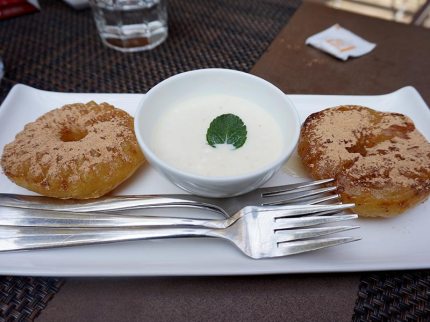 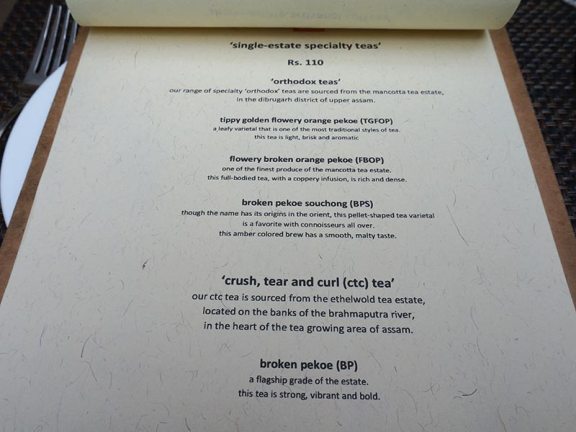 I am happy to report that they have a nice selection of single estate teas; I do wish they weren’t all from Assam. At least one nice Darjeeling would be good. And while they’re at it maybe add one from the Nilgiris and one from the Dooars and maybe some Kehwa too? 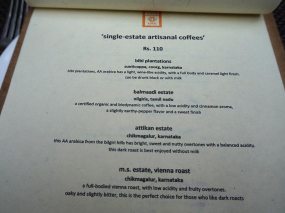 And the coffee drinkers were well pleased with the selection of single estate South Indian coffees as well.

And the bill arrives in a lota, admittedly a far fancier one than has probably ever been carried to a field early in the morning.

Everything comes out of this compact kitchen. 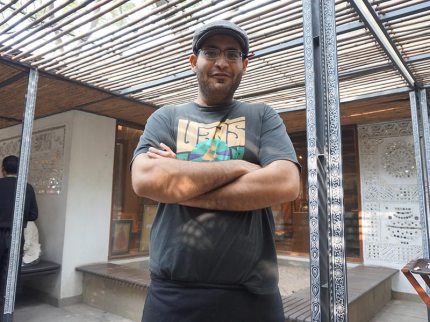 The kitchen is supervized by the genial and young Chef Dua. We had a brief and pleasant chat with him on the second occasion. He tells us that he has little to no formal training and has learnt largely from his mother. While I don’t doubt this I have to say that I am a little sceptical that there is not any other expertise in the kitchen. The dishes served are so much from within each region they hail from as to suggest more experienced conception. Well, whatever the source of these recipes I can say that Chef Dua has the kitchen executing perfectly. And his plans for menu expansions seem exciting as well.

All in all, two very good meals; while not everything was successful a lot was just excellent. I can only hope that Café Lota will continue to be successful–it was packed both days that we were there, and there’s still a lot of buzz about it a few months after it opened–and that its success signals some new directions in the restaurant scene in Delhi (though they do need to figure out the summer and monsoon cover). We ate here right after our meal at Indian Accent and I have to say that I enjoyed these meals more than I did that one. Granted, there’s not as much complexity in what’s being made here, but the pleasures are greater and the price is a fraction of what you’d pay at Indian Accent. I’m not suggesting that the two need to be chosen between–far from it. I do think that both are required destinations for anyone visiting Delhi with an interest in food.

And, oh, you should work up an appetite and work off the food by wandering the quite wonderful Crafts Museum before and after as well.