Well, it’s the middle of the month and there haven’t been any food posts yet. To rectify that here is a brief account of a meal at Chimborazo, a popular Ecuadorean restaurant in North Minneapolis (way up on Central Avenue).

I don’t know anything about Ecuadorean food and I am going to refrain from holding forth like an expert after some desultory googling. I did know going in that Ecuador has an extensive coastline as well inland mountainous areas but I’d never really thought much about what that might mean food-wise. If I had thought about it perhaps I would have guessed that the cuisine has distinct zones with seafood and coconut at one end and a lot of starchy stuff at the other. What I would not have predicted is the use of peanuts (yes, yes, please remind me that peanut is native to South America). In some ways the food we ate felt like it was from somewhere between the Caribbean and South East Asia. If this seems outrageous, please chalk it up to my ignorance and tell me better.

A quick word or two about the location etc.. As I said, it’s up on Central Avenue. We drive by it regularly on our Korean and Indian grocery store runs even further north on Central, but I’d never given much thought to the neighbourhood. The crowd at the restaurant, which is a small but bright space, seemed on the Saturday morning/afternoon that we were there to be a mix of a hip anglo and hispanic crowd–I don’t know if this describes the neighbourhood as well. The place is a bit tightly packed and was bustling the whole time we were there. They, very smartly, offer a brunch menu as well which along with Ecuadorean dishes features pancakes and eggs and toast and so seem to cast a wider net than one might otherwise expect. This was a bit of a boon for us as it offered a fall-back option if either brat got too picky (as one did).

So, from a position of complete ignorance, this is what we ordered (all names and descriptions taken from the menu). As always, clicking on the thumbnails will open a slideshow with captions of larger images which will allow you to properly appreciate my skills as a point and shoot photographer in low light conditions. In my defense, this is not, in general, very photogenic food.

Ceviche de Camarón, Shrimp cocktail with red onion, tomato, lime, and tostados. Served with patacones. On the whole, this was a little too acidic for me, and the shrimp were a bit overcooked, but I enjoyed the tostados (some sort of fried corn) and the patacones (the plantain chips). 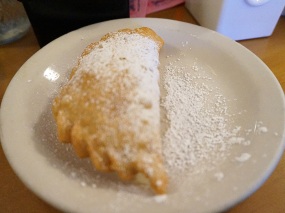 Empanada de Queso. Along with the ceviche we got a couple of empanadas to start. Both were quite good. This one was a plain cheese empanada. 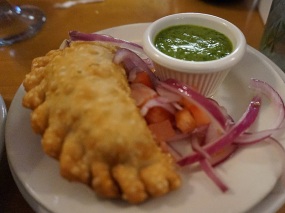 Empanada de Carne. And this one was a savoury beef empanada. I really enjoyed the aji criollo, the tangy/hot cilantro sauce, which was basically indistinguishable from the Indian chutney made with similar ingredients.

Caldo de Bagre. Catfish soup with cassava and plantain in a savory peanut broth. I much preferred this soup with catfish. The flavours seemed less muddied.

Hornados con Papas. Roast pork with llapingachos, mote, and tomato-onion curtido. This was the missus’s entree and was quite nice. The roast pork in particular was very nicely done, and I quite enjoyed the llapingachos–cheesy potato pancakes with the general texture of Indian alu tikkis. Mote, in case you’re wondering, is the hominy.

Encocado. Mahi mahi or shrimp stewed in a flavorful coconut sauce. Served with rice and sweet plantain. I got it with Mahi Mahi. This was the coconut milk surprise. The description did say coconut sauce but I wasn’t expecting coconut cream richness that would rival any Thai thick curry. Alas, the coconut milk was somewhat cloying, and probably came out of a can. Cutting it with a squeeze of the lime helped but this was almost a bit much. Also, I was hoping for a little more of the plantain.

As I said, I know nothing about Ecuadorean food and so have nothing to say about the authenticity of flavours and presentation of any of this. Of everything we got I enjoyed the empanadas and the Caldo de Bagre the most, and if you were dining alone I’d suggest you get a couple of empanadas and the larger portion of the soup and call it a meal. That would certainly hit the spot in the winter here.

With tax and tip this came to $72, which felt a little high to us for what it was. Still, I can see coming back and trying a few more things, but I’m not in a huge hurry to do so.