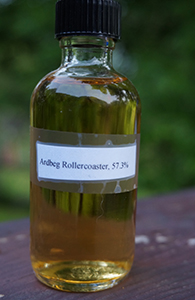 After Monday’s discontinued Ardbeg 17 here is the one-off Rollercoaster. This is a vatting released in 2010 to commemorate the 10th anniversary of the Ardbeg “Committee”, and comprises spirit from each year from 1997-2006. In other words, there’s 3-12 yo whisky in this (you can get the details of the proportions at the Ardbeg Project). This was around in the US for a while at a fairly reasonable price, but, of course, I didn’t bother trying to get a bottle till it was too late. Still, thanks to a sample swap I get to finally try it. Let’s get right to it.

Ardbeg Rollercoaster (57.3%; from a sample received in a swap)

Nose: Well, there’s no shortage of phenolic peat on the nose with this one. Also: seashells, lemon and a big hit of vanilla. Gets quite medicinal as it sits and there’s some wet rope and an organic/rotting kelp note too. The vanilla comes back up again with time and it gets quite creamy. With water the lemon is out on top but the vanilla-cream is still around.

Palate: Sharp peat and then a prickly chilli pepper note followed by heavier, more tarry smoke transitioning to a sweeter finish. On the second and third sips I get a lot more salt and a lot more lemon. And after a while the vanilla starts showing up here too and the chilli pepper turns more bell peppery. Okay, let’s add water. Gets sweeter with water but the smoke also gets more inky.

Finish: Long. Starts out sweet and then there’s quite a bit of smoke. With water the inky smoke from the palate hangs around.

Comments: I tasted this right after the 17 yo and I have to say that the distinction between the profiles of old-style Ardbeg and the post-Glenmorangie takeover Ardbeg could hardly be more obvious than in this juxtaposition. The peat is front and center here and is far more assertive and brash than in the 17. Well, it’s loud and bold but it doesn’t seem to have so very much to say. Perhaps it suffers from the close juxtaposition with the more discreet charms of the 17 yo. Still, I wish I had gotten around to getting a bottle when it was on the go. If I remember correctly, a store in New Jersey had it in the $60s for a while. I have to say that while it is technically a 3 yo and has a fair bit of sub-10 yo whisky in it, it doesn’t taste so very young to me. I liked it better neat.