For years I’ve been down on sushi in Minnesota, all the while harbouring a guilty secret: I hadn’t actually eaten at any of the better reviewed places. It just seemed highly unlikely to me that sushi at any of these places would be any good. No, I didn’t think this because we’re in the middle of the country. Given how much fish flies around the world and how much of what shows up in most sushi places in the US is previously frozen anyway that’s not the problem. Which is not to say that it wouldn’t be nice to get live Santa Barbara uni and spot prawns as you can in the better places in LA (for example, at Kiyokawa) but there’s plenty of other good fish that should be theoretically available. To be clear, I wouldn’t under any circumstances expect there to be sushi bars here on par with the top or second-tier places in Los Angeles but theoretically, at least, one might expect there to be places on par with the better neighbourhood establishments in LA. But I didn’t think this was likely either.

My prejudice stemmed from the fact that the websites of all the top places in the Twin Cities list far more rolls than they do nigiri; most of the reviews from the major local food outlets also have a lot of coverage of rolls (be it Heavy Table or MSPMag). Now, I have nothing against the occasional roll but it seems highly unlikely that good and interesting fish is going to be available at places that seem to specialize in rolls and cater largely to people who want them; and it’s hard to take seriously glowing reviews that are themselves roll-heavy (and in at least one case seems to have futomaki and temaki confused—see the fourth para in the linked article). And so we were content to not eat marginal sushi in Minnesota, and feed our cravings on our regular trips to LA.

Of late though I’d begun to feel that I should try out at least a couple of the local big names—if they were at least on par with better neighbourhood places in LA at similar prices they might be worth the occasional visit, or so I reasoned. Accordingly, I made a list of the possibles—Origami, Masu, Fuji Ya, Sushi Fix and Sakura—and began to gather intel. There were some limitations: it had to be at lunch (we did/do not want to squander our rare babysitter-enabled dinners out on dicey propositions) and since we can’t sit at a bar with the kids on weekends it would have to be a weekday when we were both free for lunch. Well, that day was yesterday (thanks to rarely coinciding breaks at our places of work). Sushi Fix in Wayazata was at the top of my list but they’re not open for lunch. Based on where else we needed to be the Origami flagship in downtown Minneapolis was the most convenient—and as it is generally considered the top option it seemed like a safe bet.

Alas, I am here to tell you that the lunch confirmed all my prejudices. It simply wasn’t very good, and a lot of it bordered on the bad.

I was optimistic going in, as their website seemed to list quite a lot of fish (in addition to quite a lot of rolls). I asked the young sushi chef in front of us if everything on the menu handed to us was available and he said it was. Which was a weird thing for him to say as this was the ensuing exchange:

Me: Can we start with two pieces of the tai?

Me: Hmmm, okay, then can we start with two pieces of the hirame?

Him: We don’t have that either.

Me: Right, how about the inada.

Me: Well, okay, how about two pieces of the kohada?

Him: Sorry, we don’t have that either.

At this point I looked around to make sure we weren’t actually in a cheese shop and asked what he did actually have that we might start with (the only things visible to us were cuts of salmon, tuna, mackerel and various shellfish and cephalopods and that’s not what we wanted to open with). He conferred with the Japanese sushi chef and they produced some barracuda. And it was not a good start. The fish was dry and the rice was even drier and harder. And that was pretty much the tone for the next few pieces of fish. It got so bad that after five pieces my wife bailed on the sushi and ordered some hot food for herself. I manfully kept on keeping on, hoping that something good would eventually show up. And while eventually a few good things did show up, the meal, on the whole, was not good. (By the way, their menu lists “real wasabi” as an option for $3; we assumed this means they give you real wasabi alongside on your plate while using the usual faux version in making the sushi, and as we’re not in the habit of dunking our sushi into a wasabi-soy slurry we passed.)

Click on an image below to see what we ate and read detailed descriptions. Please bear in mind that it all looks much better than it actually was. 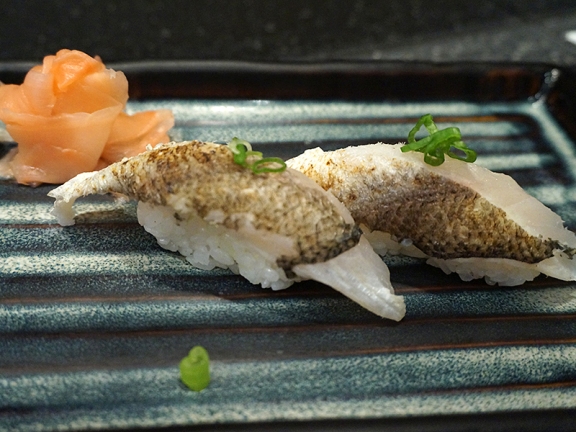 Barracuda. I’ve already gone over the reasons for it being very not good.

The texture of this yellowtail was fine but it had almost no flavour, and none of the unctuous oily character it should have. 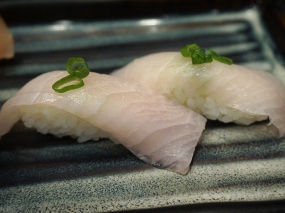 The texture of the kanpachi/amberjack was a little tougher than it should be and it was also sans flavour.

The sweet shrimp was similarly characterless. 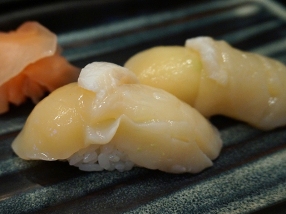 The scallop (from Hokkaido, I think), however, was actively bad. Not sweet at all, it just didn’t seem fresh at all.

The deep-fried shrimp heads showed up at this point and they were by far the best thing we’d eaten so far. My wife took this as a sign that the kitchen was more trustworthy than the bar and bailed on the raw in favour of the cooked. 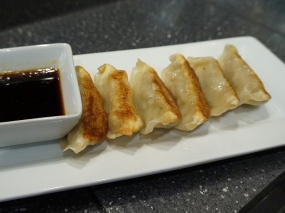 These gyoza were acceptable.

These shrimp were fine but not as crispy as they should have been. She also got two skewers of yakitori which were eminently forgettable.

I continued with the nigiri. The Japanese chef suggested the samba, a cured silvery fish—new to me and so I went for it. It was characterless. By the way, I can’t find any information on it online. Our guy insisted it wasn’t regular saba (mackerel) and it didn’t look or taste like it. It’s possible I misheard the name but I did ask the guy to spell it. Addendum: I am told that this is in fact “sanma” or Pacific saury.

This sockeye salmon was a little better but again drier than it should have been.

I thought I would end with this duo of yellowfin tuna (ahi), regular and toro. However, both pieces were good—the toro was quite good—and gave me hope that there might be more good things to be had. 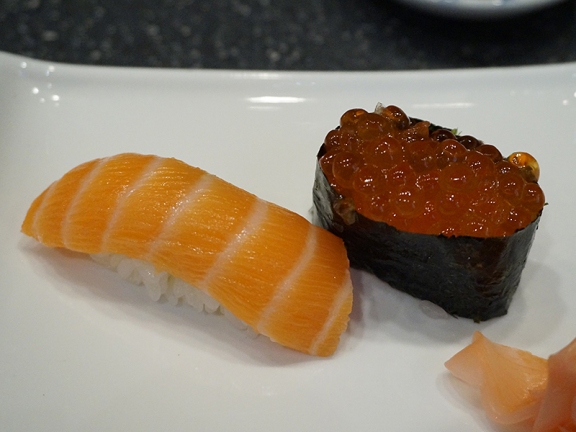 Accordingly, I got the regular salmon and salmon roe. The salmon was dull but the ikura was pretty good (briny and clean). 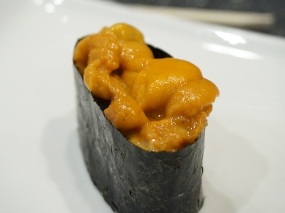 Encouraged by the ikura I took a chance on the Hokkaido uni and this was really quite good. I really should have stopped here…

But I made the mistake of getting a piece of this aji. Dry and chewy to the point of being gristly it brought the meal to an end in keeping with the deep lows of the beginning.

If you kept count, that’s five out of thirteen pieces of nigiri that were not bad, only two that were better than mediocre (the ikura and the yellowfin toro) and only one that was really good (the uni). The other eight ranged from mediocre to actively bad. (There were other listed fish that they also didn’t have, by the way: no bigeye tuna or albacore. Despite this the guy actually said to me at one point, “we have a lot of variety here”!)

It’s possible, of course, that we caught them on a bad day or had an unrepresentative experience. You might also say (as one person has on Chowhound in response to my post there) that it was foolish of us to expect good fish for lunch on a Monday as there would not have been deliveries in time from the coasts. Well, I don’t really buy this. For one thing, as per the Japanese chef, Origami doesn’t get deliveries every day anyway (they order “when we need it” he said) so there’s no guarantee Tuesday or Wednesday would be any better from either a selection or quality standpoint. Especially as I would imagine most places get deliveries of flash frozen fish which they should have available for prep any day of the week that they’re open. It’s also the case that it’s a myth to think that all sushi is best if eaten as close to the fish being caught as possible. The bigger problem I’d hazard is that their market largely asks for rolls and so they’re probably not overly worried about their fish (how much/what to buy or what state to serve it in). And no self-respecting sushi restaurant should sell fish if they don’t think it is of acceptable quality; I’m fine with a limited selection if all of what is served is good.

In any case, it wasn’t just the fish that was a problem (and, of course, some of it was quite “fresh”—I really doubt they’re getting “fresh” toro or uni from Japan in every day). We don’t think the rice that was used at first was fresh (it got better halfway through the service). The best I can say about the knife-work of our sushi chef is that it only occasionally lapsed into the zone of the incompetent; he also put a little too much of the crappy wasabi in some of the sushi. He also didn’t always seem to know which fish was which—whether I asked for something or he recommended it himself he invariably would need to ask the Japanese chef which fish it was. He also described the Japanese uni as being from Kyushu (the other chef intervened to say it was actually from Hokkaido).

Anyway. I considered not bothering to follow the waste of money and a meal with the waste of time in writing it up. But it seems worthwhile to put some alternative views out there. If I can save even one person from repeating our experience some good at least will have come from this debacle (which, by the way, cost $95 with tax and tip). Me, I’m not coming back again to see if they can do better.