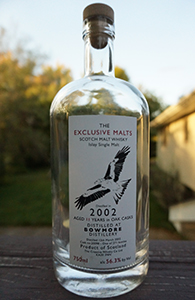 I received a sample of this Bowmore 11 in a swap with Michael K. of Diving for Pearls and after I received it I realized I already had an unopened bottle of it. I finally opened it a few months ago for one of our local group’s tastings and we finished the rest of the bottle at our August tasting—I occasionally repeat bottles that were contentious in some way or the other to see if our responses might change as the whisky does with time and air. I’d planned to review it when the bottle had just been opened but didn’t get around to it because I read Michael’s review and wanted to forget about it before tasting—and then I forgot about the whisky completely. This review is of the last pour from the bottle, but please keep in mind that the evening before this had been at the halfway point—so it’s not a hugely oxidized pour that’s been sitting at the very bottom of the bottle for a long time (and the bottle itself was only open for less than five months).

(I’d also assumed I’d photographed the bottle when I’d originally planned to review it but while posting this review realized I never had: hence the picture of the empty bottle.)

Nose: Peppery lime zest, vanilla, cream and some floral notes. A bit of soap too. There’s some other musky fruit in there too but it might take water to bring them out. No smoke at all really. A few drops of water push the soap back a bit and bring out some cured meat.

Palate: All the stuff from the nose but, alas, the soapy note is much stronger here (glycerine). It’s also much more acidic on the palate than on the nose, almost hot. The floral notes here are much more mezcal/eau de vie’ish. A little bit of sooty smoke but you have to look for it. Even soapier on the second and third sips. The soap recedes a bit on the palate too with water bringing out some melon (honeydew) and more lime zest.

Finish: Medium. The acidic and soapy notes hang on the longest and the soap gets a little too astringent at the end. The smoke is most pronounced in the finish. With each sip the astringence kicks in earlier. Water improves the finish as well.

Comments: At first this seems like it is drinkable enough, neat, despite the soap but the soap gets stronger with each sip, rendering it finally too flawed to make it into the 80s. Water does improve things quite a bit (though more on the nose than on the palate). (Note: what I am calling “soapy” here has a strong overlap with new-makey floral notes.) I will note that it was not quite as soapy when the bottle was first opened, though even then I had it at 82 points in my spreadsheet, only a little higher than my score today. I do still have Michael’s sample and that was poured at an earlier stage in the bottle’s life—I’ll be trying that soon too and will be interested to see if it’s very similar (I’ll report in the comments). In the meantime, if you still have a bottle I’d recommend drinking it with water.