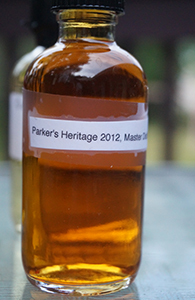 Rounding out a week of special release bourbons from some of the most famous American distilleries here is my review of the 2012 release in Heaven Hill’s Parker’s Heritage series (so named for their now-retired master distiller, Parker Beam). The real story here, of course, is the unusually presentable sample label from Sku.

This is only my second outing with Parker’s Heritage. I loved the 2013 release (the “Promise of Hope“) and after tasting the sample I reviewed I went out and purchased a bottle—it was still on shelves in Minnesota in early 2014. But by the end of the year the annual release hype included the not very cult-friendly Heaven Hill as well and it goes without saying that I didn’t even catch a glimpse of the 2014 edition.

Parker’s Heritage 2012, Master Distiller’s Blend of Mashbills (65.8%; from a sample received in a swap)

Nose: Sweet at first sniff but then here’re all the familiar rye notes and then wood (first pencil shavings then polished oak). Some cherry mixed in with the rye and some cinnamon too. After it settles down corn and maple sweetness emerges to join the rye and there’s a mellow toffee note in the background as well. Very nicely balanced. With more time it starts getting quite sour. With water it gets quite sweet and there’s more of the pencil shavings too.

Palate: Starts out sweet here too but it never goes away. The rye bobs up and down (mint and dill mostly) but it’s mostly about caramel and maple syrup. Remarkably drinkable at full strength. With more time it’s spicier and woodier. Okay, time for some water. Unlike the nose, the palate gets less sweet and more sour with water.

Finish: Wow, on the finish at first there’s a strong crossover with some older PX cask single malts I’ve had, as it gets raisiny and syrupy; the oak re-emerges too and it’s just a bit tannic at the very end. After a while though it’s just more generically bourbonny. As on the palate with water, maybe even drier.

Comments: Sku’s notes are quite different. I didn’t get as much of the sourness he notes as a flaw on the palate (not even enough to mention). In fact, I thought it was the sweetness that was a bit overbearing. If my sample was from the bottle he reviewed in 2012 the added time/air might explain the difference—and it might also explain how drinkable I found it at full strength. Then again, I haven’t looked at any other reviews to see if my notes are way out there. I quite liked this, but as with the Stagg 2013 didn’t find it to be anything so out of the ordinary.