I’ve been meaning to get to Corner Table for a while for my very slow rotation through the current big names on the Twin Cities fine dining scene. For one reason or the other it hasn’t worked out in the past but this weekend we finally got there. It was a pretty good meal, on the whole, but it somehow simultaneously disappointed anyway. Well, I shouldn’t be vague, I know exactly why it disappointed: it was a meal that mostly pleased on the plate and palate but felt very unimaginative and by the numbers. This could be any number of restaurants in any number of cities in the United States and if you’ve been to enough that work this genre of contemporary American cuisine you could probably predict the contours of 85% of the menu without even looking at it. I’ll expand on this below but first let me show you pictures of what we ate (there were four of us; two of whom had been there at least twice before).

As always, please click on an image below to launch a larger slideshow with captions. 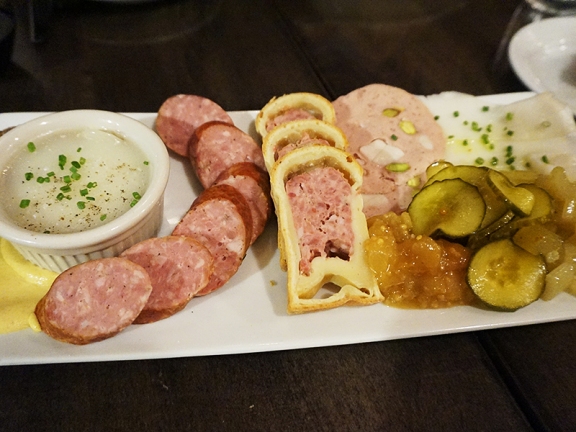 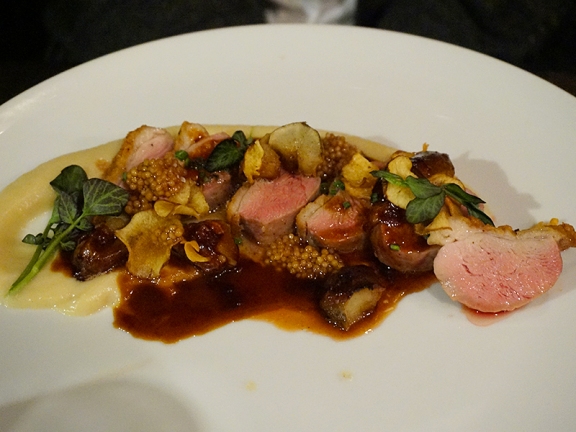 The four of us got the charcuterie plate to share to start; we then split two pastas among the four of us and then got a main each (two of us splitting the cote de bouef for two). As a result I got a pretty big taste of every dish. Herewith my evaluations:

1. Charcuterie plate: This featured a very nice duck liver pate (the consensus favourite), knockwurst (which was knockwurst), a pretty good pate en croute, not very interesting mortadella and very nice lardo, with a couple of types of mustard, a very good mostarda and pickled veg (of which the pickled celery was a standout and the pickled cucumber was not). Of the breads served alongside, a sauerkraut-infused cracker-like thing was interesting and good.

2. Corzetti with oxtail ragu, sage and sarvecchio cheese: This was quite good. The pasta was perfectly cooked and the sauce was wonderfully balanced.

3. Gnocchi with leek and gruyere fondue, jambon royale and bitter greens. The sauce was very nice; it included maitake mushrooms which brought an earthy counterpoint to the richer flavours and the bitter greens cut through it all nicely. The gnocchi themselves were, however, nothing to write home about: denser than I would have liked coming out of what is supposed to be one of the better kitchens in the Cities.

4. Roasted ham wrapped monkfish with pimentón and fennel risotto. But I had more complaints about this, which was my main. The fish itself was perfectly cooked as was the rice in the risotto. So what’s my complaint? My complaint is about the flavour of the risotto: I’m sure they used the finest pimenton they could find but the risotto had a bell peppery flavour that one of our friends described quite accurately as being reminiscent of cafetaria food. It also played up hell with the glass of wine I’d got to go with the fish.

5. Roasted duck breast with parsnip, sunchoke,  black garlic sauce. This was cooked very well and unlike the monkfish everything on the plate worked very well together. That said, the duck was not particularly ducky. Our server actually billed this as a feature—“our duck is not very gamy”—and if that appeals then you won’t have any complaints; and to be fair, this is true of almost all duck served in the city.

6. Cote de bouef for two. The missus split this with one of our friends. It was served with roasted fingerling potatoes tossed in a nice aioli and a pretty good bordelaise. It was billed as a 40 ounce steak but a pretty big part of that was one gigantic chunk of fat. Still, rather a large amount of meat and a better ribeye than you can get at most butchers (this was from Peterson’s family farm and presumably available directly from them). It was asked for medium-rare and probably ended up closer to the medium end of the continuum. With a large bone-in steak of this kind it would probably be better if they sliced it so as to keep the bone from continuing to cook the meat, but I guess they want to display the 40 ounces. It was a pretty good steak but nothing amazing. The potatoes, however, were great.

The dessert options didn’t look enticing and so we passed. All of this plus a bottle of wine (an affordable but very good Monastrell) plus three more glasses, tax and tip came to about $75/head, which (if you are willing to overlook that fact that I paid the same for my dinner at Joe Beef) is not bad as meals at restaurants of this reputation go in the Twin Cities. The problem, though, as I said earlier, is that while more than competent (on the whole) the meal was rather anonymous. I got no sense of the kitchen’s identity from either the way the menu was put together or the way what we ate was executed. You can file this under “first world problems”* if you like but at this price, and at this place’s local reputation, I would like a better sense of the chef’s vision. And I don’t need the high modernism of Piccolo or the chemistry set theater of Travail to get that either: Alma’s cooking displays it, and so does Brasserie Zentral’s.

Then again, perhaps it’s the billing that set my expectations too high. It’s listed, for example, in MSP Magazine’s recent controversial list of the 12 best and most innovative restaurants in the cities, but if our meal was representative (and our friends, who’ve been there two or three times before, seemed to think it was) it’s probably best to cap the list at a lower number. It’s a nice space and the service/atmosphere is affable and warm but there was nothing interesting happening here. With adjusted expectations and a lower tab this may have been more satisfying.

*And speaking of first world problems I also encountered another of my pet peeves here: butter that was too cold and hard to be spread easily on the very good bread.