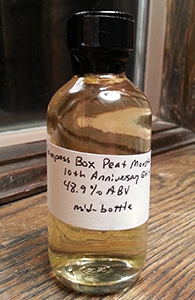 This review commemorates the 2nd anniversary of the release of the 10th anniversary edition of Compass Box’s Peat Monster. The regular peat monster is a bit of a misnomer as it’s not really much of a peat monster—it’s certainly not in Ardbeg Supernova or Port Charlotte or Octomore territory. Nonetheless, it’s quite beloved of whisky geeks. As I’ve noted before, I’m never sure how much of the love thrown Compass Box’s way is on the merits of what they bottle and how much a mix of a love of the idea of Compass Box and/or an appreciation of their laudable transparency about their recipes and processes (at least until the Scotch Whisky Association recently slammed them for it)—I’m sure the bespoke packaging and quirky names help too (as does the fact that John Glaser seems like a very genial gent).

Anyway, my hit rate with them is not as good as their reputation would suggest. I did not care for the widely loved Hedonism and thought Great King Street was just okay; I did like Eleuthera though. Calibrate your opinion of my review of this one accordingly.

The Compass Box website says this is a mix of Islay whisky from the south shore (probably Laphroaig) plus some from the town of Port Askaig (so either Caol Ila or Bunnahabhain), peated Highland whisky (probably Ardmore) and fruity malt from the town of Brora (so Clynelish).

Nose: A big wallop of peat, phenolic and coastal (salt, sea shells etc.). Some vanilla after a couple of beats. The salt gets quite intense and is joined by some lime zest and a bit of chalk and then a bit of pepper as well. With a lot more time the peat gets more earthy than medicinal. Water brings the phenols out again.

Palate: Pretty much as promised by the nose as well but then there’s quite a bit of sweetness and far less of the citrus. The smoke is sootier here too. With more time the vanilla shows up here as well and there’s a slightly musky fruitiness. More integrated with water (and more reminiscent of Caol Ila).

Finish: Long. The sooty smoke keeps going and going. Not much change with water (maybe a bit of the musky fruit).

Comments: This is very nice but frankly I’d have a hard time picking it over the Laphroaig 10, Ardbeg 10 or Caol Ila 12 if I were looking for a simple peat blast—which is what this amounts to: it’s put together very well but there’s no real complexity here or anything you can’t get from less fussy OB bottles. And as it went on the highland peat seemed to trump the Islay peat and that made it less appealing to me.