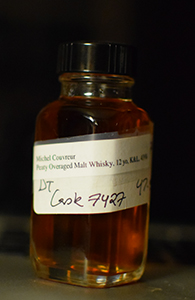 As per the interwebs, Michel Couvreur was a Belgian involved originally in the wine trade who at some point turned his attention to Scotch whisky. Unlike the average independent bottler, however, Couvreur was not interested in purchasing and bottling matured casks under his own name. Instead he apparently would purchase casks of new make, fill them into his own barrels and set them out to age in his own cellars in Burgundy and usually (if not always) vat/blend the results. If you’ve familiarized yourself with the laws governing the production of Scotch whisky you know that to be called Scotch, the whisky has to be both distilled and matured in Scotland. Therefore, even though Couvreur’s whiskies all originate (presumably) in Scotland they cannot be called Scotch. And the scale of production takes this far beyond the level of a hobbyist’s noodling. Couvreur passed away in 2013 but his methods and brand have been kept alive by his apprentices.

There are many who were/are sceptical of Couvreur’s philosophies of whisky production (including, apparently, the insistence that the distillery of origin is meaningless and that everything comes down to the wood), and there are also many who are taken by his original approaches. As always with this sort of a thing, it’s hard to know how much of the resistance has to do with one’s investment in tradition and how much of the enthusiasm has to do with the romantic notion of a maverick Belgian maturing and bottling whisky in the side of a hill in Burgundy—you can probably guess where the good folk of K&L (who released this whisky) fall on the spectrum.

As to whether these notions can be separated out while tasting “the thing itself”, it’s hard to say. But here’s my take anyway on this thing itself: a 12 yo peaty whisky (a malt whisky, but not a single malt whisky). The “overaged” part is apparently a rendering of the “hors d’age” appellation found in many French brandies.

Michel Couvreur 12, Peaty Overaged Malt Whisky (43%; for K&L; from a sample from a friend)

Nose: Faintly rubbery peat, oak and some acidic notes. Ashier smoke as it sits and some citronella and some indistinct fruity sweetness. Not much change with time. With water, the rubber seems to get a bit stronger.

Palate: Leads with the smoke and it’s not rubbery here at all. More sherry here. On the second sip there’s some burnt rope and more tarry notes. Decent mouthfeel and good depth of flavour. As it sits some sharper notes of gunpowder emerge but nothing too overpowering. Not much change after that—let’s see what water does: hmm it just thins it out and makes the smoke sharper.

Finish: Long. The smoke goes on and gets more tarry. Quite a bit of salt too. With time the sharper notes continue into the finish.

Comments: Not sure what this is supposed to be but it tastes like peated Bunnahabhain. Good, solid peated whisky of its style but nothing out of the ordinary. If the story of how these whiskies are put together are true then it would appear, based on this evidence, that they’ve managed to recreate unremarkable whiskies that others put out by entirely conventional means. It’s better than the last Bunnahabhain 12 I had but I don’t know that I’d want to pay very much more for this than I paid for that.

Thanks to Sku for the sample! (Here is his review.)