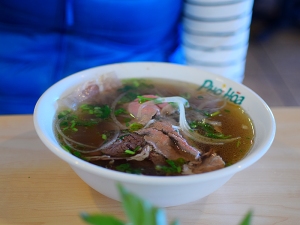 A few weeks ago I started what I described as a slow-motion survey of noodle soup-centered meals in the Twin Cities metro area. My first report was of lunch at Pho 79 on Nicollet Avenue in Minneapolis. I’m not going very far from it for the second. Pho Hoa is almost across the street from it. Unlike Pho 79, Pho Hoa is part of a larger chain—it’s the local franchise of an operation that extends not just to California, Florida, Massachusetts, North Carolina, Washington and Utah, but beyond the U.S. to Canada, Indonesia, Korea, Malaysia, the Philippines and Taiwan. Also unlike Pho 79, it is in a large strip mall’ish complex and as such has ample parking in front—which makes it far less of a pain to get to than Pho 79. That in itself would not be a reason to eat there if the food was not good but I’m happy to report that our one lunch there was quite good.

It’s also a larger, brighter and less cramped space than Pho 79. The dining room has two sections with slightly different decor—one side is a bit glitzier than the other. It was less busy than Pho 79 had been when we ate there. This may, of course, have something to do with Pho 79’s conjoined existence with Caravelle and its American Chinese menu and lunch buffet. At Pho Hoa the focus is very much on pho and bun and rice bowls and such.

We started with two orders of rolls, one with shrimp and pork (served with a peanut sauce) and the other with minced pork with pork skin (served with a sweet and sour dipping sauce). Both were good examples of their genre. The missus got the pho with steak, flank, tripe and tendon. This was very good—the broth was better than at Pho 79 and the quality of the meat was superior, in particular the tendon. I was again looking for bun bo hue and the closest I could see to it on the menu was something listed as “Hot and Spicy Lemongrass Noodle Soup”. I asked our server if this was the bun bo hue and her response was that it was the bun bo hue broth with pho meat. I gave it a go and both liked it and was a little disappointed. I liked it because it tasted good but I was disappointed because it didn’t really seem like bun bo hue—there was no trace of the lemongrass that I could detect and it was altogether less earthy than the bun bo hue I enjoyed at Pho 79. In fact, it tasted like their regular pho broth had just been spiked with a lot of chilli oil. As a spicy noodle soup, however, it was quite good; and, as in the pho, the meats (brisket and other beef) were done well.

The main website, by the way, notes that they specialize in a healthier version of pho made not with bones with fatty marrow but entirely as a meat broth. I’m not sure if this practice is strictly followed at all their locations but I must say we didn’t think their broth tasted like it was of a different kind than others. 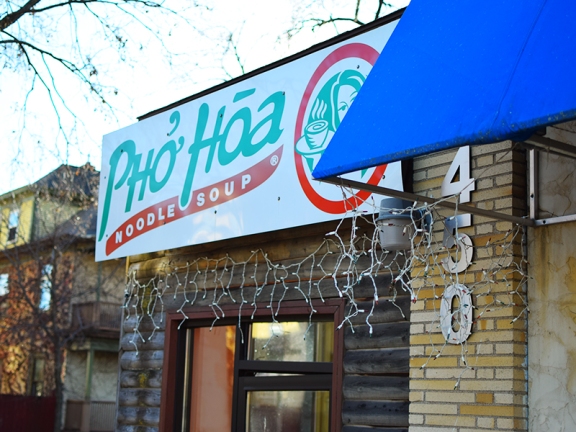 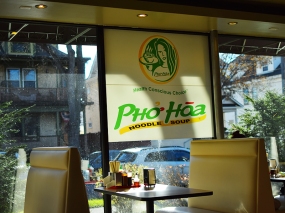 I guess they put the sign on the inside as well in case you forget where you are. 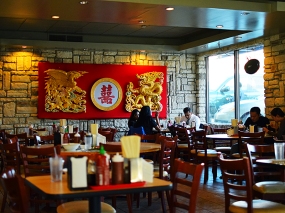 The glitzier part of the interior. 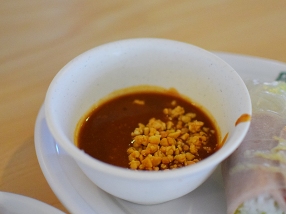 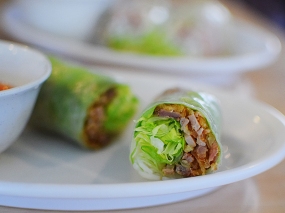 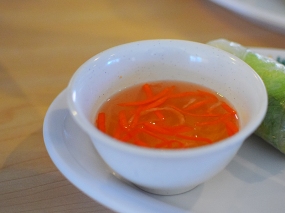 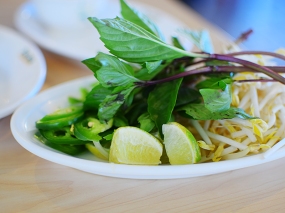 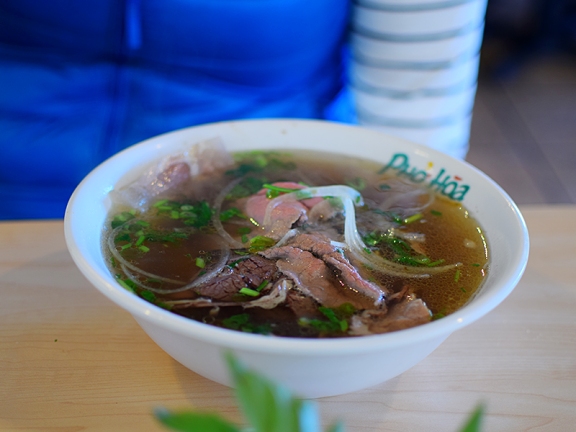 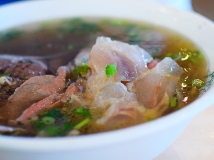 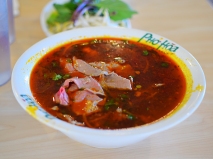 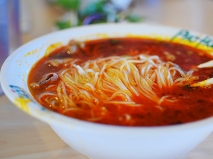 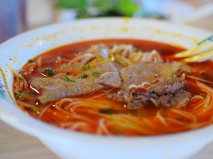 The soups, by the way, can be got in either regular or large portions—the regular is plenty large. And in a plus for eating with kids, they also have kid-sized servings of pho.

There’s not a lot else to say or larger claims to be made. It’s a casual place for casual food. The prices are low (comparable to Pho 79) and service is serviceable. Unless you have great allegiance to Pho 79 or Quang, further down Nicollet, or you’re specifically looking for bun bo hue, I’d say there’s no reason to pass by Pho Hoa—and its spacious parking lot is certainly much easier to navigate than those of either of those other, more established luminaries.

For the next installment of the pho chronicles I might skip across to University Ave. in St. Paul. I will come back later to Nicollet, to Quang and Pho Tau Bay. And, of course, my noodle soup survey is not going to be restricted to just Vietnamese food either.