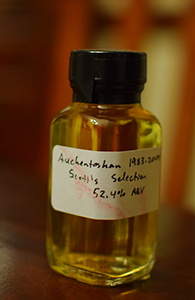 This Auchentoshan is one of several Scott’s Selection releases from the mid-2000s. While the Longmorns and Glen Grants and the Port Ellens released around the same time have long disappeared—and are now commanding massive premiums on the secondary market—and the Linlithgows, Glen Mhors and Highland Parks have also now mostly been purchased, this and some others continue to languish on shelves around the country. Even as I type, at least three whisky geeks in different parts of the country are looking at bottles of Scott’s Selection Auchentoshan, Bunnahabhain. Glenlivet, Benromach, Craigellachie and Mannochmore in specialist stores and are wondering whether to give in to the temptation to buy them. In a couple of minutes they will decide against the purchase because there’s no information out there on the quality of these bottles. That was me for many years. But then Binny’s recently put a number of these stragglers on major sale and four of us split a bottle each of this Auchentoshan, a Bunnahabhain 1988-2004 and a Glenlivet 1977-2004—Michael K. and Jordan D. will probably review their portions at some point soon (the deplorable, blog-less Florin was the fourth). As I’ve reviewed very few Auchentoshans of any kind I decided to start with this one—I’ll review the other two later this month (or maybe next) as well.

Nose: Lemon, aspirin, a bit of plastic: basically a mix of citrus and mineral notes. As it sits the mineral notes dominate the citrus at first. Then some tart-sweet apple emerges and there’s some citronella too; a little chalky too now. Water makes it chalkier still.

Palate: Much sweeter to start than the nose indicated and much maltier. That mineral/aspirin note is quite strong as I swallow. Tastes hotter than the abv would imply. The sweetness gets a bit much with time—it’s sort of simple syrup-ish. With water that malty note moves in the direction of wet wool; the sweetness backs off at first but then comes back strong again.

Finish: Long. The citrus and malt hang out for a while and it all gets quite peppery as it goes. With water the citrus pops out again and there’s some cocoa at the very end.

Comments: This is interesting but nothing about it particularly rocked my boat—and it got a little too sweet on the palate. Still, it’s no generic whisky. My guess is that those who like Irish whiskies a lot will probably like this more than I did. I preferred it with water.