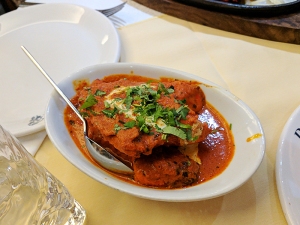 Here’s my fourth review in a row of an Indian restaurant in London. After south Indian meals at Quilon and Malabar Junction and two rounds of the Cinnamon Club‘s take on contemporary pan-Indian cooking, here now is a meal featuring the north Indian food that most people outside India think of when they think of Indian restaurants. Yes, my friends, we’re at a classic curry house this week: Punjab. Located in the Seven Dials area, at the border of Bloomsbury and Covent Garden, Punjab is not, however, merely another curry house: established in 1946, and at the current location since 1951, it pre-dates iconic places like Tayyabs (opened in 1972) and Lahore Kebab House (a similar vintage); indeed, it claims to be the oldest north Indian restaurant in the UK. We walked by it after an outing at the British Museum a couple of weeks ago, and remembering a friend’s recommendation of it as a solid place, we decided to stop in. You’ll never believe what happened next!

Well, not much really. After ascertaining the size of our group they led us to a table and handed us menus; we perused the menu and ordered our food and when it arrived we ate it.

And the food was mostly pretty good as this kind of thing goes. I’ve noted before that the gap between mediocre curry house fare and very good curry house fare is not terribly wide, but most things here tended more towards the good than the mediocre end of the spectrum. The major weakness was the tandoor work. The tandoori chicken was well-tenderized and marinated but indifferently cooked (I wouldn’t swear based on the char and aroma that it had actually been cooked in a tandoor, though I’m sure it had); the seekh kabab, which I unaccountably failed to photograph, was just ordinary (which is to say I would have been thrilled to receive it at most Indian places in the US); and the naans were mediocre. The curries, however, were pretty good. The butter chicken was indistinguishable in the main from what you would get in places of similar ambitions in Delhi (and I was pleased to see that the chicken was only available on the bone), the tangy achari gosht was tasty as well and the kali dal was quite good. The one misfire was the Amritsari chhole, which would have been very good if not rendered inedibly salty. And speaking of Amritsar, the starter of Amritsari fish (marinated, battered and fried fillets) was rather good indeed.

It may be, however, that I liked the feel of the restaurant almost more than the food itself. As with many more-lauded and more recently-opened Indian restaurants, Punjab has a kitschy interior. I’m not sure if it’s always been like this or if there was a more recent re-design but it’s done quite well—if you like this sort of thing. And there’s some whimsy on the menu as well, with various unreliable tidbits at the headers of the various sections. See, for example, this bit before the lamb section:

“This is what the Punjabi women give their menfolk when they want to be strong enough to perform with gusto. So men, please watch it. Ladies, watch out.”

Between the Hindi film music playing (not too loudly) in the background (a huge upgrade from the smooth jazz at Malabar Junction) and the strong Punjabi accents of the staff, I felt quite at home. This is the first Indian restaurant I’ve eaten at in London, by the way, that seems to be staffed entirely by recently arrived Indians—I note this merely in passing; it may well be an unremarkable phenomenon.

Here now are the requisite pictures of the space and the food. Please scroll down for comments on the overall experience and the value. 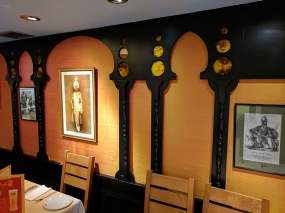 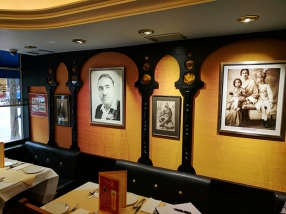 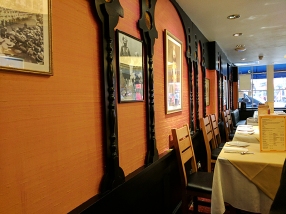 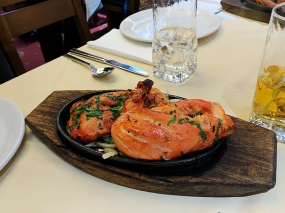 Proof that there actually is lamb in there.

Grandad knew what he was doing.

Though I don’t think he’d have been happy with how much salt they put in this.

Not terrible but a little too doughy.

A note on the inedibly salty chickpeas: I didn’t get around to tasting it till we were well into the meal and so it didn’t seem worth asking them to replace it. However, after I drew it to our waiter’s attention he took it away, had a little taste, agreed readily that it was unacceptable and had it taken off the bill even though some of the less-discriminating members of our party had eaten about half of it, mixed in with a lot of rice. So, that was nice, and service was quite friendly on the whole. Speaking of the bill, it was not very high. There were seven of us eating and we probably came in at £15-18/head. That’s with multiple orders of some of the dishes and some soft drinks. We were too full for dessert.

So, would I recommend it? Yes. I wouldn’t suggest anyone go out of their way to eat here but if in the vicinity it’s a plausible stop. I would probably pick it over Malabar Junction if I wanted to combine the British Museum with Indian food again.

Coming up soon: more Indian food and more curry house fare as well. And we’re going to step out of London too. There’ll be a report on an Indian meal in Brighton and on two meals in Delhi (I had to make an unexpected side-trip recently). And we’re scheduled to eat at the aforementioned Lahore Kebab House in Whitechapel today.