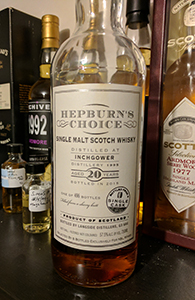 I have been accused before of reviewing too many long-gone bottles that were never released in the US to begin with. Accordingly, here is a review of a bottle that was a US exclusive and which is no longer available. You’re welcome!

This Inchgower was selected by K&L in California and was released last year (I think). I don’t really put much stock by K&L’s reviews of their own bottles. Driscoll’s notes on Spirits Journal contain a lot of words that are often used to describe whisky but they very rarely seem to describe the specific whisky he is flogging. I’ve been burned once too often by what seemed like good values based on his gushing. These days, therefore, I wait till trustworthy sources report on bottles they’ve purchased. If this means I miss on the occasional quality bottle which sells out before I get a positive report I trust, so be it. Anyway, in this case the positive report I trust came from Michael K. at Diving for Pearls. Michael really liked it. I opened my bottle a few months ago for one of my local group’s tastings but have only just gotten around to reviewing it*.

Nose: Gets off to a classic sherried start with prunes, apricot and orange peel; there’s some ripe plantain below as well. After some time/air there’s cocoa and coffee grounds. With more time still the citrus expands (more lemon than orange now) but there’s also a faint metallic tinge and then an organic note (dried leaves?). Fruitier still with water and there’s a pastry crust thing happening now too.

Palate: Hits with a combination of the orange peel and more bitter oak notes; some cracked black pepper as well. With more time the citrus gets the upper hand on the oak and some of that cocoa from the nose shows up here too; unfortunately, so does that faint metallic thing. Brighter and sharper with water and the metallic thing expands a bit.

Finish: Long. The bitter oak and fruit fade out together. There’s a vaguely tropical accent to the fruit here—a bit of papaya. With time the bitter notes transition from oak to dark chocolate and the fruit gets richer. Water knocks the bitter notes out almost completely but the metallic thing lasts longer now.

Comments: This is very nice indeed. Just a little less of the oak on the palate and a little more depth with the fruit and it would have been heading towards the next tier. Should have bought a second bottle.

*These notes were written more than a month ago, when I was still in Minnesota.