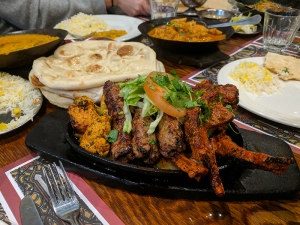 A few weeks ago I reviewed a meal at Lahore Kebab House, the iconic Pakistani Whitechapel curry house established in 1972. Here now is a write-up of lunch at their even more iconic contemporary and near-neighbour, Tayyabs, also established in 1972. I noted in my review of Lahore Kebab House that there seemed to be a pattern to the recommendations for one or the other: while both are very popular, I seemed to get more recommendations for Lahore Kebab House from South Asian friends and come across more raves for Tayyabs on food blogs and forums populated largely by non-South Asian foodies. Nonetheless, I said at the time of the first review, published on the morning of the day I ate at Tayyabs, that I expected the differences between the two kitchens would be negligible with preferences for one or the other down to loyalty. This would certainly seem to be indicated by their menus—which are both abbreviated (as curry houses go) and more or less identical. As it turned out, however, I thought my meal at Lahore Kebab House was clearly better than this similar meal at Tayyabs, and I much preferred the spartan mess halls charms of Lahore Kebab House to Tayyabs’ interiors.

A quick word about that interior. This was my first-ever meal at Tayyabs and so I obviously cannot speak to what it looked like in earlier incarnations. My understanding is that the current version stems from a major expansion a little over a decade ago—when the three outlets that had sprouted alongside over the years were consolidated with the 1972 original—and renovations since. I’m not sure if the original shared Lahore Kebab House’s spare aesthetic but the current version is altogether shinier. Now, I don’t object to shiny interiors per se and nor do I fetishize spartan dining rooms, but Tayyabs’ shiny interior features a little too much gold for my taste and the bright lights reflecting off all that gold strain the eyes somewhat. Whatever it was like before, it’s a bit garish now and it also looks like a standard-issue curry house.

None of this puts very many people off. It’s apparently still a madhouse outside on the weekends and for dinner most nights. We, however, were there for lunch on a Tuesday and while the restaurant was still busy it was far from full. There were eight of us (though the check says seven for some reason) and we did not have a reservation but we were seated right away—there was one entire large dining room that was completely empty. Service was somewhat chaotic anyway—it must be even more frantic when they’re full packed. However, I did not find the service to be rude or brusque as some people note online. Perhaps because I was chatting away in Bengali with our server—he said about 30% of the staff are Bangladeshi—we were treated very nicely and randomly comped some small things (see below).

For pictures of the food see below. Scroll down for my thoughts on value etc.

Though you can’t tell from this photograph, they take up a large part of the block they’re on.

Most of the ground floor dining space is to the left of the entrance.

There’s another to the right. 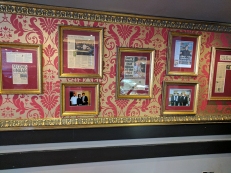 As you wait for your table you can pass your eyes over some of the high praise they’ve received over the years.

You can also ponder the purchase of samosas…

The look of the place is a far cry from Lahore Kebab House.

Leading to the kitchen.

We were seated in the smaller dining room in the middle.

This room mostly filled up over the course of our meal. Groups from local businesses seem to make up a fair share of their weekend lunch business. 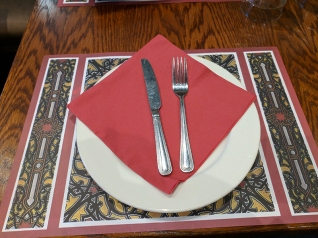 I guess you’re successful when you can make people pay for bottles of water with your name on them.

The kababs and lamb chops were served together. 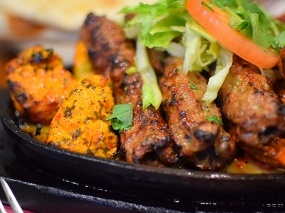 A closer look at the chicken tikka and mutton seekhs.

Unfortunately, I don’t have decent shots of the lamb chops. 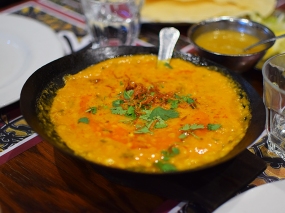 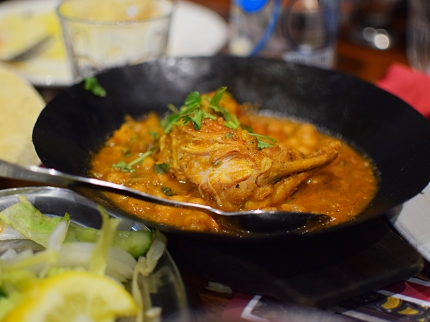 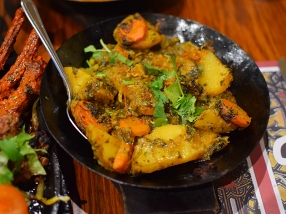 Another crappy picture but a very tasty dish. 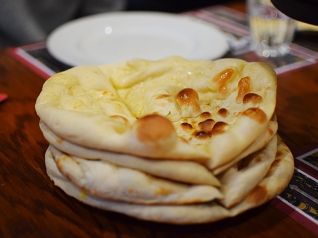 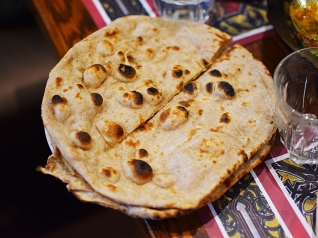 As I said, service, though friendly, was a little ragged—in addition to the mis-delivered garlic naan there was also another large platter of kababs that came to us by mistake (those got whisked away before any of us could dig in), and it took a good while for our food to arrive. As such I appreciated that they comped us one of the chicken tikkas and also didn’t charge us for a number of bottles of their branded (!) water. And the price on the whole was very reasonable. We paid £17 per head all-in and took some food home.

As for the food, looking at my descriptions now I realize they might read like I was ho-hum about everything. I should clarify that I liked everything; if I could get this quality of cooking at South Asian places in the US I’d be very happy. It may be the case that my expectations were too high based both on all the talk about Tayyabs and also on how much I liked the food at Lahore Kebab House. However, nothing here rose to the heights of the best dishes at that meal—the mutton tikka, the saag gosht, the dry lamb curry. It’s possible, of course, that Tayyabs’ renditions of those dishes are as good or better; it’s also true that these were both single meal samples. Still, based on what I ate at both meals I can’t recommend Tayyabs over Lahore Kebab House, and that without even factoring in the likely greater difficulty of getting into Tayyabs at busy times.

Well, our time in London is almost up—we’re off to Scotland for a bit in the middle of next week and then we’ll back in Minnesota in the second half of the month. I still have a lot of food reports from London left to write, however: there are quite a few Indian meals left to report (from curry houses to a Michelin starrer) as well as a number of others (Thai, Malaysian, Peruvian, Spanish and even Italian). So you can expect the London restaurant reports to continue for a while. And while I’m not sure what our eating out in Scotland will be like you can certainly expect a few distillery reports—which reminds me, I need to book my tours! Also, to commemorate my first-ever visit to Scotland I’ll be posting whisky reviews more frequently over the next two weeks than I have been doing since February.