I said in my review of meals at Smoking Goat, the hip and casual Thai restaurant in Bloomsbury, that it’s not the kind of place where you should expect tom yum or drunken noodles or large bowls of curry. Thai Square, however, is. It’s a chain with a large number of locations in London (though very far from the ubiquity of Itsu) and they all serve fairly mainstream Thai food. Having walked by a number of their locations over our first few weeks in London, we finally succumbed to our curiosity on leaving the V&A at lunch time one Friday and seeing their South Kensington location close at hand. Herewith the details.

Their website will tell you that they have “real Thai chefs” preparing “authentic ingredients flown in daily” (from Thailand, presumably) and when you step into the restaurants you’ll see that they’ve taken some pains with the decor—which is said to be inspired by Thai temples. The interiors are quite a step up from Thai restaurants of similar culinary ambitions in major American cities. The food, too, I would say, based on our one meal, is a bit better. This is due, I suspect, not to the allegedly daily flown-in ingredients, but simply to the fact that Londoners, perhaps conditioned by decades of eating Indian food, have a higher heat default and don’t seem to want their Thai food to be diabetes-inducing. And so, even if there aren’t any esoteric surprises on the menu, the food was all tasty enough.

What did we eat? We were with a mid-sized group and so ordered doubles of a number of things. Descriptions and brief evaluations are in the captions to the slideshow below. Please launch it to take a look and scroll down for comments on the overall experience, service and cost. 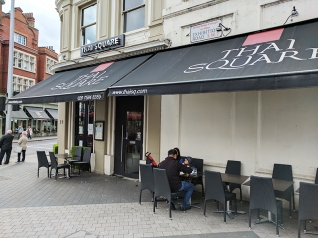 A hop, skip and a jump from the V&A and the Natural History Museum. 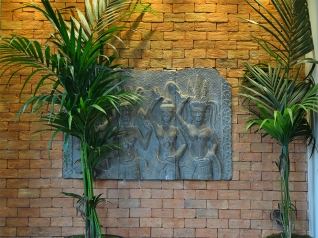 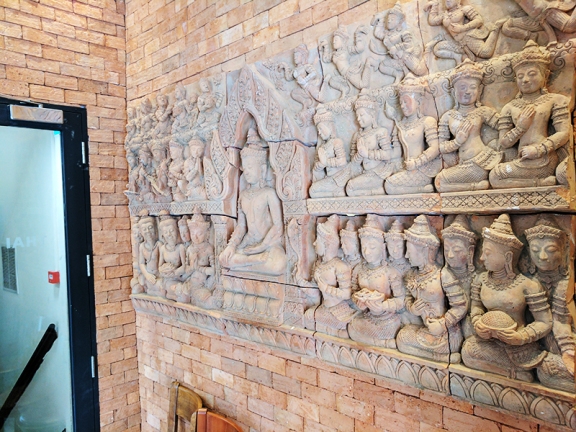 This was quite good. 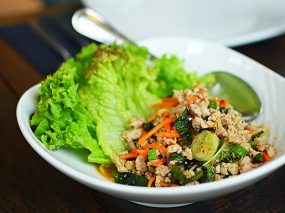 Also quite good if not particularly fish saucey.

The inevitable chicken satay for the brats.

Much better than the default green curry at analogous places in the US.

This was just okay; not particularly hot. 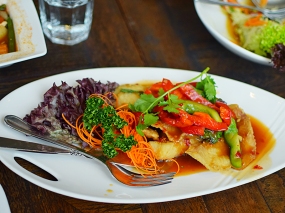 From the “Chef’s Recommended Dishes” section of the menu, this was okay.

Made with assorted seafood, this was decent.

The Trafalagar Square branch, passed on the way to Berry Bros. & Rudd.

The restaurant seemed to be mostly filled with local office workers on their lunch breaks. It was busy but service was pretty good. It’s possible that this—and the proper heat level on the dishes asked for as Thai hot—was due to some degree to the fact that there were two native Thai speakers in our group, but then again it might not be so. At any rate, our servers were helpful and attentive. Prices were on par with Indian restaurants of similar ambition (I did not save the receipt but you can get a sense from their website of what a likely tariff would be).

We didn’t go back ourselves but if I lived in London and had the occasional hankering for a decent Thai meal that I didn’t need to plan for, I wouldn’t turn my nose up at Thai Square. If you’re there for a short visit, I don’t think there’s any good reason to eat at a Thai Square location if your itinerary is food-focused. But if you’re looking for a reliable meal within reach of tourist spots and you pass by a Thai Square location, you could do far worse. That said, there’s far better South Asian and even Malaysian and Sichuan food in London in similar price brackets (and lower) and I’d probably suggest something in those genres first.

Next up, more Thai food, but in a different city.