Dim sum (traditional or modernist) is not the only non-Indian/South Asian food we’ve been eating in London—though it may be hard to tell this from the reviews I’ve posted so far. In fact, the restaurant we’ve eaten at most often is neither Indian nor Chinese (though it is located in Chinatown): it is C&R, a Malaysian restaurant located on Rupert Court, a comically narrow alley that connects Wardour Street (one of the principal Chinatown roads) with Rupert Street, which is in the borderlands between Chinatown and Soho. We’ve eaten there four times in the last two months. Malaysian food is sort of the sweet spot for us as a family: take Indian, Thai and Chinese flavours and ingredients and put them in a blender and Malaysian food is what will come out. And it offers a number of things our boys happily scarf up: between the satays, the Hainanese chicken rice, the parathas, and various noodle soups, I’m not sure there’s any cuisine we like to eat that’s easier to go out to with them than Malaysian.

Unfortunately, there just isn’t very much good Malaysian food in the US. We go occasionally to Peninsula in Minneapolis and while we like some of what they do, what we like is only a small percentage of what they do (and let’s not talk of the other allegedly Malaysian restaurant in Minneapolis). And this is not just a Minnesota thing—I’m not aware of Malaysian restaurants with strong reputations in Los Angeles or New York either. A shame as I would guess that Malaysian food would be very popular with Americans who already like Thai food. I was curious if the situation would be different in London, given the fact that the tentacles of British colonialism extended to Malaya (and Singapore as it is now was established by the British). Indeed, there are more than twice as many people of Malaysian origin in the UK than in the US—the UK is second only to Australia when it comes to the Malaysian diaspora outside Asia. And if numbers and history have meant that Indian food in the UK is far superior to that in the US, surely the same must be true of Malaysian food, I thought. I’m happy to say that C&R offers strong verification for this hypothesis.

It’s a small restaurant and can get quite busy both at both lunch and dinner on weekdays Though as I say that I realize we’ve only ever been seated in their downstairs dining room—they have another dining room up the stairs as you enter, and I have no idea how large it is or whether it was filled up too on the occasions when the downstairs was slammed. The downstairs room is on the spartan side and the tables are quite close together. The only bit of decor are the symbolic murals of the London and Kuala Lumpur skylines on the longest wall. Service is likewise utilitarian—depending on who you get, your server may be slightly friendly or slightly unfriendly, and if you get food to share you’re not likely to be given plates that make that easy to do. What matters most though is that the food is consistently very good.

For more on what we’ve eaten there so far, please launch the slideshow below.

Looking out at Wardour St.

Looking out at Rupert St. 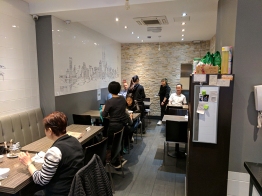 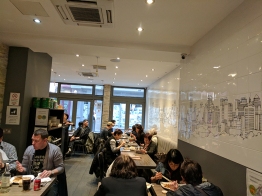 Click on the link below to view this at full size. 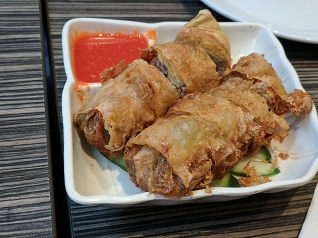 Sort of a spring roll on steroids, these are very good indeed. 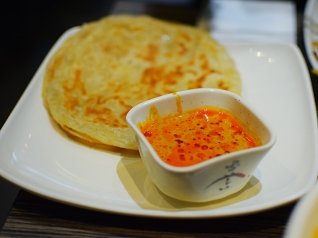 As is their roti prata. The basic version comes with a chicken curry that doesn’t have much chicken in it but the curry itself is very tasty.

And the pratas/parathas are excellent.

The rojak at Peninsula almost made us cry. This version is not quite as good as the rojaks we ate in Singapore but it’s a fair substitute.

These chicken wings in a spicy-sweet chilli sauce are very good.

As is their rendition of this classic dish.

Their mee goreng is also quite good. 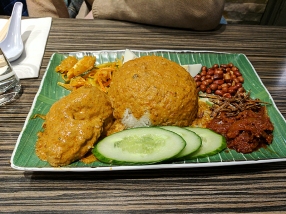 As is their nasi lemak.

Don’t tell our kids but the Hainanese chicken rice is just okay.

You can spike it and other dishes a bit with a trio of condiments from the cashier’s desk.

Very good with a rich prawn broth and the egg yolk still soft. 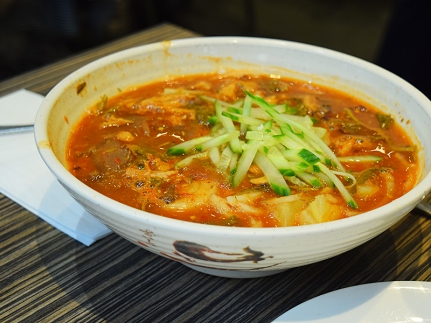 This sour (asam) laksa with fish and without coconut milk is rather good.

But it’s the richer Singapore laksa that’s more likely to appeal to most people.

This shrimp dish is somewhat meh, however. 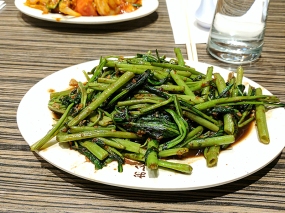 But this dish of water spinach sauteed with fermented shrimp paste is rather good indeed. It’s important to eat your greens, but this has not always been available on our visits.

Oh, the prices at C&R are pretty low by London standards. You can eat very well there for less than £10/head—if you’re on your own just get the Singapore laksa for £8.50 and be happy; it’s about 75 times as good as the crappy noodle soups you’ll pay marginally less for at the ubiquitous Itsu, which seems to have three branches on every block in the city.

As much as we enjoy eating at C&R, they’re not the only Malaysian show in town, or even in Chinatown. Not too far away from them is another place called Rasa Sayang, and we’ve enjoyed some things there even more than the versions at C&R—more on Rasa Sayang soon.