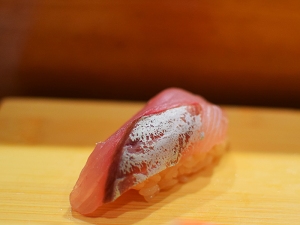 As I’ve said a number of times before, sushi is the one thing we no longer eat in Minnesota. Rather than be disappointed (at not insignificant cost) over and over again, we save our sushi dollars and get our fill on our annual trips to Los Angeles. On the last few trips this has involved a blow out dinner at Mori (see here and here). On this trip, however, going out to dinner sans the brats turned out to be a no-no and so we’ve had to pass on Mori (they stopped opening for lunch a couple of years ago). We decided instead to turn the cost of an omakase at Mori into a few more meals at mid-tier places. This is where Osawa comes in.

Located in Pasadena, Osawa is not a sushi specialist. In fact, I think they might have more of a reputation for their shabu shabu and cooked items; and on the sushi front, their claim to fame is probably more for their battera sushi. Still, based on reviews and reports, it seemed likely that their sushi would be quite a bit better than anything in the Twin Cities and so we gave it a go. It’s a large space but reservations had been recommended for the sushi bar and I’m glad we’d made them. We got there around noon and they filled up shortly thereafter with people waiting as we were leaving.

It’s an attractive restaurant—if you don’t get seated at one of the tables in the darker back-end. The long bar is divided between the shabu shabu and sushi operations. You can only get shabu shabu if you’re sitting at the designated bar (i.e no shabu shabu at tables or the sushi bar). There are induction burners for every seat there, I think I noticed. Anyway, we were getting sushi. There are only about 8-10 seats at the sushi bar and three chefs breaking down fish and preparing sushi. They have a lunch special of miso soup, eight pieces of nigiri and a handroll for $29 and we decided to each get one of those and then add some extra pieces on at the end. This was not a bad idea but it was not the best idea (more on this below).

What did the lunch special combo consist of? One piece each of:

We actually held on to the handroll for the end of the meal and added on a few extra pieces:

For pictures of the restaurant and the fish, please launch the slideshow below. Scroll down for thoughts on price/value and why the lunch sushi combo was not the best idea.

For some reason I was expecting a much smaller place. 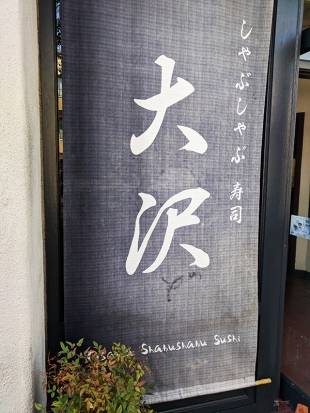 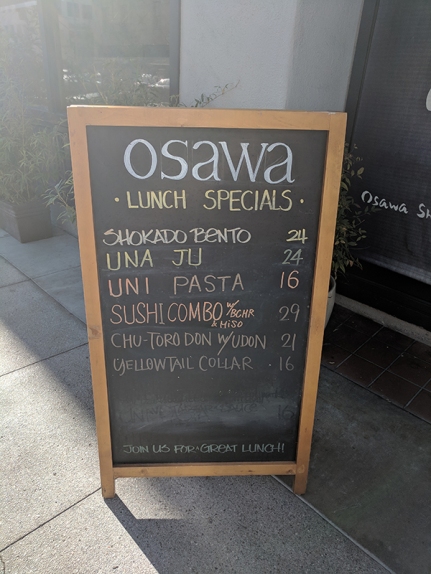 Given how busy it was you wouldn’t think they need to work hard to snag passerby, but maybe that’s why it was so busy.

We didn’t have any, unfortunately. 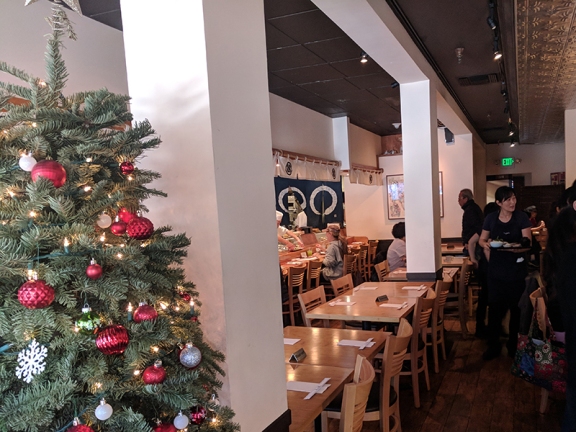 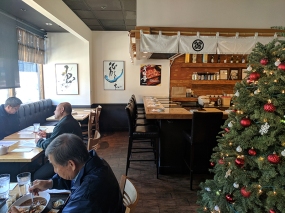 Lots of light through the windows in the front.

Less light in the back 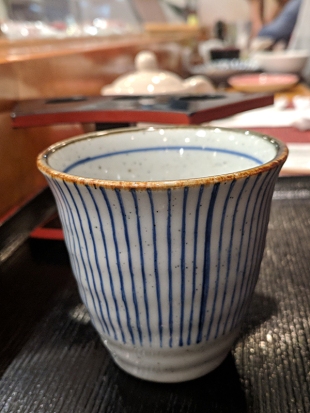 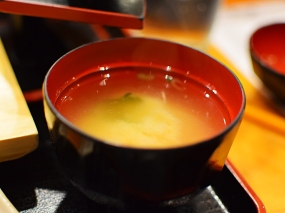 Nothing special—especially after the miso soup at Raku the previous day. 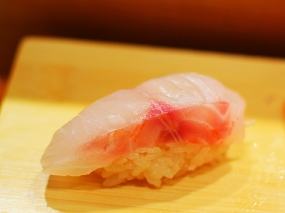 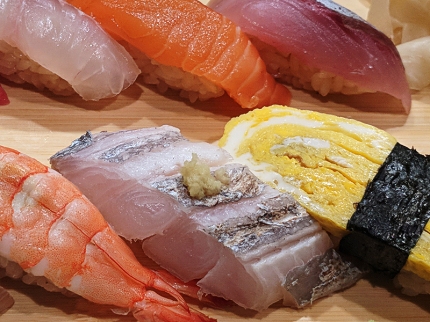 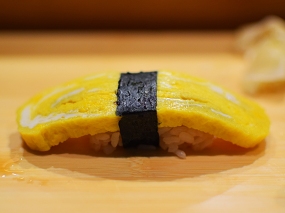 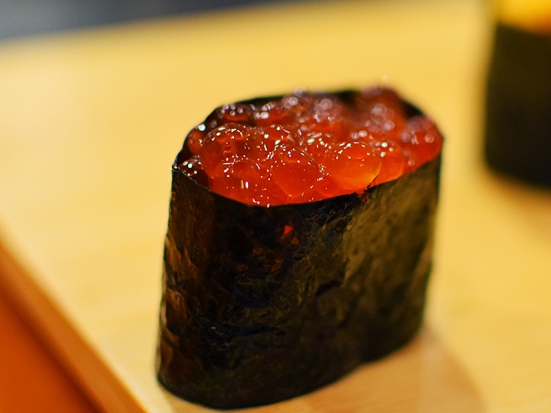 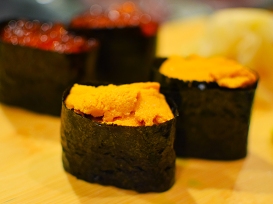 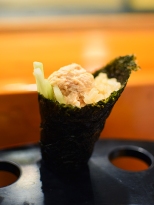 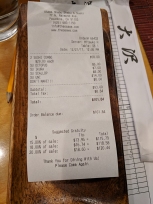 Service was fine, if a little harried with the lunch crush—it wasn’t really feasible to have a conversation with the sushi chef (and no provenance was specified for any of the fish). All of this came to about $120 with tax and tip, or just about $60/head (I add this in case you’re innumerate). That’s pretty good in the abstract for 12 pieces of nigiri, a hand roll plus miso soup—especially with a few esoteric pieces included in the combo. However, the combo included a number of things I  wouldn’t have ordered myself (the tuna, the shrimp, the tamago) plus one that I wouldn’t have known to order but didn’t actually care for too much (the ojisan). On the other hand, the belt fish and the hachibiki were enjoyable and neither was on their nigiri menu (they also have no board visible with daily special fish on it). Still, for about the same amount of money, we could have come up with 12 pieces, all of which we wanted to eat and would probably have been happier.

That said, we were happy anyway and would recommend Osawa to anyone looking for good sushi—especially in Pasadena—that doesn’t break the bank. I’d certainly recommend Osawa to anyone visiting from Minnesota—you’d pay far more for far inferior sushi anywhere in the Twin Cities. I’m curious as to what their omakase in the evening might be like but on the next trip I think we’ll try Ichi instead not too far away from them.

We’ve since had utterly pedestrian sushi in Little Tokyo, and a few hours after this review posts we’ll be heading to omakase lunch at Shiki in Beverly Hills—which will hopefully be much better. Both those reports will show up later in January. Before then I’ll have some Mexican, Korean and Chinese reports. And tomorrow I’ll have another Japanese whisky review.