Back in November I wrote up a very disappointing dim sum meal at Yangtze in St. Louis Park and ended by noting that I’d give A&L Chinese one more shot, and that if it turned out as bad as our meal at Yangtze I’d be done with dim sum in the Twin Cities metro. Accordingly, with a lot riding on it, I returned to A&L last weekend with most of the group of people who’ve been accompanying me to the Twin Cities meals I’ve recently reviewed. I’m glad to say that while the meal was nothing very special it was a lot better than the Yangtze debacle and that A&L Chinese remains the one passable option for dim sum in the area.

We weren’t actually supposed to eat there this weekend. We were supposed to go to Tapestry, the new place that’s opened in the old Mai Village location on University Ave. in St. Paul. I’d seen a notice on Eater about their opening late last year that mentioned they’d be serving dim sum as well. The day prior to our planned visit I figured I’d call them to see if we could reserve a table, and while I was unable to find a phone number, I did find a number of very negative reviews on Google and on Yelp that gave me serious pause. Yelp usually skews positive—hell, the execrable Mandarin Kitchen gets glowing reviews on Yelp—and so reports of limited, badly executed dim sum at Tapestry on Yelp were alarming. I figured it would be a good idea to give them a couple of months to figure things out. And so we ended up at A&L instead.

We were a group of seven adults—the missus was off with the boys at a chess tournament—and we did a fair amount of damage. Before I get to what we ate, a word or two about the restaurant for those who’ve never been and haven’t (unaccountably) read my previous review: yes, it’s all the way out in Inver Grove Heights. However, if you’re willing to make the trek, you’re not going to have wait forever as you will at Yangtze or Mandarin Kitchen. All things considered, you’ll save time driving to A&L and you’ll eat better. With one exception (see below), everything we ate on Saturday was better than the version served at Yangtze last fall.

However, bear in mind—as noted in my previous review—that A&L starts preparing and setting dim sum out on carts when they open. This means that if not very many people have shown up before you get there your first set of orders will likely have been sitting in a closed cart for 15-30 minutes. This will not do wonders for any of the items. The good news is that they seem to be much more popular now than when we last ate there on a few occasions in 2015. Then we were one of only three or four tables during our meals. This past Saturday, however, they were a lot busier. And given that the weather on Saturday was not excellent, I’d expect this was not an aberration. Accordingly, I’d suggest aiming to get there between 11-11.30. This will I think give you the best chance of getting things fresh from the kitchen. Certainly, the things we got in the second half of our meal—we arrived at 10.30—were, with a few exceptions, better than the things we got right after we sat down.

For what we ate, and my takes on them, launch the slideshow below. For comments on price/value and service scroll down. 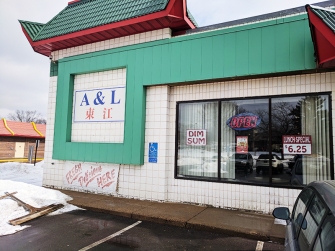 I am a bit curious about the quality of their regular menu. 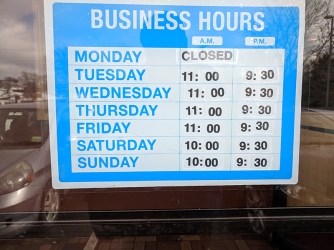 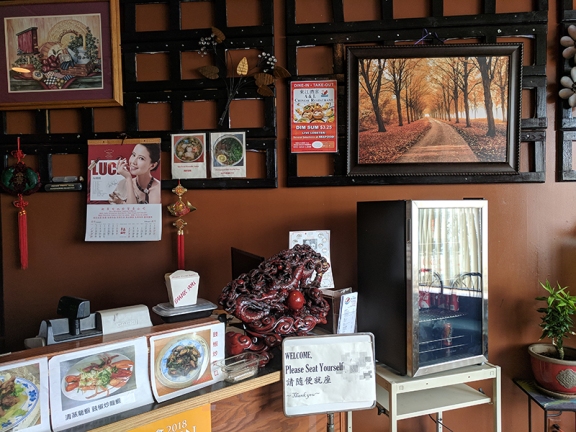 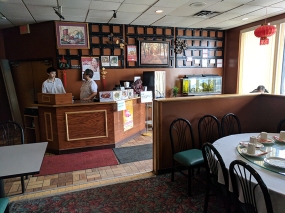 These two gentlemen were the only people in the front of the house.

Not too many people when we arrived.

These shrimp dumplings would have been quite good if they’d not been sitting in the cart for a while. 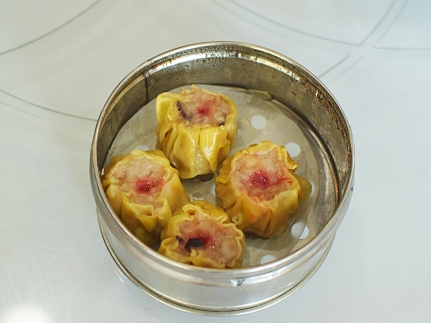 Not sure what was on top in place of the more usual roe but these were good. 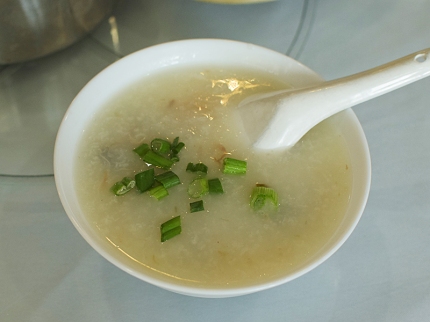 The congee, with pork and thousand year egg, was very good—perhaps my favourite thing at the meal.

The tripe was the one thing that was not good at all. Too tough and almost entirely flavour-less, this was far inferior to Yangtze’s version.

Good flavour in the filling but the skin had got too flabby in the cart. 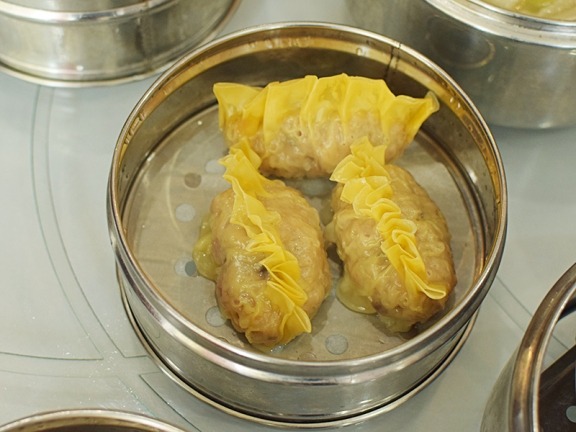 And also for these. 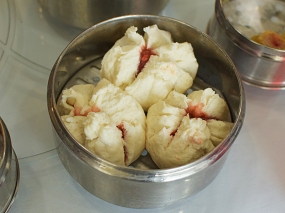 I was not a fan but some others liked them.

These pan-fried dumplings were far superior to the flabby ones we were served at Yangtze. 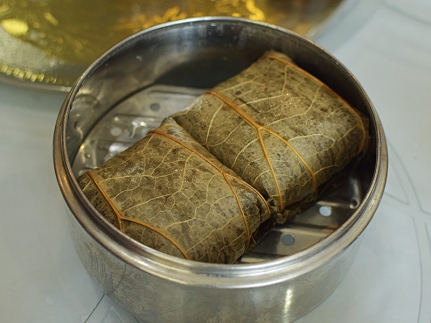 This was very good too. 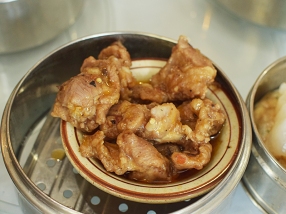 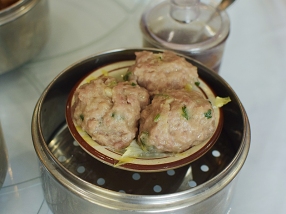 Had been sitting for a while. Still decent and possessed of an odd weed-like aroma and flavour. 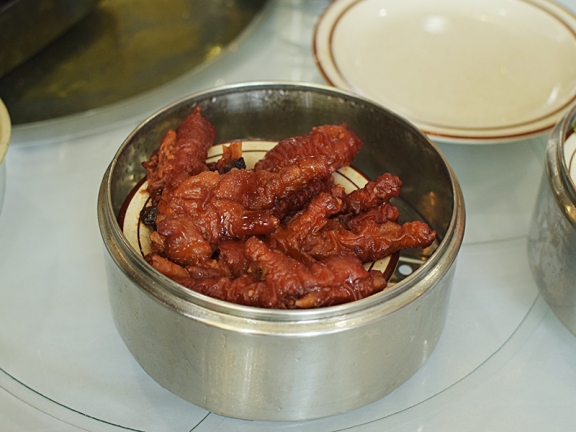 We got these fresh from the kitchen and they were pretty good. Some orange peel in the mix there. 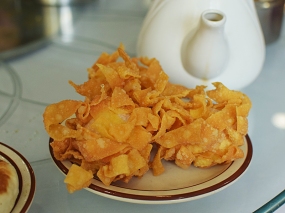 This was rather pedestrian.

We also got these fresh from the kitchen and they were very good. 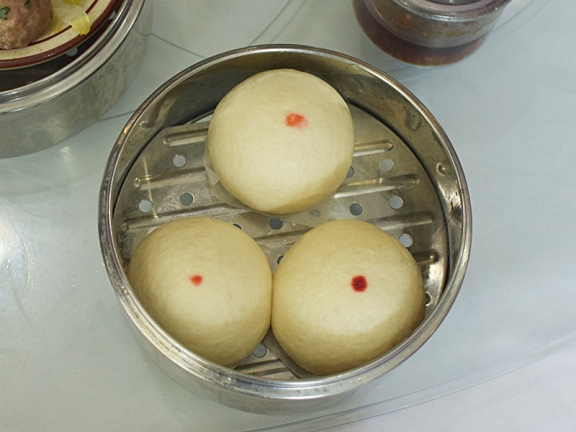 …but, alas, they were just about okay—the custard was overcooked.

All of this came to $18/head with tax and tip, and we took a few leftovers home. About as much as we paid per head at Yangtze last year but for a lot more food: every plate of dim sum at A&L costs $3.25 and we got two orders of almost everything. Now, it should be acknowledged that the variety on offer at A&L is far more limited than at Yangtze or Mandarin Kitchen; however, the quality is better. For us, it’s a no-brainer. It’s a shorter drive than to Yangtze and there’s no wait. Even with the seemingly increased popularity you’re unlikely to have trouble getting a table on the weekend. The increased popularity hasn’t done much for the service though. There were just two servers at our meal and it didn’t take long for them to get overwhelmed—and, frankly, one of them was not at risk of winning awards for attentiveness even before a lot more customers showed up.

By the way, if you go, you’ll probably see a sign on the side of the restaurant saying it’s under new management. Pay it no mind. We asked and were told that sign’s been up for five years: apparently, they still get locals who think they’re the old incarnation of the restaurant—which was apparently all-buffet—and so have not yet taken it down.

I can’t say that I liked this meal enough to want to go back there frequently for dim sum; but I liked it enough that it’ll do as an occasional stop to tide us over till our annual trips to Los Angeles. That’s not particularly high praise but it’s far more than I can say for the other options. Who knows, maybe Tapestry will find their feet and change my mind.