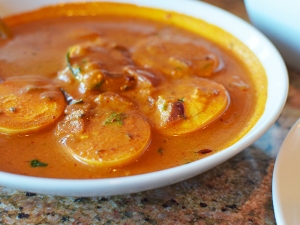 Let’s get this out of the way right off the top: House of Curry is the best South Asian restaurant in the Twin Cities metro area; and it’s not even close. Now you may say that comparing a Sri Lankan restaurant to the Twin Cities’ Indian restaurants is misguided but you’d be wrong. Sri Lankan food is closer to South Indian food—especially of Kerala and southern Tamil Nadu—than either are to North Indian food of any kind. And Sri Lankan food is also closer to North Indian food than North Indian food is to the cuisines of the states of the North East. In South Asia political geography does not always map on to cultural connections. And though the food served at House of Curry is some distance from the Bengali flavours of my own home state, it still checks most of my boxes; when I eat it I feel at home. And this makes sense also because the food at House of Curry tastes like good home cooking. If you haven’t been, you should go. And if like us at the first of the two meals covered here, you haven’t been in a couple of years you should go soon. We are happy to drive 20 minutes to Rosemount to eat there and we’d happily drive further as well. So should you.

You should know, however, not to expect any of the staples of the North Indian curry house here. There is no chicken tikka masala, no tandoori chicken, no naan, no neon-red tandoori chicken, no cream-laden palak paneer. You have to get over that. When we first ate there some months after their opening we were a little worried that the lack of these items might spell trouble for them—as they are what most people in the US still think of when they think of curry. But four years after opening, they’re still in business, still doing well—as far as we can tell—and still not serving any of these things. This is testament both to the quality of their cooking and to the willingness of the local market to try something different.

After having gone more than three years since our last meal, we’re now threatening to become regulars and so it’s really important to us that more people go out and support them.

As I said, this review covers two lunches eaten in consecutive weeks. To see what we ate at each meal and what we thought of it all, please launch the slideshow below. For comments on value and service please scroll down. 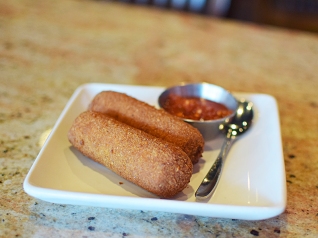 Nomenclature does differ, however. In most parts of India if you ordered a chicken roll you’d get a paratha rolled up with spicy chicken inside. The Sri Lankan roll, however, is an elongated, bread-crumbed croquette. 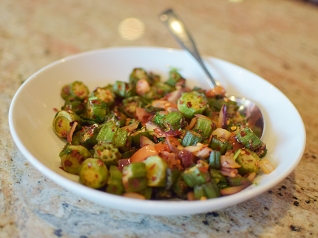 This simple stir-fry of okra is very, very good.

As is this spicy chicken curry with potatoes, tart with a good lashing of lemon juice.

This is the fish curry sans coconut milk and it’s also dynamite (and lethal at the extra hot setting). 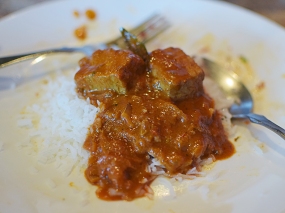 The fish in the curry is tuna—the use of tuna also separates Sri Lankan cooking from South Indian cooking,

Here begins our second lunch. This rasam was textbook and as good as any I’ve had in the better udupi restaurants in Delhi. 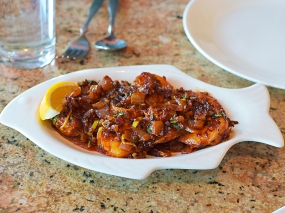 This is excellent—though best, I’d guess, if got at least hot. Six plump shrimp in a tangy/spicy/sweet sauce of tomato and onion. 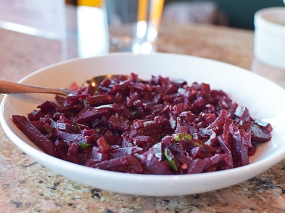 The missus preferred the okra from the first lunch but I liked this dish of cooked and stir-fried beets better. The earthy sweetness of the beets were a great match for the searing heat (of course, you don’t have to get it at the extra hot setting).

Perhaps because we got this extra hot as well, it came out redder than the menu picture might suggest but it was very good anyway. Very hot despite the mellowing effect of the coconut milk. 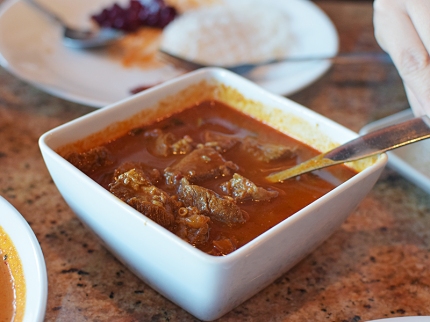 But the lamb (which was probably goat) curry was even hotter and even better. 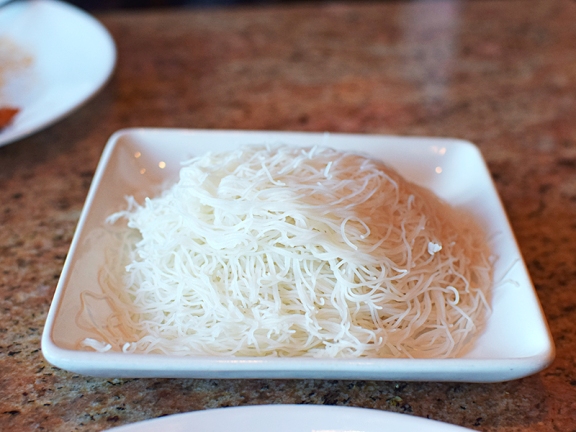 String hoppers, made with rice flour, are indistinguishable from the Malayali iddiyappam and are great for eating curries with.

They gave us some watalappan on the house on the second occasion in recognition of the fact that the food was even hotter than they’d expected—they’d apparently received a fresh batch of dried chillies and were also surprised by their pungency.

The bill for the second lunch.

The first lunch came to about $55 with tax and tip; the second to about $65. On both occasions we took a lot of food home. As you may be able to tell, at least four people could have eaten what we ate at each meal. So this works out—sans drinks—to between $14 and $16/head, which is just ludicrously good value. I wish they would move 20 miles down the road to our town. Rents are higher here than in Rosemount, probably, but they’d make a killing. Then again, proximity to the South Asian populations of the southern suburbs may be crucial to their being able to do what they do.

It was a one-man front of house on both occasions. We were served by one of the owners and he’s a very affable gent. I don’t know how things are when they’re busier but things were very good at both these lunches. They don’t do lunch buffets anymore—except on special occasions, I think he said—but if you’re dining solo at lunch they have a combo plate that will do you nicely for about $14. And if you like your food hot, ask for it at the “extra hot” setting. That’s how we got most things on both occasions and it was hotter than anything we’ve eaten at Grand Szechuan or On’s Kitchen in a while. On the second occasion, the lamb curry was almost unfeasibly hot, but it was still bloody tasty. But you don’t have to get things hot to enjoy the food here—even the milder dishes are very good and none of them are laden with nut pastes or cream.

We’ll be back again soon and my next review will probably take less than 3.5 years to appear. Next week, however, it’ll be back to either Thai food in St. Paul or Chinese in Minneapolis.