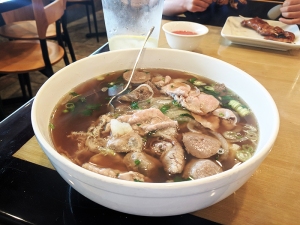 Following my reviews of Pho Everest in Lakeville, Cam Ranh Bay in Burnsville and Simplee Pho in Apple Valley, here is another report on a no-frills but solid Vietnamese place in the Twin Cities South Metro: Pho Valley in Apple Valley. They mostly sling pho and they’re in Apple Valley and hence the name, I assume. They’ve been open somewhere between one and two years and are located in the mega strip mall at the intersection of Cedar Avenue and 150th/County Road 42. It’s a larger restaurant than Simplee Pho but has a more limited menu. On the plus side, most of what I’ve had of what they put out has been mostly pretty solid.

As I note every time I review a Vietnamese restaurant in Minnesota, it’s no surprise that Vietnamese food is making deeper and deeper inroads into the state. Quite apart from the fact that we have a large Vietnamese population here, the food sold at most of these restaurants is very compatible with the stereotypically cautious upper midwestern palate. You’re never going to do badly selling rice noodles in beef broth (with meatballs or other beef cuts) in this area; and most restaurants hedge their bets with ye olde Chinese-American classics.

So it is with Simplee Pho, and so it is with Pho Valley. Their main business is pho but they have General Tso’s chicken, kung pao chicken, sweet and sour chicken, sesame chicken, lo mein etc, for those who want those things as well/instead. I cannot report on the quality of those dishes. On my recent lunch visits I have seen a fair number of people order from that section of the menu, but the majority seem to be ordering pho. This has included both Vietnamese families and white customers, at least some of whom seem to be from nearby businesses. Hopefully with time they will diversify the Vietnamese sections of their menu which currently—beyond noodle soups—comprises only a few variations on bun and broken rice plates and a grilled pork banh mi.

The good news is that the stuff they do make is generally pretty good. Their spring rolls are very good—and I like the accompanying peanut sauce with a dollop of chilli paste. The grilled meats are likewise very good: our boys enjoy both their chicken and pork skewers and their grilled pork and broken rice plate. Their pho broth has been excellent on both my visits: intense flavour and viscous texture; and the meats in it have been very good as well. Alas, their bun bo hue was not too my taste: too thin both in terms of texture and flavour. I have not yet tried their banh mi.

Launch the slideshow for pictures of the restaurant and the food. Scroll down for thoughts on price and more of a comparison with Simplee Pho. 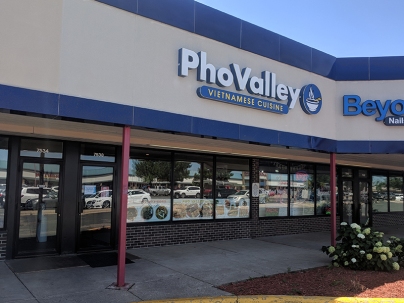 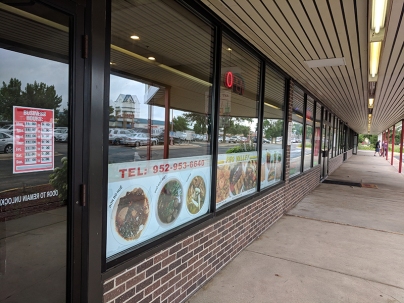 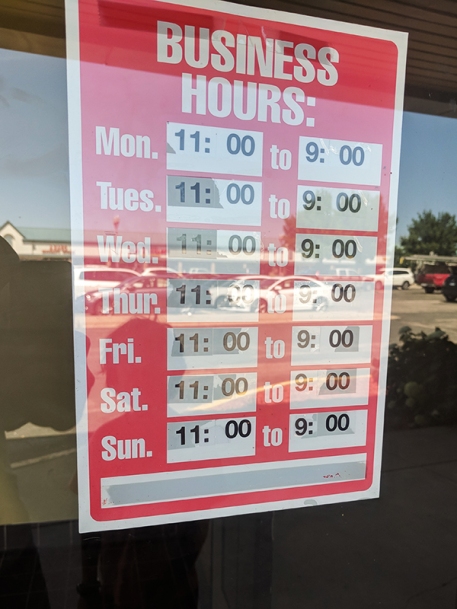 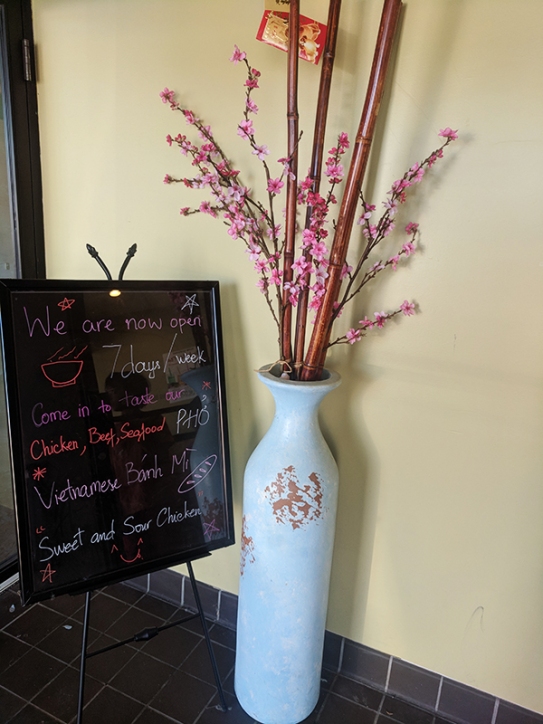 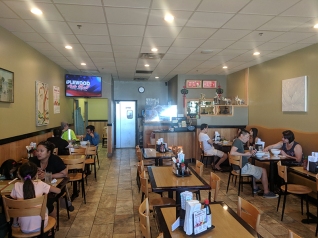 This was at our first visit—it had filled up nicely by the time we left. 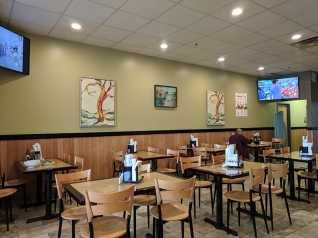 And this picture of an empty restaurant was taken right after they opened on a weekday. Again, they filled up as the lunch crowd came in. 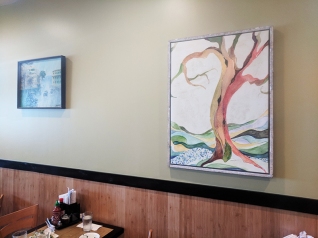 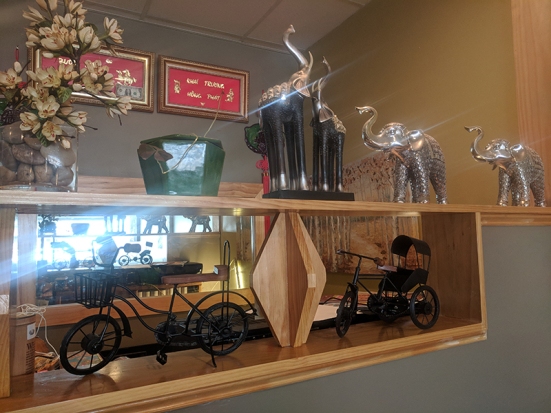 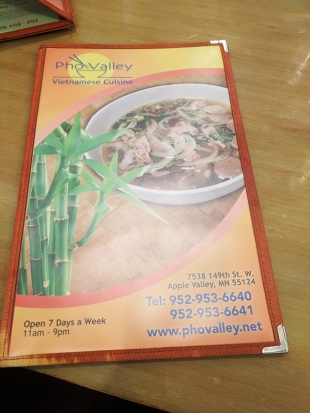 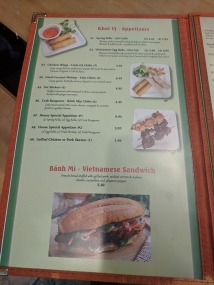 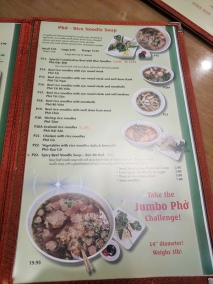 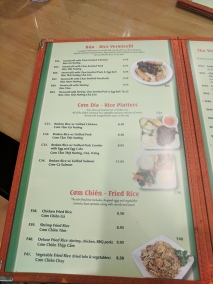 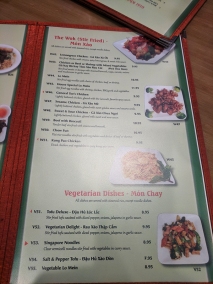 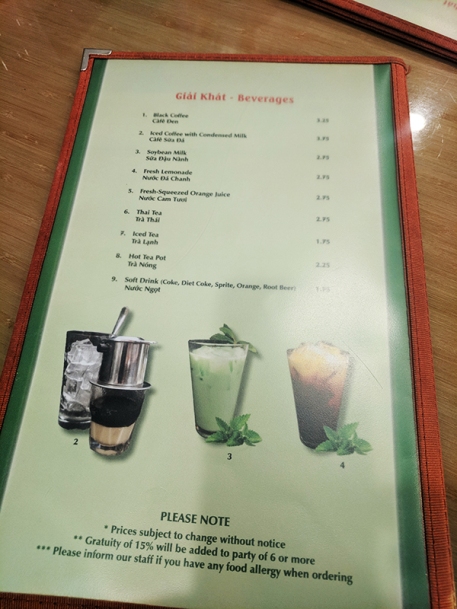 They also have boba. 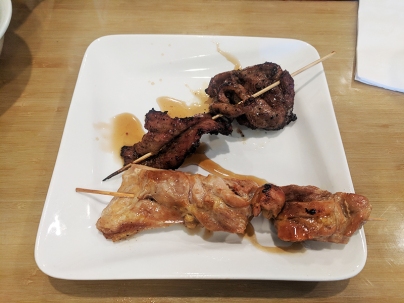 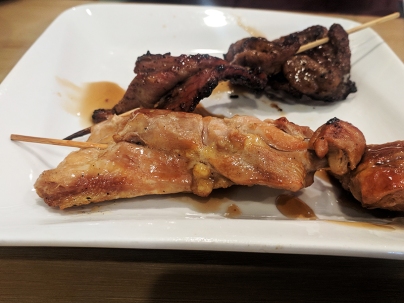 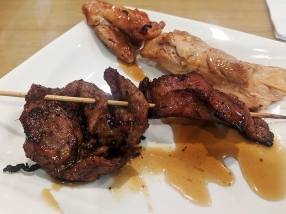 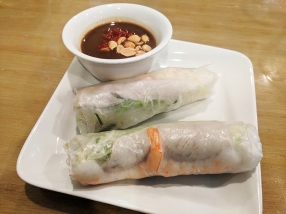 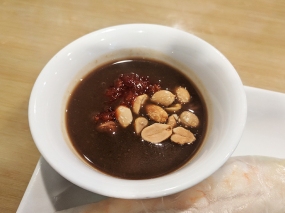 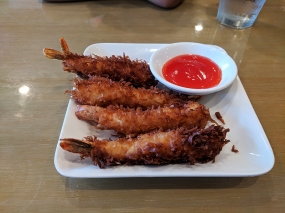 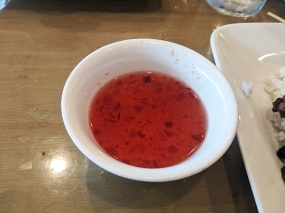 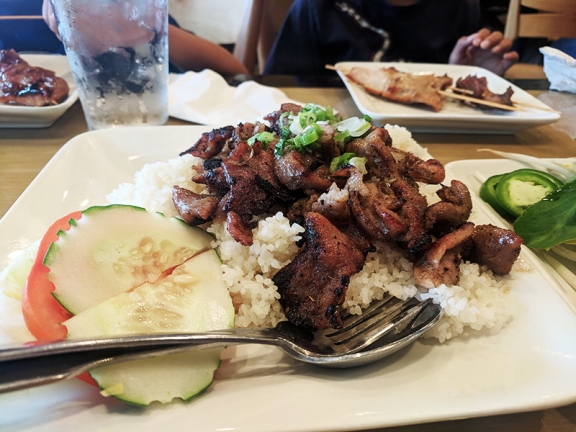 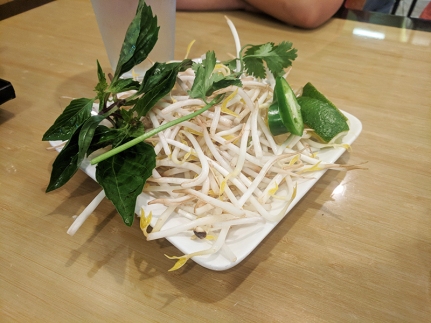 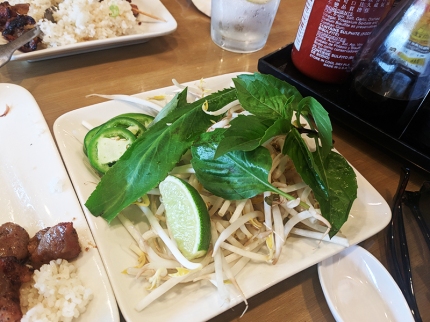 The second time, some culantro/sawtooth and no cilantro. 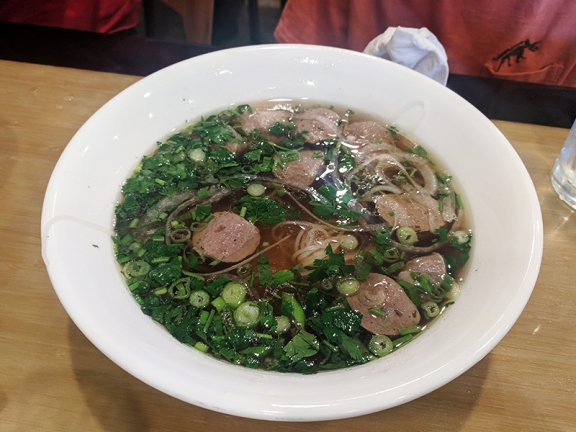 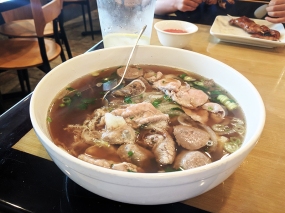 This is the one with tendon and tripe (though the latter is not listed). 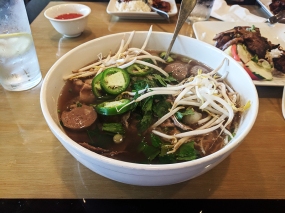 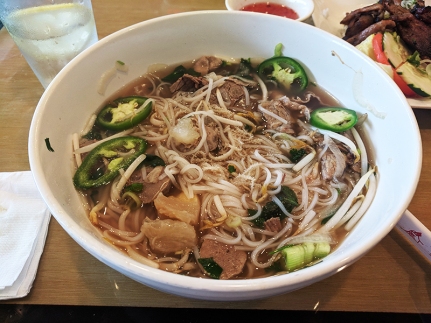 The tendon was cooked perfectly to a soft and melting state. 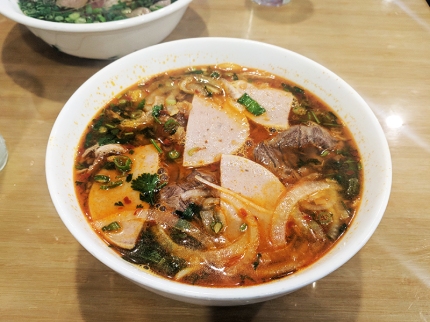 Alas, while the meats in there were good, the soup tasted like pho broth with chilli sauce added.

Price-wise, I want to say that it’s a bit more than Simplee Pho but on par with most of the competition in the Twin Cities. The service has not been tight on my recent visits but that’s not really a huge consideration at a place like this. As for the food, I’d say that the pho broth here has been better than at Simplee Pho and might well be the best in the area. On the other hand, Simplee Pho’s bun bo hue is much better and that’s what I normally get noodle soup-wise. Simplee Pho’s special dishes are also more interesting than the non-noodle soup dishes on offer here. In sum, I will be going here for pho and to Simplee Pho for bun bo hue and shaking beef. Now, won’t somebody open a pho place in the college town 20 minutes south?

By the way, I think I may have run out of places to write up in the 35/Cedar Avenue corridor. If there are other restaurants—southeast Asian or otherwise—that you think are worth a look in the Lakeville-Apple Valley-Burnsville-Eagan area, please write in below.

Next on the blog: my tour of the Aberlour distillery in Scotland. Next from the Twin Cities food scene, probably another market report.