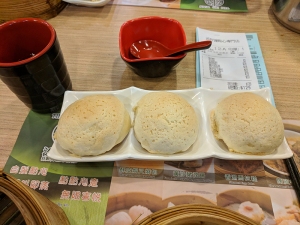 Here finally is my last food report from my Hong Kong trip in December. As on our previous visit in 2016, I inaugurated my eating at Crystal Jade at the airport not too long after landing; but on this occasion I did not eat my last meal there as well. Instead, I took the opportunity offered by traveling alone to eat at Tim Ho Wan’s Hong Kong station outlet. We’d tried to do this on the last trip too but the line was very long on every occasion that we passed it and our kids were in no mood to stand in it. The line was quite long this time too but I stood in it and it moved fast enough to not be a trial. Was the food worth it? Yes, it was.

Tim Ho Wan, as you may know, was opened about 10 years ago by a chef from Lung King Heen, at pretty much the opposite end of the dim sum price spectrum. The original location is in Mongkok in Kowloon—a 20-seater, at least when it opened—and it earned a Michelin star not too long after it opened. In the years since a number of branches have opened all over Southeast Asia, in Australia, and as of a few years ago in the US (in NYC). Some of the other Hong Kong branches have since received a Michelin star as well—though I’m not sure if all have maintained them. The Hong Kong station branch I ate at is not one of those branches but it’s also the branch you can eat at after checking your luggage in at the Airport Express counter on the way to the airport.

The line, as I said, was long when I got there, but it did move fast. Well, it didn’t move very fast—it would still have been a gigantic pain with two antsy brats—but I don’t think I waited more than 20 minutes or so. The line was quite a bit longer when I got to its head, and even longer when I left, so who knows? maybe I got lucky. Part of what speeds up the process is that you take an order sheet and fill out what you want while you’re in the line and they start bringing out your food not too long after you sit down. As the menu is not long—mostly just classic dim sum standards—the kitchen moves very fast. And to make sure you don’t linger, the communal tables that are the majority of the seating are not terribly comfortable. I only had a camera backpack but even without any luggage you’ll be shoulder to shoulder and banging knees with strangers. It’s all worth it for the food though.

I’d had my last bowl of congee at Law Fu Kee that morning but didn’t let that stop me from ordering too much food for one person. I got one order each of hargow (4 pcs), chiu chow style dumplings (3 pcs), fried turnip cakes (3 pcs), steamed rice rolls with shrimp (2 large pcs) and their signature baked bbq pork buns (3 pcs). Looking around at my neighbours’ orders I was tempted to make an offer of a cooperative so everyone could get one piece of most of everything on the menu and not leave anything behind, as a few people were reluctantly forced to do. I did manage to finish everything I ordered except two of the exceptional pork buns—which more than lived up to their billing—but I had those packed to go and ate them lukewarm at my gate at the airport a few hours later (and they were still excellent).

For pictures of the restaurant and the food, launch the slideshow below (and remember you can launch larger versions of the images from the bottom right of the slideshow). Scroll down to see how much it cost, and how I would rate it compared to the other dim sum I’ve eaten in Hong Kong and also to the best of the San Gabriel Valley. 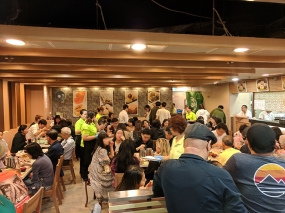 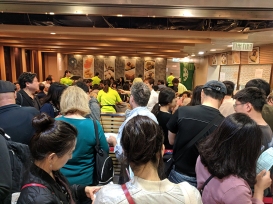 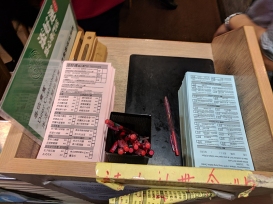 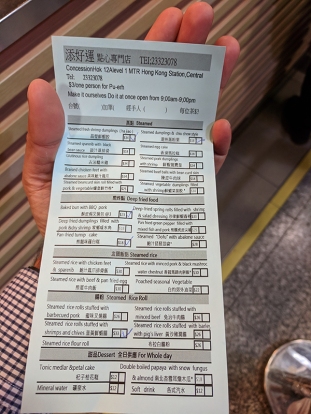 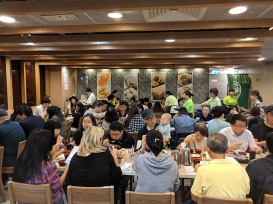 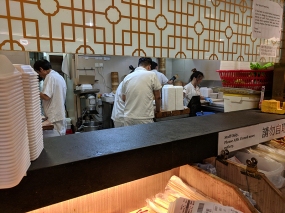 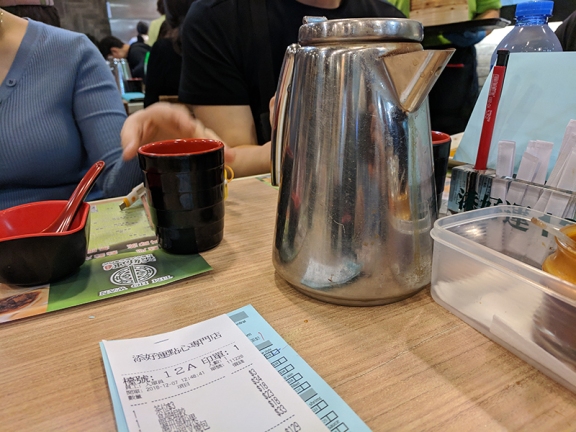 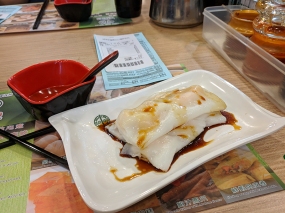 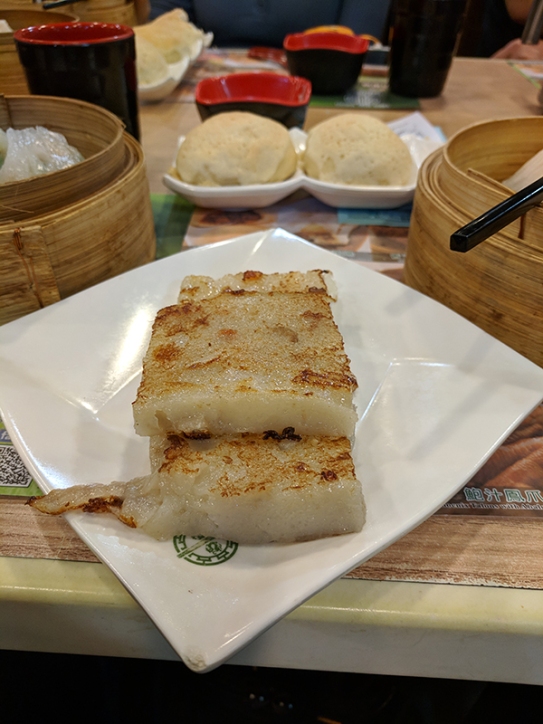 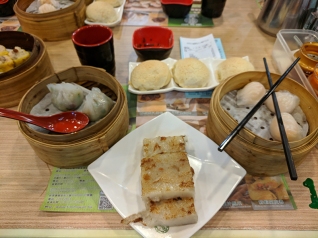 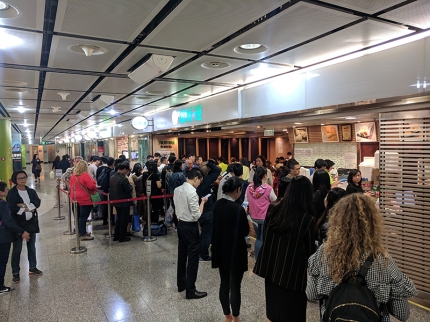 The restaurant is “cash only” and I did not manage to preserve my bill but I want to say that the total was about $140 HKD or about $20 USD. Two or three people eating together would get out for quite a bit less per head. In other words, a complete screaming value for far better dim sum than I’ve eaten anywhere in the US. Yes, they have a much smaller menu than your average dim sum palace—even most places in Minnesota have larger menus—but every single thing I ate was better than the best iterations I’ve had at Sea Harbour or Elite in the San Gabriel Valley, and the baked pork bun was light-years ahead of any version in the US.

Compared to other Hong Kong dim sum specialists I would say the quality for most things was better than at Maxim’s Palace, if only because here everything comes directly from the kitchen, not having potentially gone around a cavernous dining room two or three times. Lei Garden, however, is in a different class. That said, Tim Ho Wan is not trying to be in that class—it’s much less formal, much cheaper—and it’s hard to imagine better quality at the price; though I suspect the Kowloon locations may in fact offer that. Maybe on my next trip—tentatively scheduled for December 2020—I’ll be able to confirm that one way or the other.

Well, I’m done with my Hong Kong food reports for now, but I’m not completely done with Hong Kong. On Thursday I’ll have a brief look at an excellent whisky bar I spent some time in on my first night in the city. After that it’ll be off to Bombay and London, with a few Twin Cities stops interspersed.