My renewed slow-motion survey of Indian restaurants in the Twin Cities metro continues. The last stop was at Persis Biryani Indian Grill in Eagan back in February (see that post to see why I started this survey back up after the disaster that was my previous attempt to explore the local Indian restaurant scene). At the time that I reviewed Persis a number of people online waxed rhapsodic as well about the branch of Bay Leaf in Eagan, about a mile or so from Persis (the original location is in Eden Prairie). It took us a while to get there but last night we finally got there. How was the meal? Read on.

A quick description first of the restaurant. Like Persis, it is located in a mega strip mall and it is quite large—larger, in fact, than Persis. And there’s far more natural light streaming in through the large windows that make up the entire front of the restaurant (granted we were at Persis in a much darker month). The decor here is of the old orientalist-lite school but it’s nothing too cheesy. We arrived at 6 pm (on a Saturday), a party of 10 with a reservation (7 adults, 3 kids), and found they were quite busy—there appeared to be a large party in the main dining room that may have been celebrating a birthday or something. I don’t know if they were short-staffed last night—we only saw two servers all evening—but they seemed very harried. Our table had not been set up and it took them a while to do so and then to take our order. The server who was visible wanted nothing to do with us and the server who was supposed to be in charge of us was not visible. I eventually connected with a woman who may be the manager or perhaps a proprietor and she had me come over to the bar to order (the friends we usually dine with are happy—or at least willing—to leave the ordering to me; we always get food family style at Asian restaurants). The takeout orders (of which they seem to do a brisk business) also seemed to be backed up at the bar.

Happily, the food did not take overly long to come out once we did get our order in, though some things took longer than others, a few things were seemingly forgotten till we reminded them and some things came out later in the meal than they should have. More on this below. First let’s get to what we ate (rather a lot):

Many of the dishes came with steamed rice. In addition we got a couple of butter naans, a couple of tandoori rotis and one lachha paratha. The breads were uniformly good.

For pictures of the restaurant and the food launch the slideshow below. Scroll down for thoughts on the service (not a high point), cost and value. 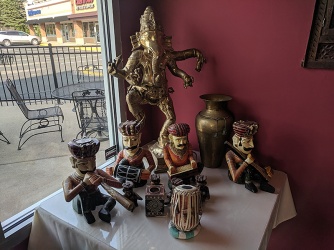 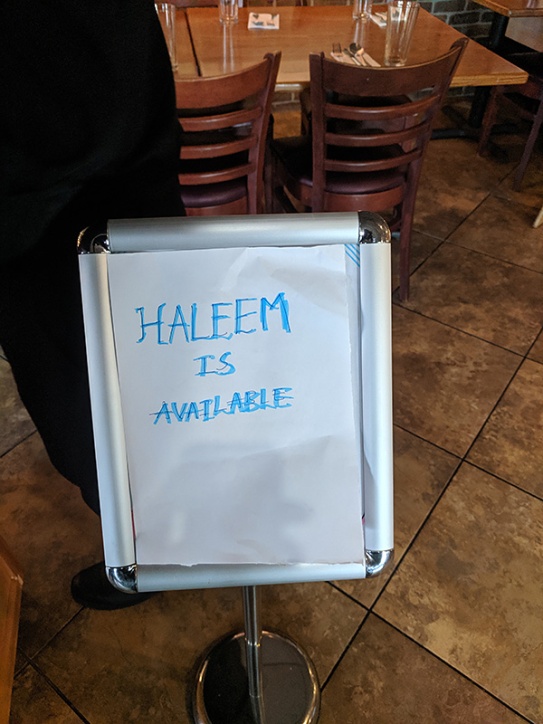 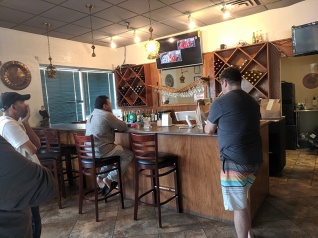 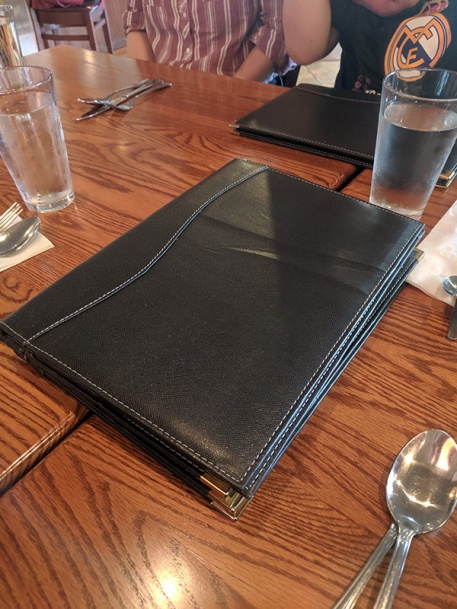 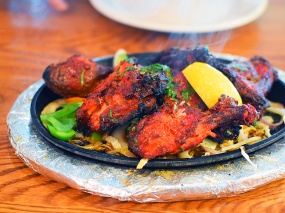 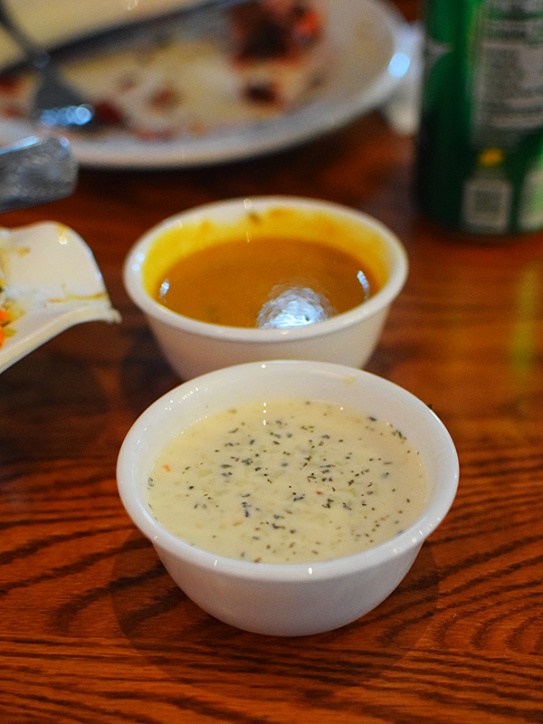 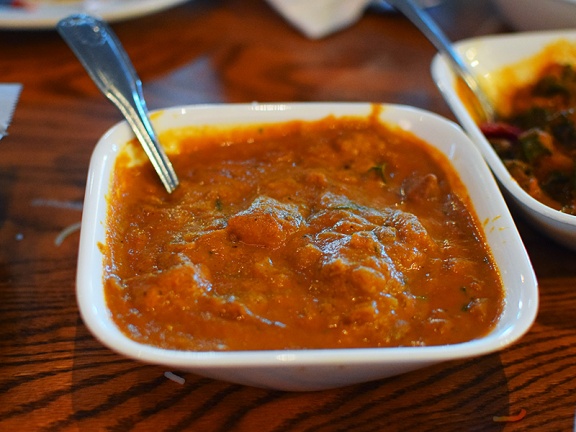 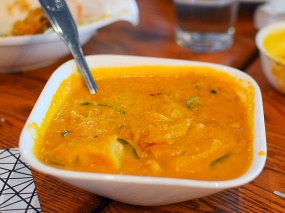 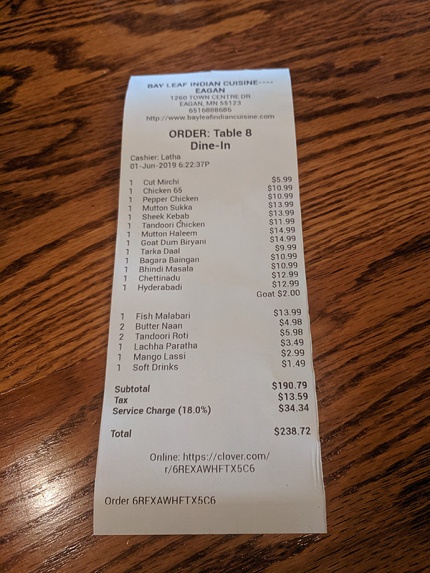 All of this plus a mango lassi, a sprite, tax and tip came to just below $240. Counting the three kids as one adult, that brought us to $30/head. But it was enough food for 10 adults (we took a lot of leftovers home); so really more like $24/head—though keep in mind that we did not drink any alcohol.

Service, as I noted, was rather harried. Again, I don’t know if this is because they are currently short-staffed but the issue wasn’t simply that the servers were stretched too thin. The behaviour of one of the servers was somewhat unprofessional—directly ignoring our attempts to order, all but waving off our attempts to flag him down, not going to find someone else to serve us etc. Once the party group got done, things calmed down but we were well into our meal by then. The kids’ drinks were not brought out till the meal was halfway done, and that after our asking a couple of times. The naans and rotis likewise took forever to come out despite our asking. And the dal came out last.

The other odd thing was at time of payment. The woman who’d taken the order came over and told us our total. I asked if it included the tip and she said, yes, it includes the service charge. But when I went through their handheld card payment screen it gave me the tip selection. Confused, I asked her again if tip was included. Service charge is included, she said, tip is up to you. A friend who was looking at the bill pointed out that the service charge was 18%. Now, I have no objection to an 18% service charge being added to a bill for a party of 10 (even if the service wasn’t great) but I was not amused by what seemed like an attempt to get us to pay both the service charge and a tip. And I can imagine someone not paying attention and tipping 33% to 38%.

These issues aside, it was a tasty meal. Some things were too sweet—the fish curry, the okra—and the mutton was uniformly either too bony or inconsistently tender but, on the whole, it was a good meal for the price. I’d say it was clearly better than Darbar in Apple Valley but I will also say that for most things ordered at both places, I preferred Persis’ rendition to Bay Leaf’s. Keep in mind, of course, that at neither place did we order the North Indian all-stars beyond the kids’ tandoori chicken and breads and seekh kababs. I have no idea how the two compare on that front (or how their lunch buffets compare). But while I wouldn’t be unhappy to eat again at Bay Leaf, I’m far likelier to go back to Persis first.

Okay, I think my next Indian report will be from Surabhi in Bloomington—not sure when that will be though as June is jammed and my parents will be visiting in July (and Indian restaurants are not high on their agenda here). The next Twin Cities meal report will be much sooner than that. We are scheduled to eat at the Handsome Hog in St. Paul next weekend.