Tenant opened in the old Piccolo space, just a month or so after that great restaurant closed in the spring of 2017 (though in Minnesota it may still have been winter). We tried to go eat there a few times that first year but it wasn’t until the fall of 2018 that we finally managed it. We really liked that meal and wanted to go back a lot sooner than in another year and a half. Alas, between our schedules, travel and the difficulty of scoring seats at the tiny restaurant it was almost another year before we made it back for our second meal. That was last weekend. We liked this meal even more and I think we are both ready to say that it may in fact now be our favourite and quite likely the best fine dining restaurant in the Twin Cities metro. Depending on your view of fine dining in the Twin Cities you may think this faint or high praise but either way Tenant is very good indeed. And we are already plotting a return in September.

We were joined at this meal by friends who ate with us at Piccolo on a few occasions and who shared our very high opinion of Doug Flicker’s little gem. They really liked the meal as well, one of them musing that from top to bottom he might have enjoyed this meal more than any full meal he’d eaten at Piccolo. I’m not ready to go quite so far but it’s also time to ditch the Piccolo comparisons. Tenant is very much a restaurant with an identity of its own and it is very much not a Piccolo clone. It has one eye—like Piccolo—on Italian cuisine, but across both our meals it’s clear that the other eye is on Japan (by way of Copenhagen). The proof of how assured their vision and execution is lies in how seamlessly the meal transitioned between those two poles.

We were once again seated at the counter, two seats each across the turn which made it easy enough for conversation. It also made it possible for conversation with the chefs, both when they brought each course out and in between. It’s a very warm and easygoing atmosphere at Tenant and the small scale and staggered service that they do makes for a very calm eating experience—which is not what I would say about Spoon & Stable, Meritage or Alma, our other nominees for best fine dining restaurant in the Cities.You should know, however, if you haven’t been already, that if you’re in the first seating you’re expected to give your seats up when the precisely timed meal ends; they’re not built for diners lingering after their check is paid. (You should also try to show up if you’ve made a reservation or to not cancel just the day before; it’s hard for a restaurant of this small scale to absorb flakiness.)

You should also know—if like us at this meal you have not been in a year—that prices have gone up. Last year it was $50/head for the six course menu and $25/head for the wine pairing. Their website still says this but those prices are now $60 and $30/head respectively. This takes the meal out of the territory of a steal for the quality and plumps it down firmly in the territory of good value. We ended up paying about $97/head with tax and tip which is on par with our most recent meal at Spoon & Stable and quite a bit less than our most recent meal at Alma. But enough about the price, on to the food!

They still do not furnish a menu or printed descriptions of the dishes when you sit down. Each course is described verbally when it is brought out but good luck trying to remember more than a few element of every dish. Thankfully, as on the last occasion, they kindly emailed me details on the courses.

I believe the chefs made a trip to Japan in the last year. Here’s the proof that they spent their time there well. The contrast between the seared flank steak—studded with salt crystals—and the acidic bite and snap of the veg was excellent. The salsa verde—more like aioli really—tied the two parts of the bowl together perfectly. My only complaint was that the shape of the custom-made bowl made eating this dish a little more fussy than it needed to be. (This mild complaint is one of only two I had over the course of the entire meal.)

The second course took a sharp Italian turn but the tart whey butter sauce and the goat cheese (bucheron, I think) in one of the two perfect lozenges of pasta maintained through lines to the first course. The sauce may indeed have been my favourite component of this dish and I enjoyed sopping it up with their sourdough focaccia—they said they started making their own bread after one customer too many complained about not being able to sop up their sauces.

They had a version of this course at our first dinner and we loved that dish. The components here were completely different and we loved this even more. I will be corrected soon if wrong but I think this may have been everyone’s favourite dish. Wonderful balance of flavours and textures and wonderful use of umami.

Back to Europe with this one—for the most part. The scallop was perfect as was the pile of vegetable things it sat on. The dill yogurt was excellent as well (and maintained that acidic through line). Alas, the crispy eggplant was not to any of our taste. It was fried to a nice crisp which made for excellent textural contrast but the eggplant itself was hard to the point of being crunchy. This may be intentional but I have never wanted to eat crunchy eggplant and this did not make me a convert. If they had only served up something closer to Golden Horseshoe’s excellent dry-fried eggplant this plate would have been over the top.

The fifth course was squarely at the border of Italy and France. The cappelletti were perfectly made—as the pastas here always seem to be—and the pork filling was excellent; the morels on top threatened to take it over the top. But it was the ratatouille the cappelleti were sitting on that I wanted an entire bowl of.

Tart, tart, tart. Too tart, said two of the party, but once I adjusted to the shock of the first bite I rather liked the second and third.

Nobody had any complaints though about the actual dessert which was just excellent. I am hard pressed to remember a better dessert I’ve had in the Cities in the last year. The same crew made the dessert at Piccolo in the last years of its run but somehow dessert had always seemed the closest thing there was to a weak link there. The explanation may lie in the bigger portions at Tenant and the fact that at both our meals the dessert has involved more the more sensual pleasures of custard than some of the more cerebral constructions at Piccolo.

For pictures of all this excellent food and some more of the space, please launch the slideshow below. Scroll down for more thoughts on value and service and to see what’s coming next. 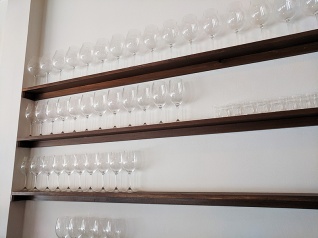 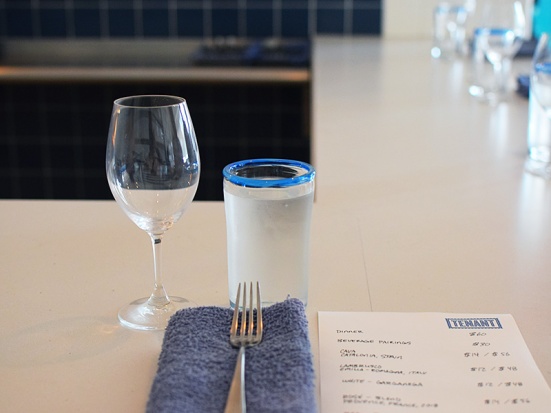 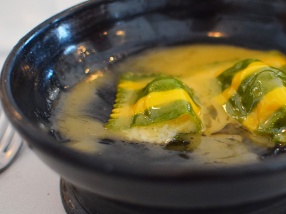 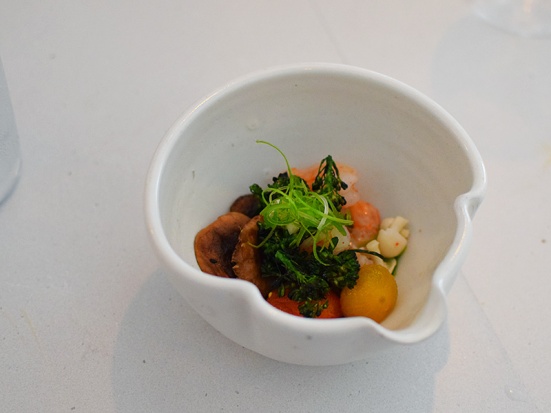 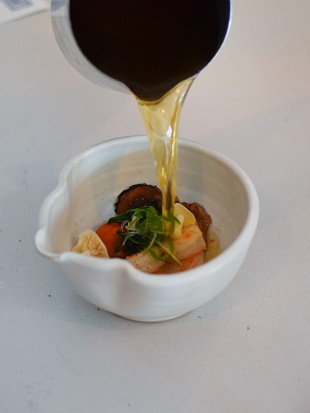 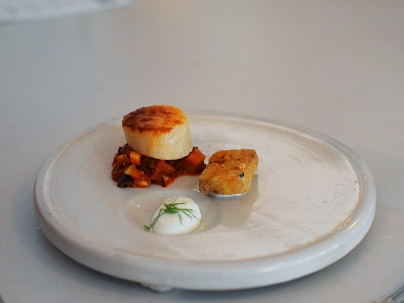 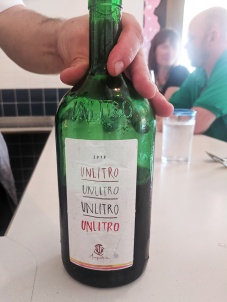 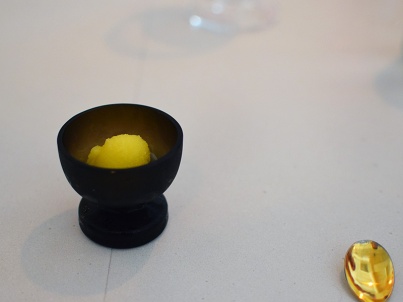 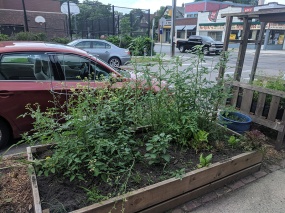 These are out front. I assume they grow things for the restaurant kitchen.

So, let’s talk about the price once again, and keep in mind that two of us got the wine pairing which amounted to large pours of three wines. At $97/head all-in it’s quite a bit more than we paid at In Bloom, Hyacinth or Popol Vuh—to take only three recent high-end meals in the Cities that we enjoyed a lot. But I would say it is still a good value for what it is. And what it is is something quite unique in the area. The multiple smaller portions and the eclecticism of the cuisine may not be to everyone’s taste, and this is certainly not the place for a boisterous night out. But if you’re willing to be pushed a bit I think you’ll also find that most everything is enjoyable both sensually and intellectually. And you will not leave hungry (in case you’re worried about that). And service, as I’ve said, is relaxed and easygoing—this is no intimidating temple of high cuisine.

All of which makes me wonder why Tenant does not get more run from the local food press. Yes, they were reviewed when they opened and yes, the major reviewers were complimentary (though one was somewhat mealy-mouthed about it, I thought); but when you see how much online ink is spilled on an ongoing basis on the clown show at Travail and on the ins and outs of various other restaurants whose key figures seem more plugged into the coverage ecosystem, it doesn’t quite add up. On the one hand, the Twin Cities food media is forever exhibiting its anxiety about the local restaurant scene as seen from the coasts; on the other, they don’t seem to tout enough actual interesting things happening here (see also the lack of coverage of the excellent Golden Horseshoe Sichuan residency that ends at Cook St. Paul this weekend). Ah well.

Up next from the food end of things: another Toronto report and another North Shore report. My next local report will be (hopefully) of the last dinner at Golden Horseshoe—we are scheduled to descend on them one last time on Sunday; hopefully things will go according to plan (the missus is out of town and only returns the previous evening).