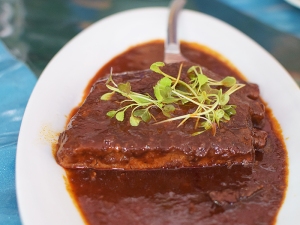 This was the third of three Indian meals I ate in New York in August. The Bombay Bread Bar was the latest of renowned chef, Floyd Cardoz’ Indian restaurants. I never had a chance to eat at Tabla, Cardoz’ most successful restaurant, in operation from 1998 to 2010. Along with Tamarind under Raji Jallepalli*, Tabla was one of the few restaurants in that period that attempted to move Indian restaurant food in the US past the established cliches. Despite its longevity, however, it did not really spark a movement. Now the zeitgesit has caught up to Cardoz. New York alone is full of restaurants serving modern and regional Indian dishes, in rooms that are trendy and playful (see Adda and Baar Baar, for example). It made sense then that in 2016, after several years helming non-Indian restaurants, he made a return to this culinary space with Paowalla. But it didn’t stick, and in 2018 the concept was switched to the more casual Bombay Bread Bar. This was apparently more successful but not successful enough to keep it in business. It was announced in July that the restaurant would close in September. Nonetheless, I wanted to eat there. Having tried Cardoz’ updated take on Goan food in Bombay (at O Pedro), I was curious to see what he had been up to here.

We ate lunch there with an old high-school friend. Paowalla and then Bombay Bread Bar had been her favourite Indian restaurant in New York and it was an odd chance that our first and her last meal there should happen together.

We arrived a little after opening time on a Saturday to find the doors locked and other diners waiting. For a moment I thought that they’d called it a day a month early but then we noticed staff moving around inside. They seemed completely oblivious to the people standing out front but eventually got around to letting us in. We went in to find a large and bright restaurant, with a long bar and counter space opening up into a small dining room. The aesthetic was decidedly eclectic. Some of this eclecticism was to my taste, some of it less so. Alas, that Hatecopy mural in the dining room felt a bit like someone was trying too hard to signal being young and edgy—which is how I feel in general about Hatecopy (though it must be admitted that I have not been young for a while now and have rarely been accused of being edgy). Our reservation was not really necessary. Though the restaurant was not empty it didn’t come anywhere close to filling up while we were there. If its aficionados were bummed by its impending closure they didn’t seem to be taking every opportunity to eat there while they could. But what of the food?

The lunch menu was compressed but had lots of things on it that looked interesting. Despite being just three adults and two kids we ordered a fair amount. From the “Small Plates” section we got the goat curry and green chickpea samosa, the bhelpuri, and the upma polenta with chanterelles. This was a mixed bag. The filling of the samosas was tasty but the samosas themselves were too dense and baked rather than fried. And at $16 for two pieces this seemed rather egregiously over-priced. The bhelpuri was fine but nothing to get excited about. The upma, however, rich and in the porridgy end of the upma spectrum, was rather nice. The chanterelles worked well texturally and imparted a nice nutty flavour to the semolina, made extra luscious by the use of coconut milk. We also got a few breads and chutneys. Despite the name of the restaurant neither the naans nor the lachha paratha were anything very special. Indeed, the lachha paratha was too crisp. The chutneys were nice though.

We had better luck with the larger plates. From the “Tiffin Brunch” menu the choriz-bacon biryani—served with two fried eggs on top—was very tasty, and the boondi raita we got to go with it was good too. From the “Large Plates” section the Goan pork ribs vindaloo was rather good and appropriately priced at $27. However, while the chicken tikkas were in a tasty marinade they were too large and as a result too dense (i.e the marinade did not penetrate very far past the surface). And it was hard to understand why this cost $25.

To take a look at the space and the food, launch the slideshow below. Scroll down for thoughts on service and to see how much it cost.

A lot of blue, inside and out. 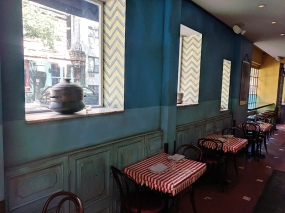 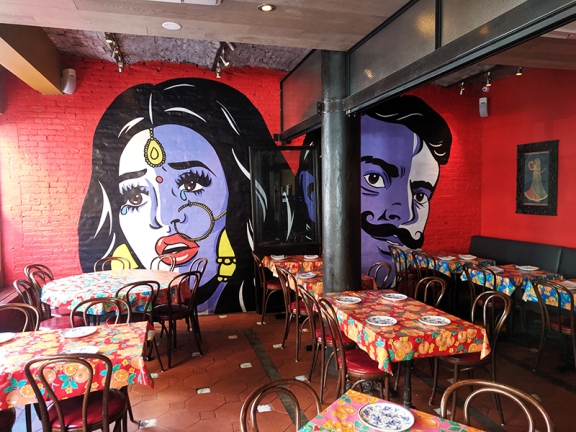 What has become of this ugly mural? Also, why was it considered a good idea to have a large picture of a weeping woman staring at people as they ate? 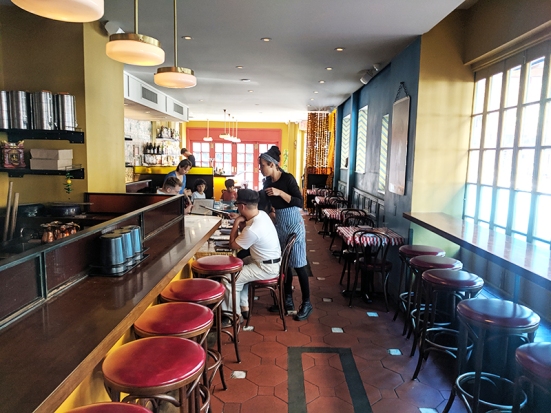 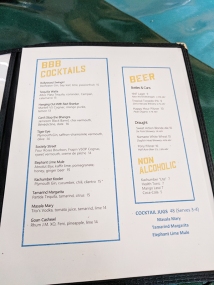 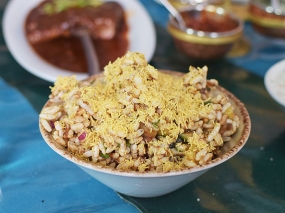 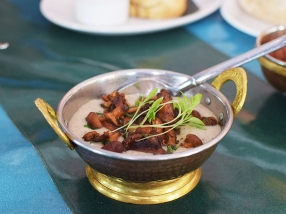 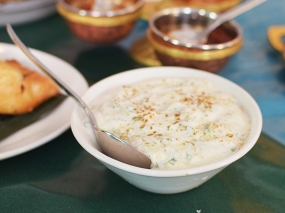 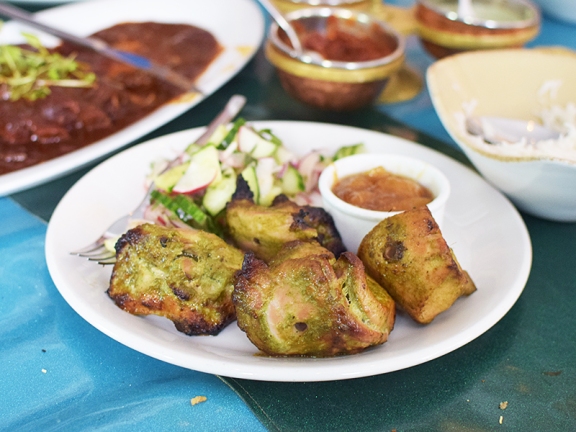 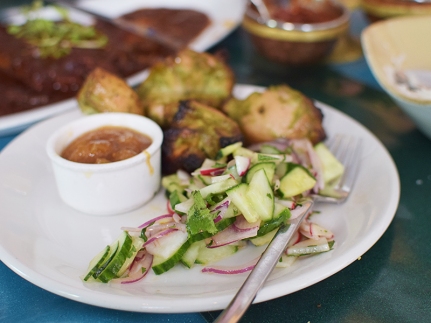 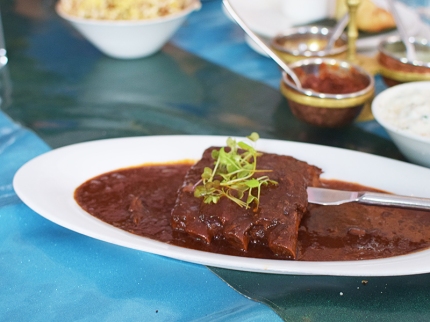 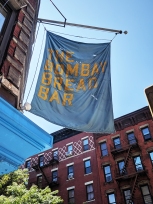 Who got to keep this banner?

Service was a little scattered but friendly—it’s hard to ping a restaurant for scattered service, however, when they are a month from closing. Once again, as at Adda and Baar Baar, we did not see a single desi face in the front of the house. Is it against the law in New York for trendy Indian restaurants to employ South Asian servers? Price? All of this plus tax and tip came to just about $200. Considering that we didn’t drink any alcohol that does seem a bit much. It was probably enough food for five adults and $40/head is probably not bad for New York, but we didn’t walk away feeling like we had gotten a steal. That said, the food here was quite a bit better than at Baar Baar (where we paid far more—with drinks). By the same token, I thought dinner at Adda was superior.

Now as to why places like Adda and Baar Baar—and the other new mod Indian places—should seemingly be successful in New York while the Bombay Bread Bar closed unexpectedly, I don’t know. Cardoz said some regrettable things in announcing the closing—singling out the raising of minimum wage as a precipitating problem (he walked some of this back later). I don’t really understand the economics of New York neighbourhoods. Perhaps rent in the East Village (where Baar Baar is located) is lower than in Soho (where the Bombay Bread Bar is located). Adda’s rent in Long Island City must surely be lower. Certainly both of those restaurants were packing the crowds in on weeknights. It does seem ironic, and not very fair, that Cardoz is having difficulty riding the very culinary wave that he was far ahead of in New York. Perhaps his next spot will fare better. I certainly wish him luck. My own (probably bad) advice would be to open a smaller restaurant and import the O Pedro menu wholesale from Bombay—that menu would kill in New York.

Okay, only two more reports from our New York trip to go: more pizza and even more casual food etc. at Coney Island. I should be done with those within the next week.

*Please read Mayukh Sen’s excellent profile of Raji Jallepalli, a pathbreaking chef who passed away at the age of 52 and who has never received her proper due.